This article describes the cultural association. For the culture magazine see the article Frankfurter Museum

Foundation of the museum society

In 1808 Frankfurt citizens founded the museum , a society for the “care of the muses” and for the promotion of the fine arts: literature, visual arts and music. Among the founders of the museum were the librarian of the prince Carl Theodor von Dalberg , Nikolaus Vogt , the senior building officer Clemens Wenzeslaus Coudray and the city master builder Johann Friedrich Christian Hess . The association's statutes limited the number of members to 150. Since its inception, the society has also had symphonic music performed in its events known as the Great Museum . The orchestra of the Frankfurt Comoedienhaus , the later opera orchestra, was hired for this. Frankfurt's musical life experienced a great boom after the Napoleonic Wars . In 1817 Louis Spohr took over the management of the orchestra, and in the same year the pastor and historian Anton Kirchner became chairman of the Museum Society . Carl Guhr directed the orchestra from 1821 to 1848 . When he died in July of the revolutionary year 1848 , the Museum Society decided to appoint its own head of the music class . The municipal orchestra thus had two directors for the first time: Louis Schindelmeisser became Kapellmeister of the theater , while Franz Messer , director of the Cecilia Society since 1837 , now also directed the museum concerts. Until 1924 the city orchestra kept two artistic directors, one for the theater and one for the concert business.

The museum concerts in the hall

The hall of the Museum Society, the site of many premieres, destroyed in 1944 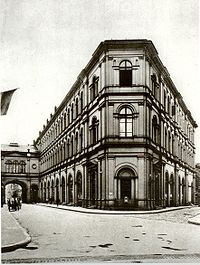 After 1848, the museum society concentrated more and more on music, although until 1886 it organized lectures with speakers such as Felix Dahn , Alfred Brehm and Richard von Helmholtz . From 1832 to 1860 the museum concerts took place in the large dining room of the Hotel Weidenbusch in Steinweg , which offered space for 1,000 visitors. In 1851 the Städel took over the important painting collections.

In 1860 Carl Müller took over the management of the museum concerts, who was also Messer's successor as conductor of the Cecilia Society . In 1861, the Society's concerts were relocated to the newly built hall building on Junghofstrasse, making them accessible to the general public. The hall, a work of the Frankfurt architect Heinrich Burnitz , had a concert hall with 1,800 seats and a small hall for lectures and chamber concerts, as well as the necessary ancillary rooms, as well as a banquet hall in the bridge over Junghofstrasse. The large hall measured 42 by 24 meters, was 14 meters high and had excellent acoustics. On November 18, 1861, it opened with a solemn performance of Joseph Haydn's Creation . For eight decades, until its destruction in 1944, it remained the focus of concert life in Frankfurt.

In addition to the orchestral concerts, the chamber music series was launched in 1870, at which Johannes Brahms appeared several times as a pianist and premiered some of his works. Since 1887, Richard Strauss has often conducted museum concerts . His symphonic poems Also sprach Zarathustra (1896) and Ein Heldenleben (1899) were premiered here, and he conducted the Symphonia domestica here at its European premiere in 1904.

Carl Müller retired in 1891. When choosing his successor, the personal union with the Cecilia Society, which had become a tradition, was broken for the first time. Gustav Kogel took over the museum concerts, while August Grüters, recommended by Johannes Brahms , became conductor of the Cecilia choir. Kogel modernized the program of the museum concerts, in which works by contemporary and foreign composers such as Tchaikovsky , Bruckner , Strauss and Dvořák were played with preference . Only one soloist was invited per concert evening, the orchestral works were now in the foreground.

In 1903 Kogel said goodbye. The museum chose Siegmund von Hausegger as his successor, but he moved to Munich in 1906. The museum concerts experienced a heyday between 1907 and 1920 under the direction of Willem Mengelberg . From 1915 to 1922 the composer Paul Hindemith also sat as concertmaster at the first desk.

When Mengelberg left in 1920 after a conflict with the press, a two-year interregnum followed, during which Wilhelm Furtwängler conducted 16 museum concerts. However, he did not accept the reputation of the museum society, which would have liked to win him over as chief conductor, and instead went to Berlin. The museum then entrusted its concerts to the young conductor Hermann Scherchen , a brilliant musician who, however, disturbed the audience with his commitment to the new music of Arnold Schönberg , Igor Stravinsky and Paul Hindemith, which was still unusual at the time . In 1924 Scherchen turned away from the Museum Society and turned to the newly founded Frankfurt Orchestra Association .

Thereupon Clemens Krauss , who had recently been hired as head of the opera, was appointed general music director, who for the first time since 1848 reunited the management of the opera and museum in one hand. After five extremely successful years, Krauss went to the Vienna State Opera . His successor was Hans Wilhelm Steinberg from Cologne, who had previously directed a stage in Prague. The Museum Society, however, resisted Steinberg's commitment as permanent conductor and instead negotiated with Issay (Isaac) Dobrowen , who conducted the majority of the museum concerts between 1929 and 1932, and with Otto Klemperer .

During the Great Depression of 1931/32, the Museum Society also got into economic difficulties, especially since the Frankfurter Rundfunk-Symphonie-Orchester , which had been under the direction of Hans Rosbaud since 1929, had rivaled the museum and had attracted numerous subscribers.

After the seizure of power of the Nazis , the new mayor was Friedrich Krebs ex officio of the Board of Museum Society officio member, trying and in this function. a. to install Hermann Abendroth, who has been shown loyal to the line, as the new museum conductor. The museum society, however, resisted the synchronization and a quick refilling of the position. Georg Ludwig Jochum led the museum concerts as a permanent guest conductor for five years, which were temporarily merged with the concerts of the “Reichssender Frankfurt” (previously “Südwestdeutscher Rundfunk”). It was not until the 1937/38 season that Frankfurt received Franz Konwitschny again as a general music director, who maintained operations until the opera house and the auditorium were destroyed on March 22, 1944.

The museum concerts in the post-war period

The museum orchestra after a concert in the Great Hall of the Alte Oper, 2007

After the Second World War , the museum concerts were resumed in 1946, initially in the hall of the Neue Börse . From 1952 the symphony concerts took place in the renovated theater , which since then has served as the “Big House” for the opera. The chamber concerts were first held in the broadcasting hall of the old broadcasting house, later in the Cantate hall and finally in the Deutsche Bank hall on Junghofstrasse, where the hall had been located until the war.

Since 1981, all of the Society's concerts have been held in the Old Opera , which has been rebuilt as a concert hall . The respective general music director of the Frankfurt Opera is responsible for the artistic direction of the museum concerts. Since the 2008/2009 season this has been Sebastian Weigle .