Zelenograd ( Russian Зеленогра́д , literally: "Green City") is one of twelve Moscow administrative districts ( Okrugs ), but geographically it is an independent urban settlement area . It forms an enclave within Moscow Oblast . Zelenograd is located around 37 km northwest of Moscow city center, outside the motorway ring, and has 221,712 inhabitants (as of October 14, 2010). 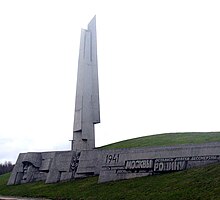 “Bayonets” - memorial for heroes of the Second World War

Zelenograd is known as the "Russian Silicon Valley ". It was built from 1958 as a “ socialist city ” on what had been a forested area until then, received city rights in 1963 and was inaccessible to foreign visitors until 1991, when it became an administrative district of Moscow. The most important microchip , laser , micro and nanoelectronic production facilities in the Soviet Union were built in Zelenograd. Several research institutes are also based here, most notably the National Research University for Electronic Technology (MIET), Sitronics and Rossijskaya Electronics . In addition, Zelenograd is the seat of an important business school, the MSABA, with its own university incubator .

In the south-western part of Zelenograd, the district of Krjukowo is located on the site of the village of the same name, which played an important role in the 1941 Battle of Moscow , as the German Wehrmacht encountered fierce resistance here as it marched on the capital and could be stopped. Moscow Sheremetyevo Airport is located a little east of Zelenograd . Zelenograd is connected to the Moscow - Tver - Saint Petersburg motorway as well as the corresponding railway line .

Sons and Daughters of Zelenograd