The title of this article is ambiguous. Further meanings are listed under MKAD (disambiguation) .

Traffic jam on the MKAD 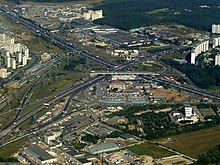 Motorway intersection of the MKAD with the M2 in southern Moscow

MKAD ( Russian МКАД , short for Московская кольцевая автомобильная дорога / Moskowskaja kolzewaja awtomobilnaja doroga ; German Moscow motorway ring ) is the name of the motorway ring around Moscow . It was completed in 1962 and has a length of 108.9 km. Originally it was predominantly four-lane and still had a few level crossings. In the mid-1990s, it was expanded into a ten-lane motorway in sections, with the right-hand lanes being partly used by local public transport buses.

The maximum permitted speed on the MKAD is 100 km / h.

The construction of the motorway began at the end of 1956 at Jaroslawler Chaussee . The first section was opened to traffic in 1960.

In 1962 the whole ring was passable. The motorway ring originally consisted of two double lanes, each 7 meters wide. On the route, the Moskva is crossed twice:

Until 1980 the ring also represented the city limits of Moscow, this changed after 1980, when municipalities outside the MKAD were incorporated, such as the Zelenograd administrative district .

Today, some residential areas and airport areas far outside the MKAD officially belong to the area of ​​the Russian capital. In the mid-1990s, the MKAD was renovated on the initiative of the Moscow mayor and expanded to five lanes in both directions, the median was provided with concrete boundaries. The MKAD starts at the height of the Entusiastow road. Today the ring road is often overloaded, which is attributed to the dimensioning of the exits and too little space for emergency vehicles.