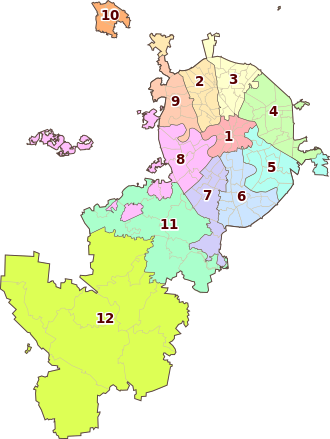 On July 1, 2012, Moscow was expanded to include the two administrative districts of Nowomoskowski and Troitski in a south-westerly direction at the expense of Moscow Oblast, which had previously surrounded it on all sides . The previous ten administrative districts are divided further into Rajons (Russian район ), as local self-governing territories and "municipal districts" (Russian муниципальный округ , munizipalny okrug called), the two newly added counties in each one urban district (Russian городской округ , Gorodskoi okrug ) and "municipalities" (Russian поселение , posselenije ). There are a total of 146 administrative units on the second level (125 Rajons, 2 urban districts, 19 municipalities; as of January 1, 2014).