Coudray's tomb at the historical cemetery in Weimar

View over the market square of Bad Berka 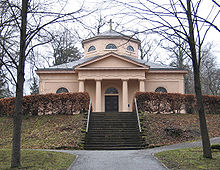 Goethe fountain on the Frauenplan

Lion fighter portal in the park on the Ilm

Clemens Wenceslaus Coudray (* 23. November 1775 in Ehrenbreitstein in Koblenz , † 4. October 1845 in Weimar ) was a German architect of classicism . From 1804 to 1816 he worked as a court architect in Fulda and from 1816 until his death in 1845 as the chief construction director of the Grand Duchy of Saxony-Weimar-Eisenach . He shaped the cityscape of Weimar through numerous buildings.

Clemens Wenzeslaus Coudray was born in 1775 in Ehrenbreitstein near Koblenz , the son of an upholsterer and decorator in the service of Elector Clemens Wenzeslaus von Trier . He is a great-grandson of the sculptor François Coudray (1678–1727) and a grandson of the sculptor Pierre Coudray (1713–1770). The Elector of Trier, after whom he was named, was his godfather and sponsor.

As part of his apprenticeship as an upholsterer and decorator , which he began in 1789 at the age of 14, Coudray learned the basics of practical handling of materials. Between 1795 and 1800 he made his first work as an interior designer in Frankfurt am Main for the artist and businessman Rumpf. In 1796, Coudray first met Christian Friedrich Schuricht , a German representative of classicist architecture in Dresden , which reinforced his desire to study architecture.

Coudray broke off his studies, which began in Berlin in 1799 , after a short time, but continued studying with Jean-Nicolas-Louis Durand (1760–1834) in Paris the following year . He held the chair for architectural theory at the École polytechnique . In the eleventh year after the French Revolution of 1789, primarily the architectural theoretical views of the revolutionary architects were conveyed here, including Durand's teacher Étienne-Louis Boullée . Durand developed his theories further.

Clemens Wenzeslaus Coudray finished his studies and practical work in Durand's private studio in 1804. From 1804 to 1816 Coudray was court architect and professor at the Lyceum in Fulda . At that time he was one of the founders of the Fulda Masonic Lodge La Paix ; he had already been accepted into the Freemasons' league in Paris. He also founded the Fulda Reading Society , whose members used to meet in the Palais Altenstein . After a study trip to Italy , he gave lectures based on Durand's theories and was entrusted with various urban planning activities. In 1810 Coudray married Veronica Schild. During the war of liberation against Napoleon, Coudray was entrusted with various military tasks, including building the fortress in Hanau and commanding a field hospital . In 1808 he founded the Frankfurt Museum Society together with Karl Theodor von Dalberg , Nikolaus Vogt and Johann Friedrich Christian Hess .

On April 20, 1816, Coudray was hired as the Grand Ducal Senior Building Director in Weimar. By working hard, he quickly earned a reputation with Grand Duke Carl August . The newly created Oberbaudirektion , which he chaired, initially only existed on paper, so that Coudray was forced to organize his sphere of activity himself. To this end, he submitted a written plan. During this time, the privy councilor Johann Wolfgang von Goethe became a good friend of Coudray, who supported him with planning difficulties. Coudray's main task was the planning of buildings up to entire streets and squares such as the Berka market square.

The second main task of his work in Weimar was the creation and development of regulations, ordinances and instructions for the building industry . Coudray's work in this area was groundbreaking. A large number of the building regulations currently in force in Germany still contain elements that Coudray developed.

Coudray took part in the first Wartburg Festival in 1817 .

In 1832 Coudray was an eyewitness to the last hours of Johann Wolfgang von Goethe's life . His written notes on this were published in 1889 under the title "Goethe's three last days of life / the handwriting of an eyewitness".

He died on October 4, 1845 in Weimar and was buried there in the historical cemetery with the grave slab designed by himself on the western cemetery wall.

In Weimar, a street in the western city center was later named after him. The asteroid (27712) Coudray bears his name.