Mittelpöllnitz is a municipality in the northeast of the Saale-Orla district in Thuringia . It has about 320 inhabitants on an area of ​​5.01 km².

The municipality of Mittelpöllnitz lies on the northern edge of the Thuringian Slate Mountains . 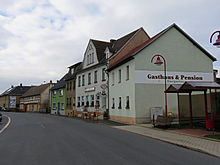 Like the surrounding villages of Nieder- and Oberpöllnitz, Mittelpöllnitz emerged as a Slavic settlement between the 9th and 12th centuries. Mittelpöllnitz is first mentioned in 1238 under the name Polnic . The name Pöllnitz comes from the Slavic word Polnica, which means "river in open terrain" in German and was originally the field name for the area between Triptis and Weida . Via Polniz (1238), Mittelpolnicz (1378) and Mittel-Bellnitz (1568), the current place name Mittelpöllnitz was found in 1611. During this period, the pond mill was probably built as a grinding and cutting mill, because from 1570–1600 this mill belonged to the manor . In 1682 a mill inspection was carried out by an Arnshaugk bailiff. In 1947 the noise of the mill machines in the village ceased.

From 1683, the military and trade routes from Gera to Schleiz-Hof and Gera to Saalfeld were used as post roads by the riding and traveling mail. This means that Mittelpöllnitz also gained importance as a "post office". But the favorable location on the military and trade routes was again fatal in 1806: On October 10, 1806, Napoleon's troops marched into Mittelpöllnitz and looted the farms of the village. Napoleon is said to have stayed in Mittelpöllnitz on his way to Auerstedt.

On February 6, 1945, a shot down American B-17 bomb plane ("Flying Fortress") crashed near Mittelpöllnitz.

Porstendorf was incorporated on July 1, 1950.

Development of the population (December 31st each) :

A corresponding flag is split in red and white and bears the coat of arms. 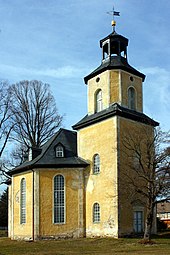 View of the church

The church in Mittelpöllnitz is known in the area because of the 27 meter high church tower and the octagonal floor plan of the nave .

During the GDR era, the residents of the village jointly built the culture center in the center of the village, a school, a kindergarten and a building for the youth club. These facilities are still in use today, with the exception of the school, which had to be closed due to falling student numbers. The "Konsum" building, which was also built during the GDR era, was converted into a fire station in the 1990s.

In the middle of the village there is a large sports field with a soccer field, 60 m lane, beach volleyball field and the like. Facilities that were mainly used by the local elementary school until it was closed. The 60 m lane was converted into a bowling alley in 2008 for the annual bowling tournament.

Cities and municipalities in the Saale-Orla district