The district lies for the most part in the Thuringian Slate Mountains or in its transition areas to the Thuringian Woodland and the Vogtland . As a result, the terrain is clearly characterized by low mountain ranges, over 80% of the area of ​​the district is over 400 m high. The lowest point is the Orlatal with a height of approx. 180 m above sea level. NN in the area of ​​the municipality of Langenorla . The Sieglitzberg near Bad Lobenstein near the border with Bavaria is at 733 m the highest point in the district. The highest place is Rodacherbrunn at an altitude of approx. 700 m.

The Saale river , which gives it its name, cuts deeply into the terrain and flows over a length of approx. 90 kilometers through the district. The second namesake is the Orla , a right tributary of the Saale, which flows through the Orlasenke in the north of the district .

With the Bleilochtalsperre and the Hohenwarte dams, there are two of the largest dams in Thuringia in the district.

In the district there are 15 nature reserves of various types: 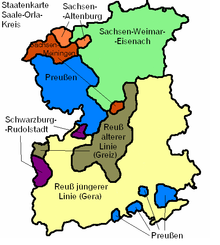 State division of the district before 1922

The district was created as part of the district reform of Thuringia in 1994 by amalgamating the districts of Lobenstein , Pößneck and Schleiz . Historical predecessors include the district of Ziegenrück (until 1952) and the Neustädter Kreis (until 1920).

The 46 seats in the district council have been distributed among the individual parties as follows since the local elections on May 26, 2019 :

Thomas Fügmann (CDU) has been the district administrator of the Saale-Orla district since 2012 .

Since none of the candidates received an absolute majority, there was a runoff election between Frank Roßner and Thomas Fügmann on January 29, 2012, which Fügmann won with 53.1% of the votes against Roßner, who achieved 46.9%, and Roßner thus replaced after twelve years in office as district administrator.

The coat of arms designed by the heraldist Michael Zapfe was approved on January 27, 1995 by the Thuringian State Administration Office.

Blazon : “Above a red shield base with two silver wavy strips split by black and gold; in front a left-turning, red armored, tongued and crowned golden lion; behind a red armored and tongued black lion. "

The black lion is borrowed from the coat of arms of the Margraves of Meissen, which later became part of the Ernestine Wettins. The later dukes or grand dukes of Saxe-Meiningen and Saxe-Weimar-Eisenach came from this line. The black lion was also the heraldic animal of the Counts of Orlamünde, who were once predominant in this region. The golden, red-armored and crowned lion is borrowed from the family coat of arms of the Principality of Reuss. The counts and later princes of Reuss resided in the towns of Lobenstein and Schleiz for a long time, as evidenced by the former castles in the towns. Essentially, the former Schleiz and Lobenstein districts were owned by the Reuss. The two corrugated beams represent the rivers Saale and Orla, which shape today's district and give it its name.

An overview of the coats of arms of the towns and municipalities of the district can be found in the list of coats of arms in the Saale-Orla district .

The oldest and most important railway line Gera - Saalfeld was established by the Thuringian Railway Company in 1871 and touches the cities of Triptis , Neustadt an der Orla and Pößneck .

In 1892, Oppurg station became the starting point for the Orlabahn , a cross-connection between the Saal-Eisenbahn-Gesellschaft and Orlamünde on its main line from Jena to Saalfeld . The line had been in operation from Pößneck lower station since 1889.

Since 1894–1897, the Triptis – Marxgrün railway line , which has been developed by the Prussian State Railway, has run from Triptis across the mountains via Ziegenrück - Lobenstein to Blankenstein and from 1901 on to Marxgrün in Upper Franconia. The Sormitztalbahn from Saalfeld via Wurzbach, which opened in 1907/08, meets them in Unterlemnitz .

The Schleizer Oberland was opened up with the Schönberg – Schleiz railway from the Schönberg station in the Saxon Vogtland district , which was established in 1887 as the state railway of the Principality of Reuss jL and which was not continued until 1930 by Schleizer Kleinbahn AG to Saalburg an der Saale. This new track is including a turnoff to Gräfenwarth been operated electrically -Sperrmauer long time. Passenger traffic has been suspended since 2006.

In 1892 the Royal Saxon State Railways opened the Schönberg – Hirschberg railway from Schönberg via Tanna and Gefell to Hirschberg an der Saale, which is located directly on the Bavarian border.

In the 1990s, the rail network in what is now the district area, which is a maximum of 158 km in length, was shortened to such an extent that less than half of it is used by passenger trains today, namely only 77 km. The following routes have been closed:

There are 15 designated nature reserves in the district (as of January 2017).

See also : List of nature reserves in the Saale-Orla district

→ Main article : List of the upper and middle centers in Thuringia

Bad Lobenstein , Pößneck and Schleiz are designated as medium-sized centers according to the regional plan.

The basic centers are the towns of Gefell / Hirschberg / Tanna (functionally divided), Neustadt an der Orla , Saalburg-Ebersdorf and Triptis .

See also : List of places in the Saale-Orla district

On July 1, 1994, the district was assigned the vehicle differentiation signs LBS (Bad Lobenstein), PN (Pößneck) and SCZ (Schleiz). On February 1, 1995, these were replaced by the new distinctive symbol SOK .

Since November 24, 2012 the abbreviations LBS , PN and SCZ are available again.