The title of this article is ambiguous. Further meanings are listed under Frankenwald (disambiguation) .
dep1
p5

The area from the south-western edge of the Saalisch Slate Mountains to the ridge heights is called the Franconian Forest, taking into account morphographic values . This means in particular that the Franconian Forest to the northeast only extends just beyond the Main-Saale watershed and drains almost exclusively to the Main.

The mountains of the Franconian Forest include - sorted by height in meters (m) above mean sea level (NHN): 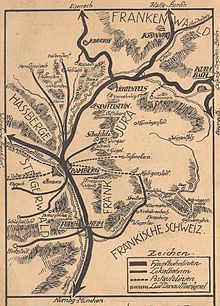 Traffic map from 1912 with the western Franconian Forest (top right)

The following sentence describes the character of the Franconian Forest - only contradicting at first glance: "In the Franconian Forest there are no mountains - there are valleys". A large number of narrow, sometimes parallel V-valleys between Werra , Itz and Steinach in the northwest and the source branches of the White Main in the southeast intervene in the plateau and create a low mountain range.

On the western edge of the Franconian Forest, between Gundelsdorf in the south and Rothenkirchen in the north, there is the three-part Stockheim Basin, one of the few Rotliegend basins in Bavaria. In it are u. a. acidic volcanic rocks , volcanogenic and lacustrine sediments of the Permian (mainly slate , sandstones and various conglomerates ) as well as some thin coal seams that were mined underground near Stockheim and Neuhaus-Schierschnitz until the 1960s.

The slate mentioned above designed the houses - the “blue gold” is still used today for roofing - and characterizes the Franconian forest villages.

Many places like Schwarzenbach am Wald or Bad Steben are state-approved climatic health resorts due to their altitude and the stimulating climate and thus contribute a large part to the income of the population.

The Franconian Forests are closely connected to their forest. It was the basis for their livelihood in the glass and porcelain industry , rafting , charcoal burning and the numerous cutting mills . The raftsmen brought Franconian firs on the Main and Rhine as far as Amsterdam . The rafting on the Wilder Rodach near Wallenfels is still a tourist business today .

The settlement of the Franconian Forest, the former Nortwald, began in the 13th century, initially on the wooded plateaus. The first settlements with the still recognizable settlement forms Waldhufen - and Rundangerdorf emerged in clearing islands . A prime example of a well-preserved Rundanger village is the village of Effelter in the Kronach district, which is now part of Wilhelmsthal . The valleys were not settled until later and the typical meadow valleys emerged.

That is why the Franconian Forest is characterized by three landscape elements:

In the east, in the area around Naila and Schwarzenbach am Wald, there is a rather gently undulating high plateau landscape. In the west, on the other hand, in the district of Kronach , narrow meadow valleys alternate with wooded slopes and cleared plateaus. 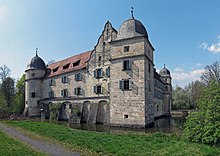 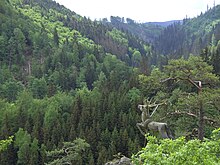 View over the Höllental from the Hirschsprung

The regional center, Hof (Saale) , is already a few kilometers outside the Franconian Forest.

The following communities are located in the Franconian Forest or on its borders. The list is sorted alphabetically.

The Franconian Forest lies between the Main in the southwest and the (Saxon) Saale in the northeast. The Rodach with its tributaries Haßlach and Kronach as well as the Schorgast with the Untere Steinach flow towards the Main , whereby the two latter rivers originate from the Münchberg plateau and only the Untere Steinach crosses the Franconian Forest, while its receiving water west of Wirsberg forms the southern border.

The Franconian Forest Nature Park is made up of parts of the Kronach district and the neighboring districts of Hof and Kulmbach . The Ködeltalsperre , the largest drinking water reservoir in Bavaria, is located in the nature park. With a capacity of 21 million cubic meters, it supplies almost the entire Upper Franconian population with raw water .

The Frankenwaldverein is a local and hiking association. He maintains customs and history in the Franconian Forest and maintains a dense network of hiking trails. The association was founded in Naila and uses technologies such as GPS for hiking.