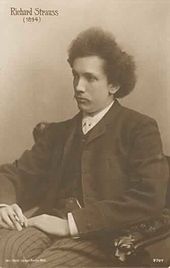 It was premiered on November 27, 1896 by the Frankfurter Städtische Orchester under the direction of the composer as part of the museum concerts in Frankfurt am Main .

In 1895 Richard Strauss took a liking to Nietzsche's criticism of culture on German “ philistinism ”. He was also avowedly averse to Christianity. Perhaps the language of Nietzsche immediately challenged Strauss musically. Nietzsche himself said, sensibly: “Under which category does this 'Zarathustra' actually belong? I almost believe it is among the 'symphonies'. ”Whether Strauss thought Nietzsche from the start when he worked is not certain; Hints in the sketches show that Goethe's Faust , especially Faust's monologue at the beginning, and the evocation of the earth spirit, were also in mind during the composition .

It is noteworthy that the four parts of Nietzsche's Zarathustra correspond to the movements of a symphony . Nietzsche conceived the font as a Dionysian dithyrambus , a hymn with a great musicality. So it is not surprising that Gustav Mahler was interested in the text at the same time as Strauss .

A normal performance lasts about half an hour. The piece is divided into nine parts, which, however, are only separated by pauses in three places. Strauss named the parts after chapters from the book:

At the beginning of the first part is Zarathustra's “preface” with the famous crescendo based on the “nature motif” (c'-g'-c '') - with the tone gender initially changing between major and minor. This motif runs through the entire first part, which, after the loud recurrence of this very "nature motif" in the convalescent, ends in a general pause . The musical structure shortly before the general break corresponds to Zarathustra's collapse from weariness with people. Zarathustra's convalescence in the second part of the composition is shaped entirely by the “dance song”, which, oscillating for a long time between B major and C major, finally ends in a transfigured B major. But at the very end, in the lower strings against B major, the nature motif CGc sounds again in the highest register: the eternal return of the same?

The tone poem begins with Zarathustra's decision to go down to the people before sunrise. The tremolo of the low strings forms the background to the sunrise represented by the "nature motif" c'-g'-c ". Driven by bangs , after a few sforzati and cadences, the C major climax is reached, to which Strauss adds the organ , which gives the whole thing a religious note.

The contrasting program follows in “From the Hinterweltlern”, who believe in an imperfect God and are caught in their world between good and evil. Strauss creates a religious atmosphere through a cantable A flat major theme performed “with devotion” by multiple strings . “Credo in unum deum”, play the horns and the organ, with irony. In “Von der great Sehnsucht” the longing motif , which rises in broken triads , fights against the devout motifs of the previous part. Longing prevails and is only tamed by the recurring “nature motif”. In Of Joys and Passions, a major theme in C minor, these feelings are given free rein. The “joy motif” can be recognized by the decimal jump followed by a chromatically falling melody. Towards the end, however, doubts appear in the trumpet's disgust motif . This leads to the “grave song” in which the oboe strikes a plaintive melody. Motifs from the previous parts can be heard, especially in the solo violin, as if reminiscent of a better time. A tone leads over to "From Science". In this part, Strauss takes on petty academicism with a dry fugue .

“The convalescent” is the center of the work. In the first part, the music is heading towards Zarathustra's collapse: at the end of a dramatic increase, the brass section blares the “nature motif” over a triple forte CG chord of the entire orchestra. General break. Zarathustra slowly gets up again, the second part of the work begins. Compared to the first part, it is designed more uniformly. Zarathustra's recovery takes its course: a lively waltz in C major, whose dithyrambic jubilation also includes the themes of the first part, leads to the “dance song”: the starting point for a longer development and recapitulation. After two large waves of increase, the momentum from “Nachtwandlerlied” sounds, which begins with the first stroke of the bell of a total of twelve midnight strikes. The music seems to be fulfilled in B major, the key of great longing. But the work ends in a conflict between C major and B major, between nature and spirit. While the violins and the high woodwinds with B major chords try to bring the work to a peaceful conclusion, the “nature motif” in C major, played by cellos and basses in pizzicato , prevents them from doing so .

There is no longer any good or bad. The arc to the beginning of the piece has been struck. Does that promise the next morning, the “eternal return of the same?” In any case, the formal unity works like a narcotic against the contradictions of the world, over which Nietzsche despaired.

The introductory bars of the piece became world famous through Stanley Kubrick's 2001 film : A Space Odyssey . A recording with the Vienna Philharmonic under Herbert von Karajan was used for the film . On the record published as a soundtrack, however, Karajan's recording was replaced by a recording by Karl Böhm with the Berliner Philharmoniker .

Many other films refer to this film and the piece of music, mostly in a comedic manner:

The Brazilian musician Eumir Deodato arranged a funky interpretation of the introduction to his album Prelude , the single version of which also hit the charts in 1972 . A cover version of the arrangement was released in 2001 by the Mardi Gras Brass Band with Deodato as a guest musician.

Elvis Presley used it as a triumphant introduction to each of his concerts in his later career from 1971 until his last concert in June 1977.

Perplexer used the beginning of the piece in 1994 as the motif of his single "Da Capo", which climbed into the top ten of the German charts.

The American progressive metal band Dream Theater played the opening bars as the opening theme of their 2007 “Chaos in Motion” tour.

It was used as an intro by the US Nu-Metal band Limp Bizkit on the Unicorns N 'Rainbows Tour (2009).

It was used as the opening theme / intro in previous concerts by US nu-metal band Mudvayne .

The German brass ensemble Blechschaden arranged the theme in the piece "Also Brass Zarathustra", which appeared on the album of the same name (2009).

The techno music project Members of Mayday used the opening motif in the hymn Made in Germany for the techno event Mayday in 2012 .

The doctors use an alienated version as the intro of their 2019 festival concerts.

Various planetariums accompany the start-up of the star projector with the starting theme of the piece.

It also serves as background music for the fireworks at the end of every performance of the Störtebeker Festival in Ralswiek on Rügen .

The American wrestler Ric Flair uses it as a draft anthem.

The opening theme was voiced in the 1970s a few minutes before the kick-off for the home games of the Borussia Mönchengladbach football team in the old Bökelberg Stadium.

In the PC game Heroes of Might and Magic II , released in 1996, the piece is used as background music; The introduction of the musical work can also be heard at certain points in many other video games. For example, in the evolution simulation Spore, when your own species discovers fire.

The piece is also used in the commercials for the Warsteiner beer brand .