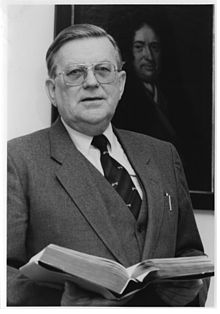 Günter Scheel (born February 9, 1924 in Rathenow ; † September 26, 2011 in Tutzing ) was a German historian and archivist . From 1979 to 1989 he was director of the Lower Saxony State Archives in Wolfenbüttel . His research activities focused on the life and work of the universal scholar Gottfried Wilhelm Leibniz as well as the Hanoverian and Braunschweig regional history.

Scheel grew up in Rathenow, where he graduated from secondary school. At the age of 15 he switched to the teacher training seminar in Zühlsdorf (Pomerania), where he passed the Abitur. At the age of 17 he was committed to the Reich Labor Service . Working in the swamps at Lake Peipus made him so sick that he was classified as unfit for military service. He worked for a short time as a teacher at a primary school in Cottbus and began studying history, German and philosophy at the Humboldt University in Berlin in 1943 . His academic teachers included the historian and former Lübeck archivist Fritz Rörig , as well as the historians Friedrich Meinecke , Fritz Hartung and Friedrich Baethgen . From 1950 to 1952 he was a research assistant at Fritz Rörig. Scheel received his doctorate in 1952 from the constitutional historian Fritz Hartung. He had been working at the Berlin Academy of Sciences since 1952 , where he was in charge of the critical edition of Gottfried Wilhelm Leibniz's writings and letters under the direction of Kurt Müller. Volume 6 of General, Political and Historical Correspondence was published in 1957.

Activity at the main state archive in Hanover

In 1961 Scheel moved to the Lower Saxony Archive Administration of Hanover, headed by Rudolf Grieser . He completed his training for the higher archive service with stations in Osnabrück, Hanover and Marburg. He passed his exams at the archive school in Marburg in March 1964 and then worked as an archivist in the main state archive in Hanover . There he was most recently department director. He worked on regional history topics and continued the Leibniz research he had begun in Berlin. Between 1964 and 1979, volumes 7 to 10 of the Leibniz correspondence edited by Scheel were published.

Head of the Wolfenbüttel State Archives

In 1979 Scheel became director of the Lower Saxony State Archives in Wolfenbüttel, succeeding Joseph König . During his ten-year directorate, an extension was built to the administration wing in 1988, giving the restoration workshop and the moving IT system new space. His publications from this time are mainly devoted to Leibniz research. Further areas of work were the Hanoverian and increasingly the Braunschweig regional history. His successor as archive director was the historian Horst-Rüdiger Jarck in 1989 .