Tutzing seen from the lake

View from Tutzing Castle over the lake to the Karwendel Mountains

Tutzing is a municipality in the Upper Bavarian district of Starnberg .

Tutzing is on the west bank of Lake Starnberg .

The municipality has 11 officially named districts (the type of settlement is given in brackets ):

Burial mounds from the Bronze and Iron Ages prove that the area around Tutzing was already settled in prehistoric times. Remains of an estate on Deixlfurter See give evidence of the presence of Romans . The place was first mentioned in a document in 742 when it was donated to the Benediktbeuern monastery . The name Tutzing comes from the Tozzi and Tuzzo family from the Huosi family . This suggests that the place existed as early as the 6th century. After the Tuzzinger family died out, the Munich patrician family of the Dichtl acquired the place around 1480. In 1519, Bernhard the Elder Dichtl was awarded court justice over Tutzing by the Duke of Bavaria. As a Tutzing lord of the castle, he was allowed to raise taxes from his subjects and exercise lower jurisdiction . The place was a simple fishing village until the 19th century, in which from the 16th century there were repeated disputes over fishing rights between the fishermen and the rule of the Hofmark Tutzing.

During the Thirty Years' War the Hofmark Tutzing was badly hit by Swedish and Imperial Spanish troops. Between 1632 and 1634 the castle, parish church, brewery, farm tavern and some properties burned down. No sooner had the population recovered from the horror of the war than the first cases of plague appeared. The disease raged throughout the Hofmark.

In 1866 the Munich - Starnberg railway was extended to Tutzing.

Tutzing Castle , view from the lake to the main building

In 1650, the Hofmark was bought by Hans Albrecht Viehbeck von und zu Haimbhausen. His daughter married the imperial baron Maximilian Ernst von Götzengrien. He had a castle with a baroque facade built on the lake shore . The park was laid out in the French style and equipped with fountains and vases.

From 1731 to 1869 Tutzing belonged to the Viereggs , a family of counts from Mecklenburg. In particular, Count Friedrich von Vieregg (1750–1843) owes the Tutzing Palace a generous redesign that took place between 1802 and 1816. In the 19th century the park was also converted into an English landscape garden . After the construction of the railway, the castle passed through several hands. It was first owned by the Stuttgart publisher Eduard Hallberger , then his daughter Helene Henriette Landberg († 1915), who bequeathed it to the city of Stuttgart. The owner from 1921 to 1930, Marcell Nemes , an important Hungarian art dealer of Jewish origin, ennobled as a nobleman by Jánoshalma , renovated the castle and furnished it with works of art. Marcell von Nemes was also a generous patron of Tutzing. His riding arena was donated to the Tutzing sports club (now the gym), the magnificent neo-baroque high altar in the church of St. Josef was donated and the Johannishügel was opened to the public by Baron von Nemes.

From 1936 to 1940, the Industrial and member of parliament was the center Albert Hackelsberger castle owner. In September 1938 he was picked up by the Gestapo at the castle and placed in solitary confinement. Hackelsberger did not live to see the trial before the People's Court in 1940 - he died while in prison. He was charged with high treason and “foreign exchange offenses” - at that time common charges against unpleasant men of the Catholic Church, which in quite a few cases led to death sentences. His wife, née Weck, ("Weck-Glasses") sold the castle to Ida Kaselowsky, heiress of the Oetker company in Bielefeld , in 1940 .

From 1947 to 1949 the Protestant regional church was tenant of Rudolf August Oetker , the next heir to the company. In spring 1949 she acquired Tutzing Castle with two thirds of the property for 350,000 marks. The Evangelical Academy Tutzing quickly developed from its educational activities at this location, and at its conferences the young Federal Republic received politically significant impulses. The palace and park are Tutzing's most important architectural ensemble in terms of cultural history.

See the current holdings of the palace and park: → Academy building and park

On January 1, 1978, larger areas of the dissolved Traubing municipality were incorporated.

Marlene Greinwald (FW) has been mayor since 2018. Her predecessor was Rudolf Krug (ödp) until his death on August 17, 2017. In a runoff election on March 30, 2014, he was elected to succeed Stephan Wanner (non-party, supported by the SPD). Its predecessor, in turn, was Peter Lederer (CSU).

Town hall of the municipality of Tutzing

The French partner municipality is the spa town of Bagnères-de-Bigorre ( Hautes-Pyrénées ) in the Pyrenees.

The Hungarian twin town is Balatonkenese .

Tutzing's oldest building, the listed Vetterlhaus, was built in the 17th century as a shepherd's house. It has a bricked ground floor, the upper floor was built in a block construction. In 1901 the Vetterl family of six moved in. After the First World War, the community made the house available to the financially weak. The former “Hütlhaus” is one of the last remaining remains of the old village of Tutzing and gives a good impression of the construction of the simple farms and fishermen's properties. It illustrates the change from a modest, small-scale village to a villa town and a tourist community in later years. Today the Vetterlhaus houses the guest and information office of the Tutzinger Förderverein für Tourismus. 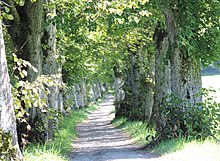 Many avenues can be found in Tutzing

According to official statistics, there were 32 in agriculture and forestry in 1998, 941 in manufacturing and 245 in trade and transport at the place of work. In other economic sectors 1050 people were employed at the place of work subject to social security contributions. There were a total of 2,682 employees at the place of residence subject to social security contributions. There were six companies in the manufacturing sector and nine in the construction sector. In addition, in 1999 there were 43 farms with an agriculturally used area of ​​1086 hectares, of which 151 hectares were arable land and 925 hectares were permanent green areas.

The station Tutzing is located on the Munich-Garmisch-Partenkirchen railway and is connected to the S-Bahn network of MVV , the regional transport train in the direction of Munich and Innsbruck , and on Fridays, Saturdays and Sundays at ICE trains to Innsbruck , Garmisch -Partenkirchen , Berlin , Hamburg and Dortmund . This makes Tutzing the fifth smallest municipality in Germany with an ICE connection. At the same time, the Kochelseebahn branches off here . In the summer months, Tutzing is approached by the Bayerische Seenschifffahrt . The total road network is 66.8 km.