Herrsching am Ammersee (officially: Herrsching a.Ammersee ) is a municipality in the Upper Bavarian district of Starnberg .

The municipality has 10 officially named districts (the type of settlement is given in brackets ): 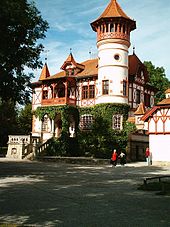 The geological formation of the Fünfseenland originated in the last ice age, the so-called Würme Ice Age, which ended an estimated 10,000 years ago. In the direction of flow of the glaciers, the high lateral moraines were created, such as the Andechser ridges and the underground excavations for the later lakes. The water level of the Ammersee was around 30 m higher than at present, so the lake reached from Grafrath in the north to Weilheim. The silting up and the digging of the Amper not only lowered the water level, but also separated the Wörthsee and Pilsensee lakes.

The first traces of a settlement date from the Bronze Age (up to 1200 BC), ceramics and shards were found below Widdersberg and east of the current archaeological park in Herrsching. The typical burial mounds from the Hallstatt period were leveled at the beginning and middle of the 20th century. Traces from Roman times (15 BC to 400 AD): The foundations of a Roman drying oven, a stone house and several coins were found in Herrsching. A Roman tombstone from the second half of the 2nd century AD is protected in the outer wall of the Church of St. Michael in Widdersberg. Individual Roman traces, i.e. coins or shards, were also found in various parts of the current municipal area.

From the early Middle Ages (400–788 AD), only graves were found in Herrsching and Breitbrunn, before a tuff chamber grave with human skeletal remains was uncovered during expansion work on the communal cemetery. Further investigations by the State Office for Monument Preservation revealed that it was an early medieval aristocratic grave from the Merovingian era and the almost completely preserved foundation of an early Christian church from the 7th century. The site was opened in 1996 in the form of an archaeological park with aristocratic graves, a reconstructed church and replicas.

In 776 Herrsching was first documented when the noble Huosier family donated it to Schlehdorf Monastery . In 1098, "Preitbrunnen" (Breitbrunn) was first mentioned in a document. In the middle of the 16th century, Duke Albrecht V built a castle in what is now the Mühlfeld district .

Herrsching remained a fishing and farming village until the 19th century, when it began to develop into an excursion and holiday destination.

In 1903 Herrsching received a rail connection to Munich. Today tourist day trips and longer stays are an essential source of income. In 1889 the painter Ludwig Scheuermann built a castle in the Wilhelminian style on the lake shore, where he celebrated artists' parties with friends in the summer. The Scheuermann-Schlösschen became the property of the municipality in 1934. After it served as a refugee accommodation in the post-war period, it was renovated and today, under the name Kurparkschlößchen, it serves as a cultural center for concerts and exhibitions as well as a wedding palace.

In the district of Wartaweil, the Villa Bräustedt property was transferred to the NSDAP Reich Treasurer Franz Xaver Schwarz and later to the Herrschingen Finance School due to "tax debts" during the National Socialist era . At that time it was used as a “rest home for working people” and as a rest home for the NSV . After the Second World War it was used as accommodation for refugees, pregnant women and as a maternity, baby and children's home. The founders were Luise Silverberg and Gertrud Thyssen . Their business was financed by domestic pregnant women and employees as well as welfare (daily allowance). No “ anti-social elements” should be included there. Many children were born there and put up for adoption. Gertrud Thyssen "knew the Americans' preference for babies", as reported in the Sonntagspost by Süddeutscher Verlag in 1957. Since Starnberg wanted to end the rental for the home, negotiations in the Bavarian state parliament that the Wartaweil children's and infant home would be run for a short time by the Brotherhood Salem eV. In 1966 it was used by the state of Bavaria as an extension of the state finance school.

An integration meeting (Herrschinger Welcome Day) is held annually by the community to better integrate newcomers.

On January 1, 1972, due to the regional reform in Bavaria, the previously independent municipality of Widdersberg and on January 1, 1978 the municipality of Breitbrunn am Ammersee were incorporated. Since the incorporation of Breitbrunn, Herrsching has had two street names, Seestrasse and Kapellenstrasse, twice, which leads to problems with mail delivery and emergency medical calls.

Town hall of the municipality of Herrsching

The first mayor of the community is Christian Schiller (non-party). He was elected to office in 2008 as the successor to Christine Hollacher (Free Voters). In the local election on March 15, 2020, Schiller was re-elected with 61.17% of the vote.

Description : “Divided by a silver-colored wave bar; above in blue a flying silver seagull, below the Bavarian diamonds ”.

Sunset over the Herrsching Ammerseeufer

Herrsching is 15 km south of the Inning am Ammersee motorway exit on the A 96 from Lindau to Munich.

On July 1, 1903, the Royal Bavarian State Railways opened the Pasing – Herrsching local line with the Herrsching station . Herrsching has been connected to the Munich S-Bahn network since 1972 ; the S 8 line runs from Herrsching via Munich to Munich Airport . Various buses run from the train station, including a. to Andechs Monastery and Weilheim .

The ships of the Bayerische Seenschifffahrt dock in Herrsching . The ships operate from the end of March to mid-October and connect the northern, southern and western shore locations. Are started z. B. Stegen to the north, Utting to the north-west, the Breitbrunn district to the north and Dießen to the south-west . Herrsching is also the namesake for the paddle steamer "Herrsching", which is 54 m long and has a capacity of around 400 passengers and is the largest ship on the Ammersee. The ship was put into service in 2002 and replaced the motor ship of the same name, which was christened in 1956 and offered space for around 240 passengers. Other current ships on the Ammersee are the paddle steamer “ Diessen ” and the motor ships “Augsburg” and “Utting”.

The longest lakeside promenade in Germany runs along the Ammersee from Herrsching, on which you can stroll around ten kilometers ; the many hiking and cycling paths (e.g. to Wessobrunn ) or to Lake Starnberg are recommended for more sporty guests .

On the Ammersee there is some surfing and sailing, there are numerous swimming opportunities and a boat rental.

All senior civil servants in the Bavarian financial administration are completing their training in the finance department at the University of Applied Sciences in Bavaria, Herrsching, which is housed in an imposing building from the 1930s.

Another educational institution is the House of Bavarian Agriculture in Herrsching . Originating from the former farmer's school of the Bavarian Farmers' Association (the oldest rural folk high school in southern Germany founded on November 30, 1948 ), it is now an open conference center for people from rural areas for personal and professional further education. It also houses the valuable agricultural history library in Herrsching with over 20,000 volumes.

Until the move to Garching in 1966, Herrsching was home to the branch office of the Commission for Low Temperature Research of the Bavarian Academy of Sciences, which was founded by Walther Meißner in 1946 and where Robert Doll and Martin Näbauer discovered river quantization in 1961 .

Districts of Herrsching am Ammersee