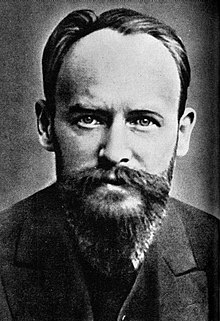 Christian Otto Josef Wolfgang Morgenstern (born May 6, 1871 in Munich ; † March 31, 1914 in Untermais , Tyrol , Austria-Hungary ) was a German poet , writer and translator . His comic poetry achieved particular fame, but it only constitutes part of his work.

In 1881 his mother Charlotte died of tuberculosis . Morgenstern had obviously been infected with her. Soon afterwards, without having received regular school lessons in early childhood, he was entrusted to his godfather Arnold Otto Meyer, an art dealer in Hamburg , for upbringing, but he suffered as a result. A year later he returned to Munich and went to a boarding school in Landshut . There was corporal punishment used, and he learned bullying by his classmates.

Christian Morgenstern at the age of 18

The father married Amélie von Dall'Armi and was appointed to the Royal Art School in Wroclaw in 1883 . Christian went to Breslau and attended the Maria Magdalenen grammar school . Here, at the age of 16, he wrote the tragedy Alexander of Bulgaria and Mineralogia popularis , a description of minerals . Both texts have not been preserved. He also designed a Faust poem and studied Arthur Schopenhauer . At the age of 18 he met Friedrich Kayssler and Fritz Beblo at the Magdalenen-Gymnasium . Lifelong friendships developed from this.

From the autumn of 1889 on, Morgenstern attended a military preparatory school because his father wanted him to be an officer. After six months, Morgenstern left the school and from then on attended a grammar school in Sorau . Here began a friendship with Marie Goettling, who later emigrated to America. He corresponded with her while he was still studying economics in Wroclaw. Here Felix Dahn and Werner Sombart were among his most important lecturers. Morgenstern founded the magazine Deutscher Geist with friends under the motto “He who doesn't know where he's going”, a quote attributed to Oliver Cromwell , often gets the furthest .

In 1893 he wrote Sansara , a humorous study. He spent the first summer semester with Kayssler in Munich. However, because of his tuberculosis, he could not stand the climate there and went to Bad Reinerz for a cure . When he returned to Breslau, the father had separated from his second wife. A recovery period in Sorau followed. Since he could not continue his studies, friends would have been willing to pay for a spa stay in Davos . However, the father rejected this, as did an offer by Dahn to finance the studies up to the trainee lawyer. Morgenstern now decided to live as a writer. After the third marriage of his father, the relationship with him largely broke up. 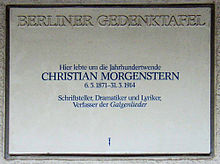 In April 1894, Morgenstern moved to Berlin , where, with the help of his father, who was partly seeking reconciliation, he found a job at the National Gallery . He dealt with Friedrich Nietzsche and Paul de Lagarde and worked for the magazines Daily Rundschau and Freie Bühne , he wrote articles for the magazines Der Kunstwart and Der Viewer .

In the spring of 1895 Morgenstern's first book was published, the cycle of poems In Phanta's Castle . He sailed on the Müggelsee and toured Helgoland , Sylt and Salzburg in 1895 and 1896 . In the summer of 1897 he was commissioned to translate (from the French translation) the autobiographical notes Inferno by August Strindberg . In October 1897, Morgenstern signed a contract with S. Fischer Verlag concerning the translation of Henrik Ibsen's works , even though he did not yet speak Norwegian . Das Fest auf Solhaug should have been translated as early as February 1898 . Morgenstern traveled to Norway from May 1898 to autumn 1899 , mainly to learn the language, where he also met Ibsen several times.

In 1900 a cure followed in Davos, then Morgenstern traveled to Lake Lucerne , Zurich , Arosa , Milan , Rapallo , Portofino , Florence , Wolfenschiessen and Heidelberg . In December 1902 he visited Rome and returned to Berlin in May 1903. During this time he translated Knut Hamsun and Bjørnstjerne Bjørnson .

From 1903 he was literary editor in the publishing house of Bruno Cassirer , with whom he was on friendly terms. There he supervised and promoted a. a. Robert Walser . Before that he was dramaturge at Felix Bloch Erben . In 1905 he traveled to Wyk and stayed in a sanatorium in Birkenwerder , which did not lead to the desired success. In addition, his gallows songs appeared that year and he read Fyodor Mikhailovich Dostoyevsky . A year later, for health reasons, he traveled to health resorts in the Bavarian , Tyrolean and Swiss Alpine landscapes, to Bad Tölz , Längenfeld , Obergurgl , Meran , Obermais , St. Vigil and Tenigerbad, and dealt with Jakob Böhme , Fechner , Fichte , Hegel , Eckhart von Hochheim , Fritz Mauthner , Spinoza and Tolstoy .

In July 1908, Morgenstern met Margareta Gosebruch von Liechtenstern in Bad Dreikirchen . After her departure he stayed in lively correspondence with her. When Margareta fell ill in October, Morgenstern went to see her in Freiburg im Breisgau . But since the stay of a fiancé with a sick woman was contrary to social morals, he avoided Strasbourg . In November he went to Berlin like the recovered Margareta.

In January 1909 he made a close and lasting friendship with Rudolf Steiner at lectures in Berlin . In the same year he traveled to Düsseldorf , Koblenz , Kristiania , Kassel and Munich to hear Steiner's lectures . In May, one month after Margareta, he joined the German section of the Theosophical Society led by Steiner . When this corporation was split up in 1912/1913, he remained on Steiner's side and became a member of the Anthroposophical Society . In 1909 he also translated Knut Hamsun, attended the International Theosophical Congress in Budapest and his father in Wolfshau, and traveled with Margareta to the Black Forest and Obermais. There he fell ill with severe bronchitis , probably as a result of numerous trips . A doctor already indicated the imminent death. Morgenstern's condition improved, however, and so he and Margareta married on March 7, 1910.

From May to August he stayed in Bad Dürrenstein in the Dolomites until he went to Bern for a lecture by Steiner . Morgenstern's wife only attended lectures in Basel , about which she reported to him afterwards. After a stay in Munich, he traveled in October via Verona , Milan and Genoa to Palermo and finally to Taormina . In the same year he began working with the publisher Reinhard Piper , which lasted until the end of his life. Christian Morgenstern had previously worked with four other publishers, namely Richard Taendler , Schuster & Loeffler , Samuel Fischer and Bruno Cassirer . However, a permanent business relationship was not established.

Morgenstern actually wanted to spend six months in Taormina with Margareta; But since he became seriously ill again, as soon as he was able to do so in the spring of 1911, he went to the German Hospital in Rome and then to the Arosa Forest Sanatorium , where he saw his father and Margareta's mother, who initially disagreed with the marriage was. After several months of rest cure, he was able to leave the sanatorium and moved into an apartment in Arosa with Margareta.

In 1912 he received a donation of one thousand marks from the German Schiller Foundation. Soon afterwards he went to Davos. Margareta attended Steiner's lectures in Munich for him. Still ill, he left the sanatorium and went to Zurich with Margareta, where he met Steiner in October. Then he returned to Arosa. He wrote a letter in which he wanted to suggest Rudolf Steiner for the Nobel Peace Prize , but did not send it off.

From the spring of 1913 he stayed in Portorose , where he translated the poems of Frederick the Great from French and made Michael Bauer , who also had lung disease, a friend. After a trip to Bad Reichenhall , where he met Friedrich and Helene Kayßler, he heard Steiner's lectures in Munich, which he followed to Stuttgart in November and to Leipzig in December. In both Stuttgart and Leipzig, Marie von Sivers , who later became Steiner's wife, recited Morgenstern's works, who considered the last of the two lectures on New Year's Eve to be the greatest day of his life.

In Munich, the Morgensterns could not reach their doctor and therefore went to a sanatorium in Arco (Trentino), which Morgenstern did not accept in order to avoid dying patients. After a short stay in a sanatorium near Bolzano , he moved to the Villa Helioburg in Untermais ( incorporated into Merano since 1924 ), where he was still working on the printed sheet for the collection We found a path . He had written to Michael Bauer: "Now I'm lying down again and can't get up ... we want to go to Hartungen in Meran." Bauer drove to Meran to Morgenstern, who on March 31, 1914, around five in the morning, was looked after by his Doctor Christoph Hartung von Hartungen died in the Villa Helioburg. On April 4, he was cremated in Basel. Rudolf Steiner kept the urn until it was placed in the new Goetheanum . The urn has been buried on the Goetheanum site since 1992.

Part of Morgenstern's estate is in the German Literature Archive in Marbach . Parts of it can be seen in the permanent exhibition in the Museum of Modern Literature in Marbach, especially the originals of the gallows songs .

After the poet's death, his widow published many of his works, some of which she rearranged and added previously unpublished parts of the estate (only about half of his work had been published during Morgenstern's lifetime). His so-called serious poetry never found the resonance that Morgenstern had always hoped for and was largely ignored by research. Morgenstern only became known (and popular) to a larger readership with his humorous poetry. Morgenstern unfolds his amiable, astute linguistic wit, especially in his gallows songs , the decoding of meaning often requires “a second and third glance”. Morgenstern's humoresques, which are often misunderstood as literary nonsense in research, are by no means mere gimmicks, but, in the words of the poet, “toys and serious things”. Three examples of Christian Morgenstern's special comedy language:

The end of the poem The Impossible Fact (from Palmström ) became a popular phrase :

And he comes to the conclusion:
The experience was only a dream.
Because, he concludes with razor sharpness
, what cannot be cannot be.

His Nasobēm inspired the zoologist Gerolf Steiner to create the (fictional) order of the Rhinogradentia , a scientific-satirical joke that spread internationally and later found its best-known imitation in Loriot's stone louse .

On December 8, 1998 the asteroid (9764) Morgenstern was named after Christian Morgenstern.

On the 100th anniversary of the poet's death in March 2014, the Christian Morgenstern Literature Museum opened on the so-called Galgenberg in Werder (Havel) near Potsdam , where the gallows songs are said to have originated. Also on the 100th anniversary of his death, the Munich German scholars Markus May and Waldemar Fromm presented newer results of the Morgenstern research on October 25, 2014 in the Lyrik Kabinett in Munich, in particular about Morgenstern's precursor role for the great humorists of the 20th century such as Robert Gernhardt and Ernst Jandl . As far as their “bureaucracy criticism” is concerned, according to Fromm, Franz Kafka and Morgenstern are brothers in spirit: “Morgenstern is already building pre-Kafkaesque worlds to show the absurdity of a managed life.” An example:

Korf authority receives
an armored form from the police office stating
who he is and how and where.

What place he was up to now,
what status and
wherever he was born, day and year.

Whether he is allowed
to live here at all and for what purpose,
how much money he has and what he believes.

Conversely, if you were to
seduce him into arrest on the spot , and
underneath it says: Borowsky, Heck.

Korf replies briefly and roundly :
“According
to personal findings, a high-level management presents and

and draws,
albeit regrettably,
Korf. (To the district authority in -.) “The

boss concerned reads it in amazement.

Editions edited, expanded or modified from the estate

Transfers in other languages

Stuttgart edition of the Urachhaus publishing house , Stuttgart, ed. under the direction of Reinhardt Habel.

Morgenstern's poems have been set to music by many composers. Detailed overviews can be found in the Digital Christian Morgenstern Archive and in the Lied, Art Song, and Choral Texts Archive . Some examples: