Damage to the stone louse

The stone louse ( Petrophaga lorioti ; literal translation from ancient Greek or Latin: Loriot's stone eater) is a fictional rodent drawn by Loriot , which Loriot found on October 18, 1976 in his sketch The stone louse (Prof. Grzimek) as part of the second episode of TV show Loriot presented. Loriot himself appears in a parody by the zoologist and television presenter Bernhard Grzimek .

The stone louse at Loriot

In a parody of the series Ein Platz für Tiere , broadcast on ARD in 1976 , Loriot - in the role of Bernhard Grzimek - describes the stone louse as a shy rodent that feeds on silicates , i.e. stones. Occasionally an iron girder would not be scorned. The sexually mature male has a daily requirement of around 28 kilograms of concrete and bricks, while the female consumes almost double that amount during pregnancy. The "cute little guy" is threatened with extinction, but during scientific excavations in the ground, individual animals have been found at a depth of more than 20 meters and taken to zoological gardens. At the beginning of the skit, Loriot informs the audience that he has brought a stone louse with him, which is based on Grzimek's television show, which usually presented an animal he had brought with him when he began his moderation. Loriot had a few stones in front of him on the table, of which after a few minutes only a few fragments are left after a movie - in which collapsing buildings, including skyscrapers and even a church, allegedly caused by stone lice, are shown The stone louse that I brought with me has now "satisfied her worst hunger".

In addition to the original television sketch, the stone louse is also mentioned in Loriot's printed publications.

The stone louse in the Pschyrembel

In 1983 the renowned medical dictionary Pschyrembel from the Berlin science publisher Walter de Gruyter , a standard reference work in his field, listed stone lice for the first time in its 255th edition. The nihil article seems to prove Loriot's "findings". In addition, the encyclopedia on bogus research that the value of the stone louse in the treatment of information gall , bladder and kidney stones would have recognized, and the subspecies Gallensteinlaus and Nierensteinlaus be mentioned. In the 257th edition of the Pschyrembel, the entry about the stone louse was deleted again. Due to unexpectedly violent reader protests, the stone louse was included in the following edition of 1997 in an expanded form. The process is described in detail in Thorsten Roelcke's technical language , among others .

In the revised version of the Pschyrembel, the “latest findings” were included that connect the temporary disappearance of stone lice with the fall of the Berlin Wall as a source of food.

In the 260th edition of the Pschyrembel, further "recent research results" on stone lice were recorded, for example its application in homeopathy . In the 261st edition published on September 24, 2007, the article on stone louse was again expanded. For example, under “other applications” it is stated that the conditions for a fine dust sticker could be met through the use of specialized stone lice in combination with filters.

In the 1st edition of the "Pschyrembel Psychiatrie, Clinical Psychology, Psychotherapy" from 2009, a scientific classification and reassessment of stone lice phobia is carried out. This phobic disorder manifests itself in an unfounded and persistent fear of stone lice, stone louse pictures and corresponding texts. As a rule, stone louse phobia is coupled with an excessive desire and urge to avoid the cause of fear.

The stone louse in the textbook deposit theory by W. & WE Petrascheck

( An introduction to the science of mineral mineral resources , 4th edition from 1992, ISBN 3-510-65150-2 ) In Chapter II: Formation of deposits through weathering , the common stone louse is also briefly mentioned on page 60 , with reference to the Pschyrembel 1986; Fig. 34 is referenced. A small drawing of the stone louse also illustrates the fictional animal.

The stone louse in the encyclopedia history of medicine

An entry by the Swiss medical historian Iris Ritzmann in the Encyclopedia Medical History claims a predecessor species, the stone eater or lithophagus. This is already mentioned in the Lemma Wolverine in Zedler's Universal Lexicon and played a role in medieval trepanations . Ritzmann claims that the stone-eaters, to which today's stone lice mutatively went back, were exterminated by homeopathic applications in the 19th century, namely with the help of Lapis infernalis C 30 . 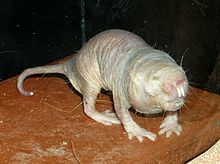 Fraud and Counterfeiting in Science

To protect against fraud and forgery in science and in other areas, stone lice and suitable synonyms are occasionally released in plagiarism traps.