The title of this article is ambiguous. Further meanings are listed under Galgenberg (disambiguation) . 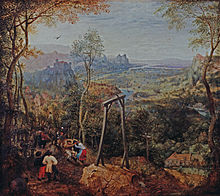 The magpie on the gallows (painting by Brueghel )

On a gallows hill , also called Galgenbühl , gallows hill , in the Middle Ages public executions of convicts took place by the gallows . Hundreds of hills or mountains in the German-speaking area have these names. So the Bismackhöhe in Werder (Havel) , where a group is Christian Morgenstern hit, which gallows brothers called and where the Galgenlieder emerged. Sites were mostly on the demarcation border of places with their own blood jurisdiction and were often placed on heavily frequented roads and crossings or on hills that were visible from afar as a deterrent.

With the construction of stone gallows (gallows towers ), execution sites became permanent locations from the 13th or 14th century. They were visible from afar and mostly right on the judicial border, so that when entering the territory of the city or rulership in question, everyone was made aware of the deterrent punishments of this region. The area, which is often enclosed by a wall, was usually equipped with a gallows, wheel and stake for the execution of various types of death penalty . Depending on the tradition of the place of jurisdiction, the same executioner carried out all executions at the same or at different execution sites.

Those executed often remained visible for a long time on the publicly accessible Gallows Hill and were left to rot, as well as to the dogs, ravens and the weather. With the establishment of the Schafotte , the name Rabenstein was created for its foundations.

Dead bodies were often buried under or around the gallows on the gallows hill. The name Galgenacker was created for a place of execution that is surrounded by an unconsecrated burial ground. Excavations at places with this field name also confirmed that the places of execution sometimes also served as covering places for animal carcasses - an "unholy", ostracized profession like execution, which for hygienic reasons could only be practiced outside the settlements.

Examples of such place and field names see Galgenberg , or in Danish Galgebakken . Many of these 'gallows mountains' cannot be proven by historical sources as places of execution, so that several explanations for the name are possible. Since blood jurisdiction was not granted to every local community in the Middle Ages and modern times, other derivations of the name are likely in most cases (such as a name by the vernacular from 'similarity' of the survey to actual places of execution, or the location a spontaneous execution in times of war like the 30 Years War ).