The NDR Bigband is a big band with 17 permanent musicians of the NDR in Hamburg - 4 trumpets, 4 trombones, 5 saxophones, piano, bass, guitar, percussion. The position of drummer is not permanently filled. The NDR Big Band is no longer a purely male ensemble since the inclusion of guitarist Sandra Hempel in January 2018. 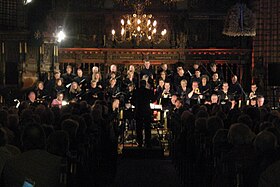 At a concert in 2007 in the Meldorfer Dom

The NDR Bigband emerged from the Hamburg Radio Dance Orchestra, which was founded in May 1945 and was first mentioned on June 6, 1945 as "Kapelle Steiner" in the program banners. It was the "Radio Dance Orchestra under the direction of Willy Steiner ". The orchestra with strings had up to 45 musicians at times. One of the first violinists in this orchestra was Alfred Haus . Franz Thon played the clarinet and saxophone . The saxophonist Kurt Weg led the “small line-up” of the orchestra (wind instruments and rhythm section ) from 1945 . In the summer of 1946 he took over overall management from Steiner. However, conflicts soon arose over the role of the strings and the direction of the music, which in 1947 led to severe listener complaints. Letters to the editor to the Hörzu rejected any jazz orientation of the orchestra; however, there were now numerous petitions from jazz fans . Within the orchestra, the string section grew under Alfred home; In the era of Harry Hermann Spitz , the “Great Dance and Entertainment Orchestra of the NWDR was created in 1948 under the direction of Alfred home” (weg was on leave as was the refrain singer Dorle Rath ).

Under the direction of Franz Thon

Franz Thon , born in Cologne in 1910 , became the head of the “dance orchestra” in 1948, a big band line-up that made its own productions alongside those of the “large” orchestra. This big band under Thon initially remained the "Dance Orchestra of the NWDR" and then, after the NWDR was split into WDR and NDR on January 1, 1956, became the "Dance Orchestra of the NDR under the direction of Franz Thon". From 1951 to 1956 the following musicians belonged to this orchestra: Werner Gutterer, Walter Lattisch, Ernst Herrmann, Paul Kubatsch (trumpets), Günter Fuhlisch , Heinz Reese, Albert Rau, Fred Kleinschmidt (trombones), Fritz Skokann, Heinrich Schneider, Heinz Mihm, Franz Kakerbeck, Willi Surmann (saxophone), Herrmann Hausmann (piano), Martin Böttcher (guitar), Matthias Großeswang (double bass) and Siegfried Enderlein (drums).

At the beginning of 1956 there was a listener survey, a competition: In addition to the NDR dance orchestra, a new dance orchestra with a contemporary sound was to be formed at the Hamburg broadcaster. The orchestra should be given a new, "catchy" name, and that should not be given by the NDR, but suggested by the listeners. The proposal was accepted: The dance orchestra without a name (since March 1, 1956). Franz Thon also took over the management.

From 1963 there were jazz productions with the NDR dance orchestra, to which guest soloists and guest conductors were invited; the orchestra was then announced in the program as "NDR studio band". The orchestra developed into a jazz big band from the 1970s (first concert in 1974 in the factory ) on the initiative of NDR editor Wolfgang Kunert. During this time Dieter Glawischnig joined; He first played in 1973 as a guest pianist with the NDR studio band and in June 1975 he was the first guest conductor at the New Jazz Festival in Hamburg.

Not to be confused with the NDR studio band is the Hamburg studio orchestra at NDR. It was a big band that was used by the broadcaster for television productions. It emerged from the Viktor Reschke orchestra, was directed by Kurt Henkels from 1961 to 1963 and then by Rolf Kühn until 1968 . After this band broke up, some of their musicians switched to the NDR dance orchestra.

In January 1980 Dieter Glawischnig succeeded Franz Thon as chief conductor of the orchestra. 1982 was the first appearance at the Jazzfest Berlin with Bennie Wallace . From around 1990 there was a general orientation towards jazz. Members of the NDR Bigband have been Ingolf Burkhardt , Stephan Diez , since 1993 Christof Lauer , since 1995 Marcio Doctor , Peter Bolte , Reiner Winterschladen , Fiete Felsch , since 1996 Vladyslav Sendecki , since 1998 Stefan Lottermann , since 1999 Claus Stötter , since 2000 Ingo Lahme, since 2001 Frank Delle .

Past programs from 1995 onwards included a Hendrix project (with Örjan Fahlström and Inga Rumpf), an Astor Piazzolla project with Steve Gray, a Zappa project with Colin Towns ( Moers Festival 2004), and projects under the direction of Carla Bley , George Gruntz or Michael Gibbs .

Under the direction of Jörg Achim Keller

In August 2008 Jörg Achim Keller became chief conductor as the successor to Glawischnig with Nils Landgren as artistic advisor. Keller had already arranged for the NDR big band since 1986. During his studies, Keller arranged for Peter Herbolzheimer , the Dutch metropolis Orkest and for well-known jazz musicians. Before he became chief conductor of the hr big band at the Hessischer Rundfunk in February 2000 , he conducted the German Film Orchestra Babelsberg in Potsdam. In 2008 he moved from Frankfurt to Hamburg as the new director of the NDR Bigband. In 2008 Klaus Heidenreich and Ingmar Heller became a permanent member of the formation in 2009 .

With Omar Sosa , the album Ceremony , arranged by Jaques Morelenbaum , was released in 2011 . In 2012 the album Shir Ahava was released with the pianist Alon Yavnai .

Under the direction of Geir Lysne

Geir Lysne has been leading the NDR Bigband since the 2016/2017 season. Keller has been the 1st guest conductor of the NDR Big Band since then. Sandra Hempel (since 2018) and Luigi Grasso (since 2019) became new members . On her 80th birthday, Carla Bley played with the orchestra and the New Hamburg Boys Choir La Leçon Française . The formation toured Poland in 2019 with two Polish programs. In 2020 Percy Pursglove became a permanent member of the big band.

Jazz bands of the ARD