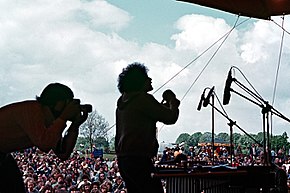 In 1978 the International New Jazz Festival Moers took place in the open air. David Friedman on the vibraphone.

The Moers Festival ( own spelling since 2006 mœrs festival ) is an international music festival in Moers on the Lower Rhine ( North Rhine-Westphalia ). Founded in 1972, initially with two festival days and one year later with three festival days, it took place annually on four days at Whitsun from 1974 to 2010 and was shortened to three days from 2011 due to urban austerity measures. Since 2014 the festival has been taking place in the new festival hall in Moers and is again spread over four days.

In 1972, Burkhard Hennen was the artistic director of the Moers International New Jazz Festival with the support of cultural representatives from the city of Moers. The free jazz festival quickly established itself in the national and international scene of free jazz music.

In the early years, the courtyard of Moers Castle was the venue for the artists. Then in 1975 the festival was moved to the nearby amusement park, as the concerts attracted more and more visitors. After a few years in the open air with lots of downpours, the jazz festival was relocated to the Moers ice rink from 1983 to 1986; From 1987 to 2013 the festival took place in the largest circus tent in Europe in the Moers leisure park. In 1979, Hennen expanded the festival in the mornings with “projects” in which musicians from different groups improvised together .

From 1979 the WDR television recorded the festival regularly and later expanded the cooperation with radio transmissions and recordings in the broadcasters WDR 3 and WDR 5 . In 2002, the WDR's program management pushed for a say in programming. Since the WDR had already increasingly withdrawn from television recording and considered the morning improvisation projects "not broadcastable", Hennen had enough and he terminated the contract with the broadcaster. The public radio station NPS in the nearby Netherlands has been broadcasting live concerts since 2001.

In 1985, Hennen introduced another series into the festival, the African Dance Night , which not only opened up to a new musical spectrum, but also became an attractive offer for non-jazz fans from the region. African superstars such as Mori Kante , Salif Keïta , Cheb Mami or Youssou N'Dour performed and made the audience dance. This event was held in the Moers ice rink, most recently in 2005.

In the course of time, the musical character of the festival expanded from pure, free jazz to world music to the border-crossers of today's popular music such as soul, funk and hiphop . The festival organizers' understanding of free music developed and differentiated constantly, experimental and improvised music discovered and increasingly presented it in the musical styles of other ethnic groups: "The jazz-typical phenomenon of improvisation [has] been cultivated in other musical cultures for centuries ". Some music critics saw this as a dissolution of jazz, others welcomed this development. The list of high profile musicians who have performed at the festival over the years is long. Among other things, played Cecil Taylor , Lester Bowie , Anthony Braxton , Peter Brötzmann , John Carter , Archie Shepp , Sun Ra , Art Ensemble of Chicago , Mars Williams , Shibusashirazu Orchestra , Jamaaladeen Tacuma , Ornette Coleman , to name just a few musicians.

After 34 years, Burkhard Hennen gave up the artistic direction of the festival in 2005 because of further quarrels with the Moers city administration. Reiner Michalke was appointed as the new artistic director by the newly founded “Festival Moers Kultur GmbH”. It has been bearing the mœrs festival word mark since 2006 . When the organizer changed in 2006, the one-day African Dance Night was replaced by nightly projects around the festival site and in the city center.

The city's tight financial budget was used in May 2010 as an opportunity to once again radically question all elements of the festival. For example, it was considered to include all campers in the financing from 2011 or to cancel Whit Monday. Members of the supervisory board of Festival Moers Kultur GmbH , founded in 2005, also wanted to replace the new artistic director Reiner Michalke: "Sections of Moers' political elite hope that the festival will be abolished". In summer 2010 the Moers city council decided to delete Whit Monday as an event day. In addition, since 2011, a fee for the overnight stay in the tent has been charged to visitors who could not present a valid ticket for the concert tent.

Due to the tense financial situation of the city of Moers, there was another wave of austerity in 2012: “Large cultural events like the moers festival should definitely be up for grabs.” A “strike list” published in early June 2012 as part of the budget restructuring plan provided that this festival would not be available from 2014 either promote more. In order to save the festival for Moers and NRW, funding from the state of NRW was under discussion.

Susana Santos Silva 2016 at the festival with her flugelhorn

Since 2014 the festival has been taking place every four days in the new festival hall at the Solimare location, which can hold 2000 visitors . With the former tennis hall, the expansion of which was financially supported by the state and the federal government, it has a permanent venue for the first time in its history. A guarded, free camping area is available for paying festival visitors. Visitors without a festival ticket can also use the area with a separately available camping card. Camping in the amusement park is no longer possible. The dealer market has been greatly reduced in terms of quantity and takes place directly in front of the festival hall. In 2014 around 12,000 visitors came to the festival. In 2015 the festival received the Europe Jazz Network (EJN) Award for Adventurous Programming 2015.

Starting in 2016, the festival will receive additional funds from the federal budget for three years. The organizer, Moers Kultur GmbH, is in financial difficulties after considerable financial losses in 2015, which threatens the continued existence of Moers Kultur GmbH and thus also the festival. The 2016 festival could only take place thanks to a EUR 417,267 guarantee from the city of Moers. In August 2016 Reiner Michalke announced his resignation as artistic director of the festival after further financial quarrels with the supervisory board of Moers Kultur GmbH . Since December 2016 Tim Isfort from Moers has been the new artistic director of the festival, who announced that he would like to create a “completely new festival”. In addition to the 24 concerts in the festival hall, there were almost 60 concerts in the city, in the castle park and in the newly designed festival village, as well as at a further twelve venues such as Röhre and Bollwerk 107.

As part of the festival, Michalke established the improviser-in-residence project in 2008 (in cooperation with nimm! - Network Improvised Music Moers ) , in which a musician lives, works and gives concerts in the city of Moers for one year organized. As a contact person for projects and artistic co-productions, he or she works with children, young people and adults.

The project is financed by the NRW Cultural Foundation .