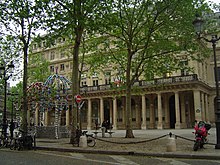 The Comédie-Française (also Théâtre-Français ) is one of six theaters in France that have the status of a national theater ( Théâtre national ) . The Comédie-Française is the only one of these national theaters to maintain a permanent ensemble ( Troupe des Comédiens français ). The house of the Comédie-Française is located in the 1st arrondissement of Paris , the Arrondissement du Louvre. The name Molière is closely related to the theater, which is why it is often called La Maison de Molière (Molière's house). His great influence on the French theater landscape and the art of acting shaped the history of the house. 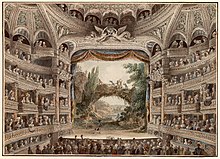 The Comédie-Française was founded on October 21, 1680 by a Lettre de cachet by King Louis XIV , which regulated the amalgamation of the two Parisian drama companies of the Théâtre de l'hôtel de Bourgogne and the Théâtre de Guénégaud . The ensemble, consisting of 27 actors, gave its first public performance on August 24, with a joint performance of the tragedy Phèdre by Jean Racine and a comedy by Jean de La Chapelle (1651–1723). The repertoire consisted mainly of pieces by Molière, Racine, Pierre Corneille , Paul Scarron and Jean de Rotrou .

During the French Revolution , the Comédie-Française was closed on September 3, 1793 by decree of the Welfare Committee and the actors were arrested. It was not until six years later, on May 30, 1799, that the new government overturned this decision and allowed further performances of the reunited ensemble in the Richelieu Hall ( Salle Richelieu ).

On February 25, 1830, on the occasion of the premiere of Victor Hugo's play Hernani in the theater, the so-called “ Battle for Hernani ” took place. The audience was split between supporters of the French classical period and those of the romanticism , which was co-founded by the play, and carried this conflict out loudly during the performance. Ultimately, the followers of the new “romantic” theater won, and deviations from the classic theater rules became more widespread.

The Comédie-Française has three theaters in Paris: the Richelieu Hall , the Théâtre du Vieux-Colombier and the Studio-Théâtre .