Celibidache was the son of a cavalry officer of Greek origin, his maiden name was Celebidachi . However, the German authorities mistakenly exchanged two letters and he continued to use the “wrong” name throughout his life. His mother, Maria, b. Brăteanu, was a chemistry teacher.

Celibidache first studied philosophy , mathematics and music in Bucharest , then in Berlin (composition with Heinz Tiessen , counterpoint with Hugo Distler , conducting with Walter Gmeindl at the Staatliche Hochschule für Musik Berlin and philosophy with Eduard Spranger ), where he finally wrote a dissertation on Josquin Desprez submitted, but was not awarded a doctorate due to the war.

From 1945 to 1952, as successor to Wilhelm Furtwängler , he led the Berlin Philharmonic ad interim . The Croatian pianist Branka Musulin was one of the soloists he frequently engaged at that time. When it came to the official successor to the chief conductor, the Berliner Philharmoniker decided on Herbert von Karajan . There was a break with Celibidache. Only after 40 years, on March 31, 1992, did he conduct the Berliner Philharmoniker again with Anton Bruckner's 7th Symphony , at the request of the then Federal President Richard von Weizsäcker .

From South America to Munich

After his break with the Berlin Philharmonic, Celibidache worked with a number of orchestras in South America, Stockholm , Copenhagen, Italy and Paris. From 1972 to 1977 he took over the direction of the Stuttgart Radio Symphony Orchestra . From 1961 to 1978 he was chief conductor (music director) of the Orchestra Sinfonica Siciliana ; During this time he acquired a steep hillside property in the Quattrocchi locality on the island of Lipari , on which he had a chapel and 8 houses built. He lived in the largest, the main house "Lipari". After 1978 he never returned there. There is speculation that the mafia was involved. From 1979 until his death, Celibidache was General Music Director of the Munich Philharmonic , with whom he achieved great international success. In 1985 he opened the new concert hall on Gasteig in Munich .

In 1984 Celibidache made his US debut with the Student Orchestra of the Curtis Institute Philadelphia at Carnegie Hall in New York City. But in the same year he fell seriously ill, which is why he could no longer fulfill his concert engagements in Munich.

Celibidache died in his old mill in the parish of La Neuville-sur-Essonne near Paris, where he lived with his wife Ioana, a Romanian painter. He is buried in the village's small cemetery. He left behind a son, Serge Ioan Celebidachi (* 1968).

Sergiu Celibidache as conductor of the Berlin Philharmonic in 1946

Unlike Herbert von Karajan, he rejected music marketing on records or CDs and felt himself to be the antipode to Karajan. His explanation for this attitude was philosophical: music is not a preserve that can be captured, it lives in the moment of its creation. Music is also tied to the special space in which it is performed (e.g. a special concert hall), and the richness of music, which can only develop in space, is curtailed by any recording or loudspeaker playback. He therefore refused recordings, so that the first CDs (concert recordings) were only released after his death. The Penguin Guide writes about Celibidache's Bruckner recordings from this time: “For others [his] eccentricities represent an insurmountable obstacle between the composer and the listener ... These recordings are difficult to assess: for Celibidache fans they are worth three stars, [... ] Others, annoyed at his funeral tempos, wouldn't forgive a single one! "

Celibidache was a great admirer of Anton Bruckner , he is known for the saying "That there was Bruckner is for me the greatest gift of God". His interpretations of Anton Bruckner's works have enjoyed international success to this day. They were also performed in the collegiate church of St. Florian (Bruckner's grave) near Linz .

In the wake of Ernest Ansermet's book The Basics of Music in Human Consciousness, he developed a phenomenology of music.

In recent years, Celibidache has been known for its slow tempos. In his opinion, the interpretation of the works he conducted did not allow any self-glorious, harsh and unfounded effects in the music. He had a large audience around the world, but the reactions to his conducting style were mixed and ranged from enthusiastic cheers to uncomprehending criticism. One of his harshest critics was the well-known Munich music critic Joachim Kaiser . This accused him of a lack of internal tension in his interpretations. Celibidache was notorious for its many samples. Therefore it could happen that the interpretation reached its climax and transcendence during the rehearsals and during the concert - due to the rigid previous definition of the orchestral parts and phrasing by Celibidache with little spontaneity - sounded rather low-tension.

When asked what a conductor actually is, he once replied: "Every conductor is a dictator in disguise who, fortunately, is content with music."

It is noteworthy that Celibidache restricted himself as a conductor to concerts and never conducted operas; there were only plans for concert performances of Così fan tutte and Wozzeck (Berg) . 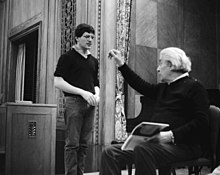 Sergiu Celibidache as a teacher (1984)

Besides the work of Ernest Ansermet and Edmund Husserl , the lessons of Heinz Tiessen and Far Eastern wisdom teachings such as Zen Buddhism played a major role for Celibidache. He was a supporter of the German Zen master Martin Steinke and tried to bring his knowledge and his spiritual awareness directly into making music and to convey it to his students. His intention was to banish any ego of the interpreter from the works and to let the music sound alone. He also resisted the term "interpretation", as this term implies the individuality and thus the ego of the conductor, which in his opinion had no place in the organic process of the work. As a result, much-performed works, especially the symphonies by Johannes Brahms and Anton Bruckner , sounded in a completely new and transcendent way under his leadership .

Celibidache was a gifted teacher and taught seminars and courses at the universities of Trier, Mainz, Munich and Paris, as well as in his domicile. He worked with student orchestras and the Schleswig-Holstein Orchestra Academy . His lessons were free. During his time in Berlin he was a lecturer at the International Music Institute Berlin, one of the predecessors of the Berlin University of the Arts , from 1946 to 1949 , and taught about five students. A well-known student from this time is Carl August Bünte . Other well-known students are the Romanian musician Cristian Mandeal and the Italian conductor Gianluigi Gelmetti . As a composer, the latter wrote the work Prasanta Atma in memory of his teacher Sergiu Celibidache.

In 1953 and again in 1988 Celibidache was awarded the German Critics' Prize, and in 1970 the international Léonie Sonning Music Prize . On November 28, 1954, he received the Great Federal Cross of Merit for his “services to the reconstruction of the Berlin Philharmonic Orchestra after the war”, followed in 1992 by the Great Cross of Merit with a star. In the same year Sergiu Celibidache was awarded honorary citizenship of the city of Munich . It is often said that he was the first foreigner to receive this honor - in fact, Celibidache already had German citizenship at that time . However, because of his ties to Berlin, where he lived from 1936 to 1954, until reunification he only had the "makeshift West Berlin identity card ". He received the Bavarian Order of Merit on July 4, 1991, and the Maximilian Order was awarded to him in 1993. In 1983/84 he was awarded the Premio Abbiati .

In November 2011 the Celibidache Center was founded on the occasion of Sergiu Celibidache's 100th birthday in Munich. The association helps to maintain the musical legacy of the maestro and to carry it further into the world and celebrated Celibidache in October 2012 with the festival “100 Years of Celibidache - The Festival”.

In 1976, Celibidache was portrayed by Fritz Kohlstädt . The 90 × 75 cm oil painting is owned by Süddeutscher Rundfunk in Stuttgart . The picture bears the original signature of Celibidache on the lower left and that of the painter on the lower right.

Celibidache often expressed his dissatisfaction with one of the constituencies with withering grimaces. This enabled him to achieve a very high sample intensity during the rehearsals.

In Munich he was affectionately called "Celi".

Artistic director of the Berlin Philharmonic

Chief Conductor of the Munich Philharmonic