The title of this article is ambiguous. Further meanings are listed under Gasteig (disambiguation) . 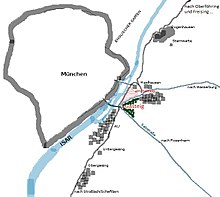 Outside stairs at the Gasteig cultural center 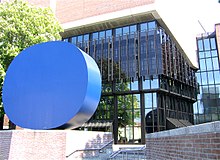 The Gasteig in Munich is one of the largest cultural centers in Europe. It includes the large Philharmonie concert hall with 2,572 seats (including 15 wheelchair spaces and 170 podium seats), numerous event rooms and the headquarters of the Munich Philharmonic , the Munich Adult Education Center , the Munich City Library and the Munich University of Music and Theater (HMTM). The Gasteig is located on the eastern high bank of the Isar within sight of the Deutsches Museum and Müller Volksbad at the Rosenheimer Platz S-Bahn station , in the Haidhausen district .

The building was built from 1978 according to plans by the architects Raue, Rollenhagen, Lindemann and Grossmann and opened in 1984/85. The building complex includes, among other things, the concert hall of the Munich Philharmonic , the city library and the adult education center on 23,000 m² . The facilities have several thousand users every day; the events are attended by 750,000 people annually. Due to ongoing criticism of the rooms and acoustics, the Munich city council approved a general renovation in April 2017. The building is managed by Gasteig München GmbH, which is a 100% holding company of the state capital Munich . "Gasteig" also referred to the ascent to the Isar high bank from Ludwigsbrücke (today Rosenheimer Straße ); "Am Gasteig" is the name of the street adjacent to the cultural center to the northwest (between Rosenheimer Strasse and Innere Wiener Strasse ).

Name and history of the place

The former poor welfare house, in the place of which the cultural center stands (before 1861)

The name is derived from gach-ris = steep climb . Bavarian gach from Middle High German gaehe , Old High German gâhi ; there is a phonetic variant with written German abruptly . The path used to lead from today's Ludwigsbrücke to the church of St. Nikolai am Isar - high bank . It was previously used as a field name for this area and also gives the name to the street Am Gasteig , which branches off from Rosenheimer Straße directly below Gasteig and continues on Innere Wiener Straße. Variants from Munich's prehistoric times were "Gasta", "Gaster" and "Gachsteig". "Gahsteig" and "Geissteigberg" can be found in old literature. The name is found more often in Bavaria and Austria. In ancient times cattle were driven to water troughs on these paths (hints are given by the Schwaige Geiselgasteig near Grünwald, the Menterschwaige or the Ismaningsche Heuzehnt zu Gasteig), here possibly the Auer Mühlbach . Heinrich Noë explained in 1871 that a Gasteig denotes “a ravine that leads to a hill, especially a high river bank; Then this hill, the river bank itself, over which such a path leads. "The" extensive hill "of this name in Munich was" once a sudden and terrifying fall, a constantly rolling gravel mountain ". The Gasteig was probably created as a steep, purpose-built everyday route to the water north of the salt road, which is important for long-distance trade (see the Volckmer map from 1613).

The path was already used before Munich was founded, when the road and bridge over the Isar did not yet exist there. From Schäftlarn coming on the eastern bank of the Isar along from the south of Munich, was reached at Gasteig over to the district Bogenhausen (from 776 n. Chr. In vested directories of the monastery Schäftlarn) and continue towards Freising. The ford near Grünwald in the south of Munich or the old Föhringer bridge in the north were ideal for crossing the raging river . Later this street was an adjacent, crossing part of the Salzstraße.

“Gas-téig” (with “st” and an accent on the 2nd syllable) has established itself as the pronunciation - to a certain extent absurdly - although “Gáschdeig” would be correct according to the origin of the name.

On the premises of the Cultural Center was last used as an old people's home from 1861 to replace an older poorhouse, designed by Arnold Zenetti built in 1974 broken Armenversorgungs- and Employment Agency .

Origin and use of the building

The entrance to the Munich City Library in Gasteig

Once in the bombing in the Second World War, the Odeon and the Tonhalle ( " Kaim Hall "), the two largest concert halls of Munich, had been completely destroyed, which were Munich Philharmonic without their own house. The city library and the adult education center were also inadequately housed, so that in 1969 thought was given for the first time about a city cultural center that would unite these institutions under one roof. When looking for possible locations, the choice fell on the site at Gasteig. In 1971/72 the city of Munich announced an architecture competition for the site, which the architects Raue, Rollenhagen, Lindemann and Grossmann won with their design. In 1978, the then Mayor Georg Kronawitter broke ground. Changes to the plan and constantly emerging problems delayed the construction and drove up the construction costs so that the construction costs in 1980 already amounted to 372 million DM .

In 1984 the building complex on the 23,000 m² area was so far completed that the city library, the Munich Adult Education Center and the Richard Strauss Conservatory could move into their new rooms. At this point in time, events were already taking place in the smaller event halls. On November 10, 1985 , the Gasteig was opened in the presence of the then Federal President Richard von Weizsäcker and 2,400 invited guests with a gala concert by the Munich Philharmonic under the direction of Sergiu Celibidache . The acoustics of the Philharmonie, which are controversial and which many consider to be poor, have been discussed a lot; Leonard Bernstein's saying is often quoted, and after a concert in 1985 he entered “Burn it!” in the guest book of the house, which generated a lot of media attention and an ongoing discussion about the suitability of the house, even if the long-time Gasteig director Eckard Heintz emphasizes that Bernstein's comment referred to his own musical work performed that evening.

The red brick building only got ridiculous names from the population such as B. cultural prison or culture bunker , because the architecture does not fit into the cityscape.

Between the Gasteig and the GEMA building, a commemorative floor plaque was placed in 1989 to commemorate the unsuccessful assassination attempt by Georg Elser on Adolf Hitler . Also between the GEMA building and Gasteig, the Erich Schulze fountain has stood since 1990 in honor of the longstanding GEMA General Director Erich Schulze in the form of a seven meter high brass tuba with a stone concert grand as an outlet.

After 25 to 30 years of use, a general renovation was applied for due to increased fire protection requirements and damage to the building that occurred during the period of use. This was postponed several times because the resulting renovation of the Philharmonie was related to the plans for the construction of another concert hall in Munich. As part of this decision, consideration should also be given to whether the adult education center and city library will remain at the location in the long term. In January 2015, the Bavarian Prime Minister Horst Seehofer campaigned for the concert hall to be demolished and rebuilt.

In April 2017, the Munich city council gave the green light for a general renovation. According to the city council resolution in June 2019, the Munich architectural office Henn will carry out the renovation. The Gasteig is expected to be closed for a comprehensive general renovation at the end of 2021. A conversion time of four years and costs of around 450 million euros are expected. For this time, an interim quarter will be built in Sendling (corner of Schäftlarnstrasse / Brudermühlstrasse).

The following cultural institutions of the state capital of Munich are based in the Gasteig:

Philharmonic and other halls

The following event and concert halls are located in the building :

Organ of the Philharmonic

The organ of the Philharmonie was built in 1985 by the organ building company Johannes Klais (Bonn). The instrument has 74 registers (approx. 6,000 pipes) on four manuals and a pedal. The disposition is based on that of French symphonic instruments. A special feature is the horizontal trumpet ensemble in the main work. The organ can be operated from two console tables: from a mechanical console in the organ gallery and an electronic console that can be used on the stage of the Philharmonie. The organ case is asymmetrical. The instrument was completely renovated and re-intoned in 2004, whereby the instrument - in adaptation to the acoustics of the Philharmonie - now sounds more fundamental. Since 2001 Prof. Friedemann Winklhofer has been the custodian of the organ.

Several thousand visitors come to the Am Gasteig Central Library every day, as well as to exhibitions, lectures, film screenings, readings, classical and modern concerts, theater and ballet performances. Every year the Munich Book Show , the Art and Culture Festival Digitalanalog and the Munich Film Festival take place in Gasteig. In terms of visitor numbers, Gasteig is the largest cultural center in Germany. The Gasteig has up to 10,000 visitors a day. With around 750,000 visitors annually in the event halls alone, the house is currently one of the most popular cultural establishments in Germany.

The Gasteig is operated by Gasteig München GmbH, an investment company of the City of Munich .