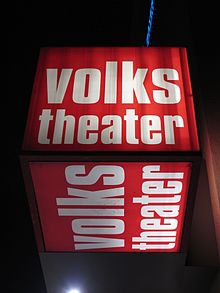 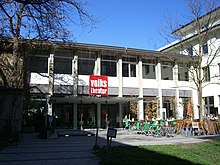 The Münchner Volkstheater is a municipal theater in Munich . It is supported by the Munich Culture Department.

In 1903, the architects Gerstenecker and Tittrich built a representative reinforced concrete structure under this name on Josephspitalstrasse in the Altstadt-Lehel district . In the same year it could be opened with Schiller's Kabale und Liebe . It had about 1000 seats.

Elise Aulinger received her first engagement here as early as 1903 . The first performance was on November 10th, 1903. Ernst Schrumpf was initially in charge . Wilhelm Braun assisted him administratively. A report in the Munich Ratsch-Kathl dated November 16, 1904, shows that the theater was already well known throughout Germany a year later. At this point in time the 54th play was being played at the house.

The actor Rolf Pinegger , who remained loyal to the Volkstheater throughout his life, was engaged since 1907 . After the First World War, Ernst Bach was director of the theater. There were a few Schwänke premiered, for example on December 25, 1921 Der chaste bon vivant by Bach and Franz Arnold .

In 1932 Ludwig Schmid-Wildy became senior director of the then privately run theater. From 1934 to 1938 Ferdinand Dörfler worked here as an actor, tenant and director. From 1933 to 1941 Willy Rösner was part of the Volkstheater ensemble . It was destroyed by bombs in World War II.

The theater on Brienner Straße , built in 1955 , originally a multi-purpose hall in the Haus des Sports, was converted into today's Volkstheater in 1983 and has since then seated 609 spectators. A large part of the cost of 3.9 million marks was borne by public donations in addition to the city's funding. At the opening, Ruth Drexel staged the play Faith and Home by Karl Schönherr . The first director was Jörg-Dieter Haas from 1983 to 1988 , the ensemble consisted of a group of well-known folk actors (e.g. Gustl Bayrhammer , Beppo Brem , Helmut Fischer , Willy Harlander , Karl Obermayr , Enzi Fuchs , Rita Russek , Maria Singer , Peter Thom , Michael Lerchenberg ). In 1989 the "Nachtkastl", a variable stage platform with 120 seats, was added as a further venue. Ruth Drexel managed the house from 1988 to 2002, interrupted by a brief interim management by Hanns Christian Müller from 1998 to 1999.

The program mainly featured the classics of southern German-Austrian dialect literature, as well as works from the non-German folk theater tradition, but also plays by Goethe , Schiller , Shakespeare , Molière , Brecht and others.

In 2002 Christian Stückl became director, who was best known for his productions of the Oberammergau Passion Play in 1990 and 2000. With a young ensemble and up-and-coming directors , the Volkstheater was able to gain a new profile within the theater scene and at times achieved almost 90 percent seat occupancy.

Radikal jung - The Festival of Young Directors has taken place once a year since 2005 .

Since 2006 the Münchner Volkstheater has published the magazine “Volksmund” once a year instead of a season booklet. The edition for the 2007/08 season was described as a “gorgeously funny” ( tz ) new discovery with a “columnist claim” ( Münchner Merkur ).

Relocation and new building by 2021

In December 2017, the winning design for the new building was presented on a total of almost 18,000 square meters at Zenettiplatz, with a hall with, as before, 600 seats and a workshop stage and a rehearsal stage. The city jury decided in favor of the design of the planning office community around the company Georg Reisch from Bad Saulgau, created by the Stuttgart architectural office Lederer Ragnarsdóttir Oei, at a total price of almost 131 million euros. The lease of the Volkstheater on Brienner Strasse with the Bavarian Football Association will expire at the end of 2020 .