The title of this article is ambiguous. Further meanings are listed under palladium (disambiguation) .

Palladium is a chemical element with the element symbol Pd and the atomic number 46. ​​The rare, silver-white transition metal , together with platinum , rhodium , ruthenium , iridium and osmium, forms the group of platinum metals , gray to silver-white metals with related chemical and physical properties. In the periodic table it is in the 5th period and the 10th group or nickel group . It used to be classified in the 8th subgroup .

The metal was discovered in 1802 by William Hyde Wollaston , who was studying methods of processing platinum ores. He named it after the then just discovered asteroid Pallas , which at that time was thought to be a planet. The asteroid, in turn, was named after the epithet of the Greek goddess Athena .

In addition to platinum and rhodium, palladium is an economically important platinum metal and is used in large quantities for the production of three-way catalysts . It is also used in electronics, dentistry, fuel cells and many other areas, such as the jewelry industry, where it is alloyed with gold to form white gold. Extensive deposits have been found in South Africa in the Bushveld Complex , in the Stillwater Complex in Montana and in Ontario , Russia and the Philippines , where it occurs naturally as a companion to gold and platinum metals. 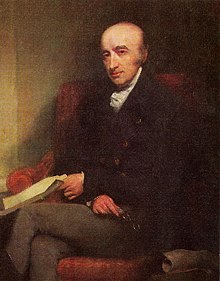 Palladium was unwittingly used as a component of platinum alloys by the pre-Columbian Indians of Ecuador and Colombia . A number of platinum jewelry items were found there that contained around 85% platinum, 7% iron and 4.6% of a mixture of the platinum metals palladium, rhodium and iridium as well as copper .

William Hyde Wollaston discovered palladium in a South American platinum ore in 1802. He had dissolved the ore in aqua regia and then neutralized the solution with sodium hydroxide . Then he precipitated the platinum with ammonium chloride as ammonium hexachloroplatinate and separated it off. By adding mercury cyanide to the remaining solution, Wollaston obtained palladium cyanide , from which he obtained metallic palladium by heating.

As early as 1866, Thomas Graham noticed the astonishing storage capacity of finely divided palladium for hydrogen , which can take up about 900 times its own volume of hydrogen gas at room temperature and atmospheric pressure. This led to the assumption that hydrogen is a very volatile metal and that the palladium with the enclosed hydrogen is an alloy of this volatile metal.

Francis Clifford Phillips , an American chemist, discovered the stoichiometric oxidation of ethene to acetaldehyde using palladium (II) chloride in 1894 when he was studying the oxidation of naturally occurring hydrocarbons. Towards the end of the 1950s, Wacker-Chemie converted the stoichiometric reaction found by Phillips in the Wacker-Hoechst process into a catalytic variant. In the process, with which millions of tons of acetaldehyde and its secondary product acetic acid were produced each year , the chemical industry used a palladium catalyst in a large-scale application for the first time. It was also the first large-scale homogeneous catalytic process.

From the late 1960s, palladium salts were used for coupling reactions . From this, important reactions developed for organic chemistry such as the Heck reaction , the Stille coupling , the Suzuki coupling or the Negishi coupling . Three of the researchers involved, Richard F. Heck , Ei-ichi Negishi and Akira Suzuki , received the 2010 Nobel Prize in Chemistry for this .

Electrochemical adsorption experiments by Martin Fleischmann and Stanley Pons in 1989 with the palladium- deuterium system became known as “ cold fusion ” and made headlines around the world. The "cold fusion" of deuterium, which was supposedly triggered by palladium, was for a short time a scientific sensation with the hope that this could provide a practically inexhaustible source of energy.

Metallic palladium and alloys containing palladium are found mainly in river sediments as geological soaps in the Urals , Australia , Ethiopia and in North and South America . However, they have been largely exploited for decades.

Today it is mostly extracted from nickel and copper ores . In 2011, around 41 percent (85,000 kg) came from Russian production, followed by South Africa with around 37.5 percent (78,000 kg). Canada followed a long way behind with just under 9 percent (18,000 kg) and the USA with 6 percent (12,500 kg). In the “platinum metal group” (platinum, palladium, iridium, osmium, rhodium and ruthenium), South Africa has 63 million kilograms of 66 million kilograms of reserves, more than 95 percent of the world's reserves.

With the disposal of old cars, the proportion of recycled palladium from the catalytic converters will increase. Palladium can be selectively separated from other metals in hydrochloric acid solutions by means of di-n-hexyl sulfide . 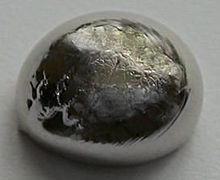 Palladium is a metal . It has the lowest melting point of the platinum metals and is also the most reactive. However, it does not react with oxygen at room temperature . It retains its metallic sheen in the air and does not tarnish. When heated to around 400 ° C, it turns steel blue due to the formation of an oxide layer of palladium (II) oxide . At about 800 ° C the oxide decomposes again, whereby the surface becomes bright again. In the annealed state it is soft and ductile , but when cold worked , the strength and hardness increase quickly (work hardening ). It is then significantly harder than platinum. At temperatures above 500 ° C, palladium is sensitive to sulfur and sulfur compounds such as gypsum . It is formed of palladium (II) sulfide , that the embrittlement results of palladium and palladium alloys.

Palladium is a noble metal , even if it is significantly more reactive than its related element platinum: It dissolves in nitric acid , forming palladium (II) nitrate Pd (NO 3 ) 2 . It also dissolves in aqua regia and in hot concentrated sulfuric acid . In hydrochloric acid , it slowly dissolves when exposed to air, forming PdCl 4 2− . The noble metal character of palladium is comparable to that of the neighboring silver : In hydrochloric acid, it behaves in a non-noble manner due to the formation of easily soluble palladium chloride compounds. In a humid atmosphere in the presence of sulfur, the surface of palladium becomes cloudy.

Palladium has the highest absorption capacity of all elements for hydrogen . This fundamental discovery goes back to Thomas Graham in 1869. At room temperature it can bind 900 times, palladium black (finely divided black palladium powder) 1200 times and colloidal palladium solutions 3000 times its own volume. The hydrogen uptake can be described as the dissolution of hydrogen in the metal lattice and as the formation of a palladium hydride with the approximate composition Pd 2 H.

It usually takes on the +2 and +4 oxidation states. Compounds with the apparent oxidation state +3 are mostly Pd (II) / Pd (IV) mixed compounds. The trivalent oxidation state of palladium was stabilized in the form of NaPdF 4 . This complex is synthesized under high pressure, compounds of the elpasolite type A 2 BPdF 6 , where A and B are different alkali metals, are obtained via solid-state reactions. These compounds have a strong tendency to disproportionate in Pd (II) / Pd (IV) compounds. Furthermore, trivalent palladium was shown as a relatively stable lanthanum palladium oxide with the composition LaPdO 3 .

Palladium is not flammable in compact form, but is highly flammable as powder or dust.

Use as a catalyst

A Lindlar catalyst is a heterogeneous contact consisting of palladium deposited on calcium carbonate . The palladium content of the supported catalyst is about 5%. To reduce the catalytic activity, the palladium is poisoned with lead , sulfur or quinoline, for example . It is used for the hydrogenation of alkynes to alkenes , for example for the reduction of phenylacetylene to styrene without further reduction to alkanes, and is named after its inventor Herbert Lindlar .

Palladium (II) chloride is used as a catalyst in the Wacker-Hoechst process . An anionic palladium (II) -ethene complex, the trichloridoethylene palladinate (II) anion, is formed from palladium (II) chloride, ethene and a chloride ion and is equivalent to Zeise's salt . The ethene ligand has a strong trans effect , which weakens the binding of the trans chloride ligand and enables the addition of water while displacing a chloride ion. This exchange ultimately creates an anionic ethene-hydroxo complex again. By inserting the ethene ligand into the Pd-OH bond and adding water, a 2-hydroxyethyl complex is formed. Ultimately, the elimination of acetaldehyde and two hydrogen ions produces metallic palladium, which is reoxidized by copper (II) salts. The resulting copper (I) salts can be reoxidized by air in the presence of acid.

The Rosenmund contact is a catalyst produced by reducing palladium (II) chloride in the presence of BaSO 4 . It is used in Rosenmund reduction , a hydrogenation process in which an acyl chloride is reduced to an aldehyde . The reaction was named after Karl Wilhelm Rosenmund , who first reported it in 1918. Barium sulfate serves as a metal carrier and limits the activity of the palladium and thus prevents a reduction beyond the level of the aldehyde. The activity of the palladium can be further reduced by adding catalyst poisons such as thiourea .

Use in the jewelry industry

Use in the chemical industry

The biological effectiveness of the palladium complex bis (diphenylphosphino) -2-ethylpyridylpalladium (II) chloride against Mycobacterium tuberculosis with simultaneous inhibition of the HIV-1 protease was demonstrated in vitro . This would facilitate the treatment of HIV , which is often complicated by co-infection with Mycobacterium tuberculosis.

The name for palladium, which is traded on the stock exchange, is XPD. The international securities identification number is ISIN XC0009665529.

Compounds of palladium with a metal oxidation number of 0, +2, +4 and +5 are known. As with nickel and platinum, a number of compounds (often complexes ) are known in which the metal is coordinated in a square-planar manner by four ligands .

With the initial issue date 6 June 2019 which gave German Post AG in the series microworlds a postage stamp in the nominal value of 85  euro cents out. The brand image shows a microphotograph with 230x magnification of the crystalline palladium. The design comes from the graphic designer Andrea Voß-Acker from Wuppertal.