Schematic representation of the electron shell of the silver atom in Bohr's atomic model (note: silver does not correspond to the structural principle )

The electron configuration indicates the distribution of electrons in the electron shell of an atom to different energy states or lounges ( atomic orbitals ).

The state of each electron in the shell is determined according to the Bohr-Sommerfeld atomic model and the orbital model using four quantum numbers :

Sequence of the electron shells in an atom according to Bohr's atomic model . The red point in the middle represents the atomic nucleus.

According to the Pauli principle , no two electrons of an atom must have the same state in all four quantum numbers. With this principle it can be shown that the electrons are distributed to the various permitted states and thus to the shells and subshells.

The main quantum numbers determine the shells, the secondary quantum numbers the sub-shells. Each shell, according to the limitations of , and be filled with a maximum 2n² electrons. The shells are designated in ascending order, starting with the core shell, with capital letters: K, L, M, N, O, P, Q ... The orbitals are named according to the series of spectral lines that an excited electron emits when it is in original orbital falls back; For historical reasons, the first four series are called s (“sharp”), p (“principal”), d (“diffuse”) and f (“fundamental”).

The outermost occupied shell ( valence shell ) determines the chemical behavior and is therefore decisive for the classification in the periodic table .

Filling the bowls according to the build-up principle 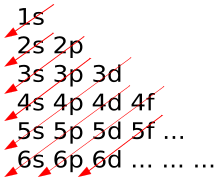 Rule of thumb: Order of appointments along the red arrows (for exceptions, see structure principle )

As the number of electrons in the elements increases , the possible states - starting with the lower energies - are occupied. According to Hund's rule , the orbitals of the same energy are first assigned once, then twice.

The sub-shells are filled in the following order (in rows, i.e. in periods):

Relation to the periodic table

The blocks of the periodic table

In the periodic table, the occupation of the s orbital of a new shell corresponds to the jump into a new period .

The electron configuration of an atom is described by the occupied subshells:

The subshells are not to be specified according to the construction principle, but in the order of the main quantum number; so z. B. for europium : [Xe] 4f 7 6s 2 .

In addition, the cell or Pauling notation is common as a clear graphic representation.