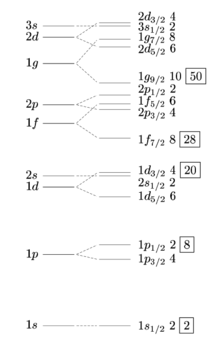 Energy levels according to the single-particle shell model with oscillator potential (with a small negative term): left without, right with spin-orbit interaction . The numbers to the right of the levels indicate the multiplicity ( 2j + 1 ). The numbers in boxes are the “magic numbers”.

The shell model in nuclear physics is a model of the structure of atomic nuclei . It relies on quantum mechanical laws, primarily due to the angular momentum - quantization and the Pauli principle , and declared as such. B. successful the magic numbers .

While the droplet model compares the atomic nucleus with a water droplet, the behavior of which can essentially be described using classical mechanics, the shell model considers the individual nucleons and their movement in a potential field according to the rules of quantum mechanics, similar to the shell model for electrons in the atomic shell . Like the electron, protons and neutrons have the spin quantum number  1/2. However, there are important differences to the atomic shell:

A Woods-Saxon potential appears to be well suited for the description . Since this can only be treated numerically , one chooses, for example, a similarly running modified potential of a harmonic oscillator for the analytical treatment . As solutions of the Schrödinger equation, discrete energy levels are obtained which, depending on the quantum numbers, can accommodate certain numbers of particles; they are - based on the description of the atomic shell - called "shells".

The levels for protons and neutrons are not the same, because the electrical charge of the protons ensures, through mutual repulsion, that the proton levels are slightly higher than those of the neutrons. For most nuclides (up to around 80 protons) the distance between the levels is approximately the same for protons and neutrons, so the two level schemes are essentially only shifted from one another. This can be confirmed with mirror cores . This shift corresponds to the Coulomb component in the droplet model .

The number of identical particles that can be found on a shell is limited by the Pauli principle. The 1s shell z. B. is already fully occupied with two nucleons, and an additional nucleon “must” occupy the 1p shell with a correspondingly higher energy.

If all proton or neutron shells in a nucleus are either completely filled or empty, this is a particularly stable configuration, comparable to the noble gases in chemistry; the particular stability is evident in many properties and measured variables. Such cores are also called magic cores . The magic numbers observed on naturally occurring nuclides are:

The magical proton and neutron numbers that can occur together in the same nucleus are highlighted in bold; such cores are called doubly magical .

The magic numbers differ from the corresponding numbers in the atomic shell . The reason is the stronger spin-orbit coupling in the atomic nucleus . With a total of 28 particles of a species, the energy gap between allowed states is not created by full occupation of a shell, but by the spin-orbit coupling of the 1f level. As with electrons, f-level means that the secondary quantum number (orbital angular momentum quantum number ) is l = 3. With the spin quantum number  s = ± 0.5, the possible total angular momenta  j = l + s is 3.5 and 2.5, whereby j = 3.5 is energetically lower than j = 2.5. If all states are occupied by j = 3.5, a more stable level is obtained for the magic number 28.

The spin-orbit coupling is basically similar to the fine structure splitting of the electron levels in the atom . However, in the atomic nucleus the strong nuclear force takes the place of the electromagnetic interaction ; The splitting of the nucleon orbitals is therefore both absolutely and relatively much larger than that of shell electrons, and the state with j = 3.5 is energetically more favorable (lower) than that with j = 2.5. In simple terms: electrons “want” to minimize the total angular momentum  j , nucleons “want” to maximize it.

The shell model was first proposed in 1932 by Dmitri Ivanenko and Yevgeny Gapon. It was drawn up in 1949 by Maria Goeppert-Mayer and independently in the same year by J. Hans D. Jensen and his colleagues Otto Haxel and Hans E. Suess . Goeppert-Mayer and Jensen received the Nobel Prize in Physics for this in 1963 . The fact that the shell model can be used meaningfully despite the strong nucleon-nucleon force (see above) was not made until 1955 by Keith Brueckner et al. M. made understandable who developed approximate solutions for the many-body problem .