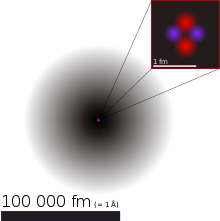 A helium atom . The atomic nucleus (shown in pink) is embedded in a comparatively large cloud of electrons (gray). If the representation were to scale, the gray cloud would have about 5 m in diameter. The core, which is actually spherically symmetrical, is enlarged again at the top right .

The atomic shell or electron shell is the outer part of an atom that consists of electrons . The division of an atom into an atomic nucleus and an atomic shell goes back to Ernest Rutherford , who in 1911 showed in scattering experiments that atoms consist of a tiny, compact core surrounded by a shell.

The structure of the electron shell largely determines not only the size of the atoms, but also the chemical properties. The outer part of the atomic shell, the valence shell, is responsible for the chemical bonds . The distribution of electrons in the electron shell of an atom to different energy states or lounges (the quantum mechanical model is the atomic orbital ) is dealt with in the articles electron configuration or in the corresponding section of the article atom .

The electron shell of an atom is explained in detail in many introductory books on atomic physics. Examples are mentioned here