The celesta ( plural: celestas ) is an idiophone in the shape of a small piano or harmonium , in which steel plates are struck with felt-covered hammers over a keyboard and a piano mechanism . The sound plate is attached to a wooden resonator . The sound of a celesta is similar to that of a glockenspiel , so it is generally rich in overtones, but with a softer timbre . The play options on the Celesta are also significantly more diverse; Thus, through the keyboard and the keyboard glockenspiel, it enables not only individual beats, but entire scale runs, glissandi, arpeggios and large-scale chords. The name originally comes from the French céleste , which means “heavenly”. The celesta is mainly used as an orchestral instrument.

In 1788, the Irishman Charles Glaggett invented an instrument called the Aiuton , the sound of which was said to be neither surpassed by a glass harmonica nor by a string instrument in terms of "sweetness" and softness . To achieve this sound, Glaggett attached a series of tuning forks, or metal prongs, to a hollow case, which were struck by hammers that could be moved by keys. This instrument with a range of three to six octaves never got beyond the experimental stage.

Victor Mustel , the inventor of the later celesta, had already invented the typophone in 1866 , also an instrument with a keyboard and tuning forks to stimulate the sound. Its sound is said to have been very similar to that of the Celesta, but it was much quieter and therefore could not prevail. This instrument is more closely related to the dulcitone , which was invented by Thomas Machell & Sons in Glasgow in 1874 .

Scheme of the Celesta mechanism according to Mustel .

The old idea from the 18th century, on the one hand to produce a tone as soft as possible, a dolce sound, which on the other hand achieved a certain volume of sound, finally led to the invention of the celesta around 1868. The idea of equipping a metallophone with a keyboard was already known from the keyboard glockenspiel.

The harmonium maker Victor Mustel invented an instrument called the "Celesta" in Paris in 1886, which was shown to the public for the first time in 1889 at the Paris World Exhibition . It was four octaves in range. This instrument fulfilled high sonic requirements and should establish itself as an orchestral instrument. Mustel's Celesta already corresponded structurally to the modern instrument with keyboard, steel plates, resonators, pedal and had the desired "sweet" sound.

In 1890, J & P Schiedmayer , later the Schiedmayer Pianofortefabrik, produced the first celesta in Germany based on Mustel's patent. The range reached over five octaves, sounding from c to c 5 . Since the lowest octave sounded unsatisfactory, the second generation of Celestians built instruments with a four-octave range, starting with the sounding c 1 . Production of Mustels ceased in the mid-1970s.

The company Schiedmayer Celesta is the only manufacturer to manufacture instruments with sound bars struck from above according to the Mustels patent with a range of up to five and a half octaves. The only two other manufacturers from Celesten, Yamaha and Kolberg , on the other hand, use adapted grand piano mechanisms in which the sound bars are struck from below.

Inside view of a celesta.

The celesta looks like a small piano or a harmonium , so it consists of a housing with keyboard and pedal. Inside are the steel plates, the resonators and the complicated stop mechanism. The primary tone generators are steel sound bars that are placed on felt strips over hollow wooden resonators. The steel plates are struck from above with felt-covered hammers. The hammers are mechanically linked to the keyboard. As with a piano, not all of the celesta hammers are of the same size and weight: for the lower notes, larger hammers with a thicker layer of felt produce a particularly soft sound. This soft sound in the lower register is one of the advantages of the Celesta.

Celesta with the back wall removed.

A hollow wooden box is attached as a resonator under each steel plate and is precisely tuned to the respective basic pitch. Its task is to reinforce the basic tone and the aftertaste of the respective steel plate. This is particularly important for acoustic reasons, since the steel plates have a high proportion of inharmonic partials. The resonator promotes the fundamental and suppresses the inharmonic partials. A clear pitch impression is thus ensured. Since the resonators for the lower tones in particular take up a lot of space, they are arranged with the associated steel plates on two levels, alternating above and below over the entire range.

As with the piano, pressure on the pedal removes the damping and the tones linger.

Difference to the keyboard glockenspiel

The most important difference to the keyboard glockenspiel are the resonance bodies, which increase the volume and thus not only enable a larger tonal range downwards, but also the touch with soft felt hammers. This makes the sound softer and more fundamental than with glockenspiel with hard mallets made of metal or hard plastic, which lead to a metallic, penetrating sound.

The celesta is a transposing instrument , which sounds an octave higher than it is recorded - mostly like a piano with violin and bass key or two treble clefs.

There are instruments of different sizes with a range of four to five and a half octaves. 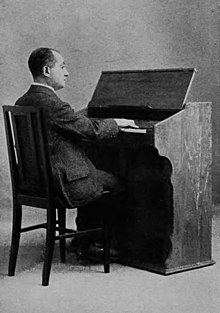 Ernest Chausson used it in 1888 in a chamber music line-up alongside flute, violin and harp in his incidental music La Tempête for Shakespeare's play The Tempest .

Pyotr Tchaikovsky was one of the first composers to use this instrument in an orchestra, in 1891 in his symphonic ballad The Voivode . In his ballet music The Nutcracker , composed in 1892, the celesta can also be heard as a soloist in the dance of the sugar fairy . Even Richard Strauss used the instrument in the opera Der Rosenkavalier (with the presentation of the silver rose in the second act), in Ariadne auf Naxos and Die Frau ohne Schatten .

The music for stringed instruments, percussion and celesta by the Hungarian composer Béla Bartók and The Planets by Gustav Holst - where the celesta sounds in the last movement Neptune, the mystic at the end - are also frequently heard in concert halls .

The celesta can be found in many pieces by the American composer Morton Feldman - for example in the piece Rothko Chapel for mixed choir, solos and ensemble from 1971. It is often used by the pianist as a second instrument; then referred to in the scores as "piano (also celesta)".

Film music lovers is the instrument mainly by the main theme of Hedwig's Theme from John Williams ' "Harry Potter" - Soundtracks a term. The celesta is also a frequent 'guest instrument' in many other film soundtracks; its bright timbre is ideal for doubling the scales of the woodwinds or strings.

John Cale sat in the play Northern Sky by Nick Drake on his album Bryter Layter 1970 also celesta one.

Today, difficult glockenspiel parts are performed on the celesta that were originally written for a keyboard glockenspiel (for example in Mozart's Die Zauberflöte ).