Logo of the Dresden Philharmonic (since 2019) 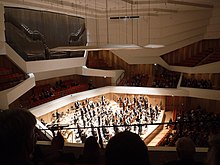 The Dresden Philharmonic in the renovated Kulturpalast

The Dresden Philharmonic is a concert orchestra financed by the city of Dresden , which was founded in 1871 as the “Gewerbehaus-Kapelle”.

Olivier von Winterstein was the director of the orchestra from 1992 until his death in July 2004 , followed by Anselm Rose on an interim basis until the end of 2004 and regularly from January 2005 to December 2014 . His successor has been Frauke Roth since January 2015 .

Logo of the Dresden Philharmonic until the 2018/2019 season

For the 2019/2020 season, the Dresden Philharmonic gave itself a new corporate design with a new logo. While there were previously two notes that were reminiscent of the initials d and p, the new hexagonal logo is based on the concert hall in the Dresden Kulturpalast.

The orchestra's home venue is the Kulturpalast on Altmarkt in Dresden, which includes a modern concert hall with excellent acoustics. The building was erected in 1969 as a multi-purpose building and opened by the then chief conductor Kurt Masur .

For years there has been a desire in Dresden for a new, clean, concert hall for the Dresden Philharmonic. This had to be postponed again and again for fiscal reasons. For this reason, too, Marek Janowski , who had linked his chief conductor activity to the construction of a new concert hall, gave up this position in 2003 after only two years after his appointment, after he had to be informed that this new building or the start of construction within his contract period was not possible due to the financial situation of the city ( Elbe flood 2002 ). Only the debt relief of the city under Mayor Ingolf Roßberg enabled the necessary financial leeway, which nevertheless required further years of planning. In 2012, after a long planning process, it was closed for extensive renovation work and the installation of a new, pure concert hall.

From 2012–2017 the orchestra was based in the Waldschlösschenviertel , where rehearsal rooms, instrument storage and administrative offices were located. The opening of the new concert hall and the associated return of the orchestra to its traditional venue, the Kulturpalast Dresden , took place on April 28, 2017.

In August 2016 there were 116 permanent positions and, under the direction of chief conductor Michael Sanderling, a complete recording of the symphonies by Dimitri Shostakowitsch and Ludwig van Beethoven was in the making.

Since the 2017/18 season, up to 10 music students from the Carl Maria von Weber University of Music in Dresden have been able to gain their first professional experience at the Dresden Philharmonic as part of the Kurt Masur Academy.

The Dresden Philharmonic opened the concert hall within the Dresden Kulturpalast on April 28, 2017 after a construction period of over four years . Until then, from 2012 onwards she performed symphony concerts in the Albertinum and the Schauspielhaus , followed by a series of chamber concerts at Albrechtsberg Castle , concerts in the German Hygiene Museum in Dresden, family concerts, school concerts and special concerts in the Frauenkirche , the Kreuzkirche and on special occasions at other locations. Some of these venues will continue to be used. In addition, the orchestra tours all over the world and has an outstanding number of subscribers in Germany-wide comparison (more than 10,000).

Chief Conductor of the Dresden Philharmonic