Daniel Libeskind in front of the Bundeswehr Military History Museum in Dresden , which he redesigned (2011)

Daniel Libeskind (born May 12, 1946 in Łódź , Poland ) is an American architect and urban planner of Polish- Jewish origin. He is known for his multidisciplinary approach to architecture. His main works include larger cultural institutions such as the Jewish Museum Berlin , the Felix-Nussbaum-Haus in Osnabrück, the Denver Art Museum and the Imperial War Museum North in Manchester, but also landscape and town planning as well as designs for exhibitions, stage sets and installations.

In the summer of 2002 he designed the set for Saint François d'Assise by Olivier Messiaen at the Deutsche Oper in Berlin. The first plans for the One World Trade Center in New York , which opened on November 3, 2014, were made by him, but since these could not be reconciled with the complex interests of those involved, the task was finally passed on to David Childs and Libeskind's role on the of a consultant in the overall planning. In 2014, a new building in the Kö-Bogen in Düsseldorf was completed according to his design . 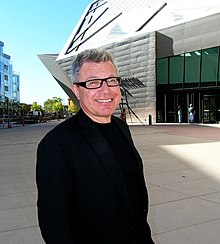 Libeskind was born on May 12, 1946 in Łódź (Poland). In 1957 the parents emigrated to Israel . Libeskind and his family moved to the United States in 1960 and took American citizenship in 1965. His mother was a political radical, socialist, and Zionist . In the United States, they lived in a cooperative apartment in the Bronx . He studied music in Israel and New York and worked as a professional musician, since he was a kind of prodigy on the accordion even as a child.

He later switched from music to architecture . In 1970 he graduated from the Cooper Union for the Advancement of Science and Art in New York City, and in 1972 a master's degree in architectural history and theory from the School of Comparative Studies at the University of Essex . From 1978 to 1985 Libeskind was Dean of the Architecture Faculty at the Cranbrook Academy of Art in Bloomfield Hills, Michigan. He received numerous honorary doctorates , for example from Humboldt University in 1997 and from his former alma mater , the University of Essex, in 1999 .

In 1989 he moved with his family to Berlin , where he founded the architecture office “Studio Daniel Libeskind”. He also taught as a professor at the Berlin-Weißensee School of Art . After winning the architectural tender for the new World Trade Center in February 2003, he relocated the headquarters to New York City, where he still lives today. There are branches in Zurich and Milan.

Libeskind taught at the universities of Yale , London , Zurich , St. Gallen , Graz , Berlin-Weißensee , Karlsruhe and Lüneburg , among others . At the Leuphana University of Lüneburg in 2007, Libeskind accepted the professorship in "Architectural Design" and now teaches there primarily in the start week as well as in complementary courses.

In 2010, Libeskind was awarded the Buber-Rosenzweig Medal : "Libeskind always succeeds in creating a dialogue between architecture and the history of the Jews through the inspiring spatiality of its work." (German Coordination Council for the award)

Daniel Libeskind's architecture is characterized by a narrative language of forms. It uses elements that explicitly refer to non-architectural content and thus receive a different semantic meaning. Examples of this are the “ Holocaust Tower” in the Jewish Museum Berlin or the height of the Freedom Towers (now One World Trade Center) that he designed as a new building for the destroyed World Trade Center , which - measured in American feet - is the year of the declaration of independence United States of America 1776 corresponds.

Libeskind's architectural drawings are often littered with verbal references that place his projects in a context other than that which is evident from the architecture itself. This approach also repeatedly leads to fierce controversies about its architecture. On the one hand, Libeskind is praised for his complex understanding of architecture, with which he opens up new possibilities of expression for architecture. On the other hand, he is often exposed to severe criticism. He is accused of overloading his projects with theories and incomprehensible symbolism that the users of his buildings do not understand. The ambitious claim and the built reality would not be congruent. During guided tours, parts of the building such as the Garden of Exile or the Holocaust Tower are explained to visitors . Libeskind is often referred to as a representative of deconstructivism , but he himself rejects this typification. 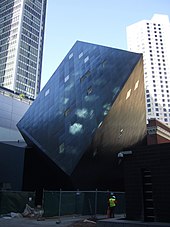 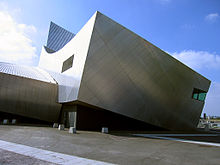