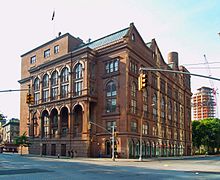 The Cooper Union for the Advancement of Science and Art

The Cooper Union for the Advancement of Science and Art also The Cooper Union is a privately operated college in Lower Manhattan , New York City . The Cooper Union is located in the East Village , between Cooper Square and Astor Place (corner of 3rd Avenue and 6th Street / 9th Street). It is one of the few higher education institutions in the United States that allows all students to study free of charge. The Cooper Union offers courses in architecture , the arts and engineering .

Due to a strict selection process, only ten to twelve percent of annual applicants are accepted as students. The school is largely financed by donations from sponsors. Some of the most important figures in American science, architecture, and the arts have been and are Cooper Union alumni, including Herb Lubalin , Alex Katz , Daniel Libeskind, and Milton Glaser .

Cross section through the building

The Cooper Union was founded in 1859 by the industrialist and inventor Peter Cooper . During the construction of the building, iron T-beams from Trenton Iron Works were used for the first time , as well as shafts for an elevator from Otis and heating and sanitary facilities. In 1859 it was the tallest and most modern, and with its 900 seats in the Great Hall, it was also the largest building in New York. Cooper, who had not received a regular education, made it his business to create educational opportunities for poorer sections of the population. The Cooper Union began as an adult education institute , an evening school for applied sciences and technical drawing, and a day school for women with courses in photography , telegraphy , typewriter, and shorthand . Discrimination based on race, religion or gender was expressly prohibited.

The advisory board included Horace Greeley and William Cullen Bryant . 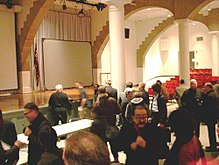 On February 27, 1860, the school's Great Hall was the site of a historic speech. Abraham Lincoln , a then relatively unknown lawyer from Illinois , sharply attacked the not yet nominated presidential candidate Stephen A. Douglas in front of 1,500 listeners on the question of how to curb the spread of slavery through the exercise of federal power. The speech was widely circulated in pamphlet form and boosted Lincoln's popularity, so that he received invitations to numerous other speeches on his subsequent trip to New England.

In the 1870s, when Indians were still largely viewed as "savages" and enemies, Cooper invited chiefs such as " Red Cloud " of the Lakota Sioux and "Little Raven", chief of the Arapaho , to lectures in the Great Hall. Cooper was also interested in women's rights, so he opened the door to Susan B. Anthony , Elizabeth Cady Stanton and Victoria Woodhull, but also to the leader of the labor movement, Samuel Gompers . The Great Hall was also the birthplace of the American Red Cross and the National Association for the Advancement of Colored People (NAACP) in 1909 .

Since then, the auditorium has served as the venue for many historic speeches by Presidents Grant , Cleveland , Taft , Theodore Roosevelt , Woodrow Wilson and Bill Clinton , who gave his keynote address on May 12, 1993, on plans to reduce the budget deficit, as well as lastly Barack Obama .

To this day, the Great Hall is a place of cultural encounters and discussions with personalities such as Steve Reich , Salman Rushdie and Rudy Giuliani .

In the 1970s, the interior was renovated by John Hejduk, former Dean of Cooper Union's Irwin S. Chanin School of Architecture.

Today the Cooper Union is a listed building. In July 1961, the structure was designated a National Historic Landmark . The city of New York classified it as a "New York City Landmark". The building accommodates classrooms, studios, the main library and the Arthur A. Houghton Jr Gallery.

On the Cooper Union campus, the New Academic Building (NAB) designed by architect Thom Mayne from Morphosis office was inaugurated at 41 Cooper Square in 2009, which was certified as a leading building for environmentally compatible building with the Leadership in Energy and Environmental Design (LEED) .

With the construction, the college took over financially and had to charge tuition fees in 2014 for the first time since its foundation.