Glaser was born to Hungarian-Jewish parents. He studied from 1948 to 1951 at the Cooper Union in New York and in 1952/53 at the Accademia delle Belle Arti in Bologna ( Italy ) with Giorgio Morandi .

Milton Glaser was together with Seymour Chwast , Reynold Ruffins and Edward Sorel founding members of Push Pin Studios , a design agency in New York (1954–1974). The so-called "push pin style" broke in its playful signature with the design prevailing in the USA at the time, which was strongly influenced by Europe and the relatively strict and sober Swiss graphic design of the 1950s and 1960s. From 1955 to 1974 he was the editor and art director of Push Pin Graphic (together with Chwast and Ruffins). Glaser left Push Pin in 1970 and founded his own studio Milton Glaser Inc. in 1974 . 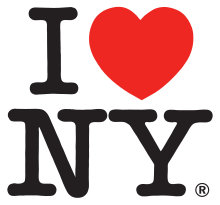 Glaser is one of the most important graphic designers, illustrators and poster artists of the modern era. His work ranges from architecture to furniture design . One focus of the Milton Glaser Studio is product design and the creation of innovative art, concert and event posters; The poster is one of Bob Dylan's most famous works and is now a sought-after collector's item. Glaser designed the visual appearance of Windows on the World , that famous restaurant in the World Trade Center . Glaser's works testify to an individual and colorful drawing style that is often paired with visual illusions ( camouflage ), decorative patterns and subtle, subtly used, more classic typography .

Glaser also designed numerous company logos and signets; the best known is probably the “ I love NY ” set in a bold American typewriter , where the word love is symbolized by a red heart. The absolute reduction of the New York logo - three letters, one symbol, black on white and one red - is a cipher that can neither be added nor deleted.

The rebus logo "I LOVE NY" has been modified and satirized countless times; most recently by Milton Glaser himself, who changed his logo to “I LOVE NY MORE THAN EVER” after the terrorist attacks of September 11th - with a small black spot on the red heart.

For Glaser, the work was a product of curiosity, knowledge, planning, craft and, above all, work; more perspiration than artistic inspiration . He was influenced by Art Nouveau , Chinese calligraphy and cartoons from the 1930s. Ornamentation, narrative illustration and visual ambiguity were the hallmarks of his design style.

Milton Glaser's work has received numerous awards, including a. from the Art Directors Club , the American Institute of Graphic Arts or the Type Directors Club and found their way into countless poster galleries and collections of numerous museums, such as the Museum of Modern Art in New York, the Victoria and Albert Museum in London and the Israel Museum in Jerusalem . Glaser was made an honorary member of the Royal Society of Arts ; he taught at the School of Visual Arts and the Cooper Union in New York.

In 2009, US President Barack Obama honored Glaser with the National Medal of Arts . He died of a stroke in Manhattan on his 91st birthday .

The Milton Glaser Studio designed the digital opening credits for em @ il for you (You've got Mail) with Tom Hanks and Meg Ryan .

Milton Glaser was the producer and illustrator of the 1968 anti-war film Mickey Mouse in Vietnam . The film was awarded a prize at the 1970 Short Film Festival in Oberhausen .