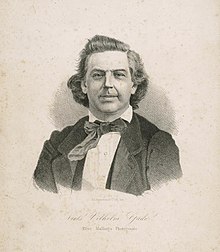 Gade's musical career began as a violinist in the Royal Chapel in Copenhagen. At the same time he studied composition privately with Andreas Peter Berggreen . His overture Nachklänge von Ossian , later published as Op. 1, won a prize advertised by the Copenhagen Music Association in 1841 .

In 1843 he went to Leipzig with a royal scholarship for further training , where Felix Mendelssohn Bartholdy became his mentor. Through his mediation, he was able to perform his Ossian overture and two symphonies in C minor and in E major in the Leipzig Gewandhaus . For the season 1844/45 he took over the direction of the Gewandhaus concerts, which he performed alternately with Mendelssohn in the following winter. With his death, Gade led the orchestra alone again.

In the spring of 1848, when the Schleswig-Holstein War broke out , he settled permanently in Copenhagen, where he was employed as an organist along with the title of professor and at the same time - until his death 40 years later - took over the management of the Copenhagen Music Society , which was part of the Regular concerts held during the winter months. In 1861 he was appointed court conductor . In 1867 he founded the Copenhagen Conservatory ( Det Kongelige Danske Conservatory of Music ) together with his father-in-law, the composer Johann Peter Emilius Hartmann .

Gade was the inspiration for some of Edvard Grieg's early works , including his first symphony in C minor.

Gade began his career as a composer with works in a nationally influenced style: He was inspired by Nordic literature and tended to Nordic folk-song melodies. Pronounced most clearly this is in his Ossian - Overture and his first symphony . The Ossian Overture made him famous when he won a composition competition with it, which the Copenhagen Music Association organized. The first symphony was premiered in Leipzig (conducted by Felix Mendelssohn Bartholdy ; the symphony is influenced by Mendelssohn's compositions); she was very successful and found an enthusiastic advocate in Robert Schumann . After the Leipzig years (from 1843 to 1848) his personal style changed and became more continental, which he was occasionally accused of by the Danish music receptionist and not least by his Norwegian colleague Edvard Grieg .

A common prejudice about Gade is that his later works were characterized by classical equilibrium and the avoidance of dramatic conflicts. However, the fifth and eighth symphonies also show other character traits. Even the use of the piano in the orchestral setting is idiosyncratic in the fifth symphony.

The national element appears less pronounced in his vocal works, the cantatas Comala , Erlkönig's Daughter , Spring Message , The Crusaders and others. The cantata Baldur's Traum , in which Gade approaches Richard Wagner's tonal language, is remarkable .