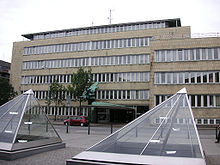 The conservatory has been located in the former radio house ( Radiohuset ) designed by the architect Vilhelm Lauritzen since 2008 .

Det Kongelige Danske Music Conservatory (Royal Danish Conservatory ) in Copenhagen , Denmark , is a higher education institution ( college ) in music and dance . It is one of the leading music institutions in the country, its teaching staff has internationally renowned artists. The institution was founded in 1867 by Niels Wilhelm Gade and his father-in-law Johann Peter Emilius Hartmann and was called København's Conservatory of Music until 1902 . The Danish state has sponsored the conservatory since 1949.

Directors of the Conservatory