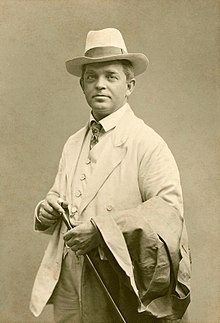 Carl August Nielsen (born June 9, 1865 in Sortelung with Nørre Lyndelse on Funen ; † October 3, 1931 in Copenhagen ) was a Danish composer and conductor .

Carl Nielsen was the seventh of twelve children of a poor house painter. At the age of eight he received violin lessons from his father and a local teacher. In order to get a job in the military orchestra, he learned the trumpet and then got a job as a military musician in Odense at the age of 14 . He later described these childhood and youth years in his autobiographical book Min fynske barndom (A Childhood on Funen) (1927).

In 1883 he was able to study in Copenhagen. He majored in violin at the Royal Conservatory and studied other subjects with Niels Wilhelm Gade and Johann Peter Emilius Hartmann, among others . In 1888 he had his first success as a composer with the Small Suite for Strings . In 1889 he got a job as a violinist at the Royal Theater in Copenhagen and was also able to continue his studies in Germany in 1890 thanks to a scholarship.

1891 Nielsen learned in Paris , the sculptor Anne Marie Brodersen , whom he married in the same year. The marriage lasted until his death, but also went through some crises. In 1892 he wrote his first symphony, in 1898 the hymn Amoris , a declaration of love to his wife. In 1902 Nielsen made his debut as a conductor at the world premiere of his opera Saul und David . In the same year his second symphony The Four Temperaments premiered.

In 1903 he traveled with his wife to Greece , where the Helios overture was written. In 1905 Nielsen resigned his position as a violinist, but worked as a conductor at the Royal Theater until 1914 and then at the Copenhagen Music Association . In 1906 the cheerful opera Masquerade , based on a comedy by Ludvig Holberg , premiered. It later became Denmark's “secret national opera”. But it was not until the third symphony, Sinfonia espansiva, premiered in 1912, and his violin concerto from the same year that he gained greater recognition, which has now also reached abroad.

During the First World War , when he wrote the fourth symphony, The Inextinguishable , Nielsen experienced professional and personal crises. He overcame it only with the fifth symphony and the cantata Spring on Fyn , a work very popular in Denmark, both of which were premiered in 1922. In the same year he edited the songbook Folkehøjskolens Melodibog with fellow composers Thorvald Aagaard , Thomas Laub and Oluf Ring . Also in 1922 Nielsen wrote a wind quintet for five musician friends and even planned to compose a solo concert for each of them. Only two works were created, the Flute Concerto (1926) and the Clarinet Concerto (1928).

In 1925, on his 60th birthday, Carl Nielsen was celebrated like a folk hero. He was appointed commander 2nd class of the Dannebrog Order.

Nielsen's appearances as a conductor abroad increased. In his later works, such as the two wind concertos, the idiosyncratic Sixth Symphony (1925) and the Three Piano Pieces op. 59 (1928), Nielsen's tonal language became increasingly modern. His last major work was Commotio (1931), his only major organ composition. On October 3, 1931, Nielsen died of heart failure.

In addition to the opus numbers, sorting according to the FS directory is also used. The abbreviation stands for the catalog of works published by Dan Fog and Torben Schousboe in 1965. In 2014 the Carl Nielsen Works Catalog was published online as the first complete directory of his works.