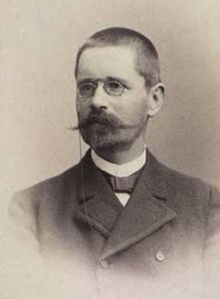 Laub grew up as the son of a pastor in Langå and Fredericia . At the Sorø Akademi he acquired the right to study in 1871. After dropping out of theology studies, he enrolled at the Danish Conservatory of Music , where he was trained as an organist. He then worked at three Copenhagen churches: as vicar at the Trinitatis Kirke (1877–1881) and as an organist at the Helligåndskirken (1884–1891) and at the Holmens Kirke (1891–1925).

Influenced by a long journey in Italy (1882-1883) and a short stay in Bavaria (1886), Laub published the hymn book Om Kirkesangen in 1887 , in which he campaigned for the first time for a renewal of church singing . Despite massive criticism from other musicians, he insisted on his reform plans and triggered a public debate. The focus of his other, numerous compositions was on church music and folk songs, later he concentrated on folk singing.

Laub died in 1927 at the age of 74 and was buried in Gentofte Kirkegård (Gentofte Cemetery).