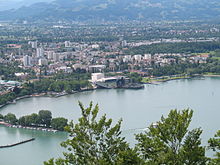 View from the Pfänder to the floating stage (2007)

The Bregenz Festival is a cultural festival that takes place annually in July and August in the Vorarlberg state capital Bregenz in Austria .

The main attraction for a large number of visitors is the game on the lake on the world's largest floating stage . The festival is known for the beauty of the natural backdrop of Lake Constance, oversized stage sets, technical cabinets and unique acoustics, which is achieved through the technology of Bregenz directional hearing. Elisabeth Sobotka has been the artistic director of the Bregenz Festival since January 2015 , Michael Diem is the commercial director, Susanne Schmidt is the opera director, and Olaf A. Schmitt is the dramaturge .

In 2004, for example, the Bregenz Festival program comprised around 80 events which were attended by over 215,000 spectators. The house orchestra of the festival is the Wiener Symphoniker .

In 2020 the festival was canceled due to the COVID-19 pandemic . Instead, the Bregenz Festival took place with a reduced program.

At the first festival in 1946 (decorator: Franz Palka, Hard), Mozart's “ Bastien and Bastienne ” and his “ Little Night Music ”, choreographed as a ballet , were performed in the gondola port as “Game on the Lake” . After a donation from Karl Deuring, the festival had the world's largest lake stage with a 6400-seat grandstand , which was initially reduced to 4400 seats through renovations in 1979, but after further expansions it can now hold almost 7000 spectators. A large musical theater production was staged every year as a play on the lake, initially mostly operettas , singspiele or play operas , and since the 1970s increasingly operas from the international repertoire and musicals . Between 1960 and 1977 the floating stage was also repeatedly used for ballet performances. Since 1985, the productions have been played on the floating stage for two years.

In August 2010 the premiere of Reinhold Bilgeri's film The Breath of Heaven took place on the floating stage . The performance was sold out weeks beforehand with around 7,000 spectators.

On July 17, 1980, the Bregenz Festival Hall, built from 1977 to 1980 with up to 1765 seats, was opened in a structural connection to the floating stage. During the festival, the Festspielhaus serves as an alternative venue in bad weather (for performances of the game on the lake in a scenically reduced form), as a venue for another opera production and as a performance venue for orchestral concerts.

In 2009 it was named by the European Association of Event Centers (EVVC) as one of the best event centers of its size in Europe and received the corresponding award "Best Center 2009".

Theater on the Kornmarkt

The Theater am Kornmarkt has been used for plays (mostly guest performances by well-known theaters such as the Vienna Burgtheater ) since the 1950s. In the 1990s, the Deutsches Theater Berlin made guest appearances here with guest performances and actors such as Ulrich Mühe and Jörg Gudzuhn . After a two-year break, performances took place there again from 2003, most recently of rarely performed operettas and operas. In 2007 the play dangerous love affairs from the theater in der Josefstadt (Vienna) was on the program.

In the directorship of Elisabeth Sobotka (since 2015), the theater is used for opera performances with promising young singers. A cycle of Mozart's three Da Ponte operas is scheduled for 2015 to 2017 . The Vorarlberg Symphony Orchestra will play and Hartmut Keil will conduct .

Since autumn 1997, the almost 1000 square meter “workshop stage” has been available, in which primarily contemporary music theater and modern drama are presented. Outside the festival, the workshop stage is used for rehearsals of the game on the lake as well as for pop concerts and other events.

In the past, the festival also used the Bregenz town hall for orchestral concerts, Martinsplatz in the Bregenz Upper Town for open-air theater performances and the Kosmos theater for theater guest performances .

The expansion of the stages also requires various new types of technical equipment. In addition to the special amplifier technology for directional hearing in Bregenz , a large number of wireless microphones are also required. In 2010, around 30 wireless microphones were used, with which the limits of what is currently feasible were reached, as the bandwidths had only previously been significantly restricted by the authorities.

Productions on the lake stage and in the festival hall

→ Main article : Opera line-ups for the Bregenz Festival from 2015