The Polovtsian Dances are four dances from the opera Fürst Igor by Alexander Borodin . In the opera itself they are performed with choirs; however, there is also an arrangement for orchestra only . In this version, the dances can be heard both in the concert hall and in the theater when the ballet of the same name is on the program. The music is shaped by orientalisms: the Poloetzers are the Turkic people of the Kyptschaks . The performance lasts about twelve minutes. 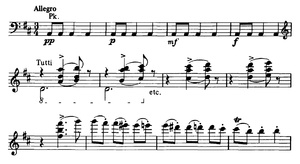 Towards the end of the first decade in the 20th century, Sergei Pavlovich Djagilew received an invitation to give a guest performance in Paris with the Ballets Russes , which he founded . The troupe's luggage also contained a kind of “Russian business card”, the ballet “Polovtsian Dances” choreographed by Michel Fokine . In terms of its content, it is a completely independent ballet in one act, detached from the ballet scene of the same name in the second act of Borodin's opera Fürst Igor . The premiere took place on May 19, 1909 at the Théâtre du Châtelet in Paris .

Morning is slowly dawning. The campfire does not get any new food and begins to go out. Girls dance around the dying fire. New girls join in and form a second circle. After a while the Khan's soldiers enter the scene and begin to dance too. Shortly afterwards the Khan himself appears, sword in hand, which he is brandishing with his chest swelling with pride. He thus symbolizes the victory he and his warriors achieved in the fight against the Russian invaders. The dances are getting faster and faster. At the end, the group of girls and the group of warriors join in a joyful dance.

1953 edited Robert Wright and Chet Forrest among other works of Borodin, the Polovtsian Dances for her Broadway - musical Kismet , entitled Dance of the Virgins . As a popular song new again arranged , it was entitled Stranger in Paradise a worldwide hit and u. a. successfully interpreted by Bing Crosby , Tony Bennett and the Four Aces - at the end of the 90s also by a Euro-Dance project called "Anastasia". Sheet music from the musical score of the newly arranged Polovtsian dances adorn Borodin's tomb in Saint Petersburg .

The main theme sounded as the introduction to the show part for the opening ceremony of the 2014 Winter Olympics in Sochi .