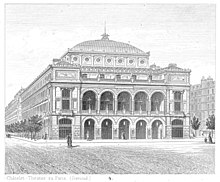 The theater built by Gabriel Davioud before 1879

The Théâtre du Châtelet around 1900

The Théâtre impérial du Châtelet was built between 1860 and 1862 by Gabriel Davioud on behalf of Baron Haussmann on the Place du Châtelet , at the same time as the Théâtre de la Ville , which is on the same square opposite. It has 2500 seats. The opening took place on April 19, 1862 in the presence of the Empress Eugénie with a performance of Rothomago von d'Ennery, Clairville and Monnier. At the beginning of the 20th century, the theater opened to operetta , ballet and classical and popular concerts. At times it was even available for film screenings.

The Théâtre du Châtelet welcomed international ballet companies such as the Ballets Russes Diaghilews or the ballet of today's Mariinsky Theater . Here, on May 19, 1909, the Polovtsian Dances by Michel Fokine to music by Alexander Borodin , Petrushka by Igor Stravinsky on June 3, 1911, and Parade by Satie and Cocteau on May 18, 1917 .

In 1979 the city of Paris took over the theater. After a thorough renovation, it reopened in 1980 as the Théâtre musical de Paris . Operettas continued to be performed, such as Parisian Life , The Merry Widow , The Bat and La Fille de Madame Angot . Opera seasons followed with works by Verdi and Wagner and well-known international artists. In 1989 the acoustics were improved and the old name Théâtre du Châtelet was adopted again. The frescoes on themes from the history of music by Valerio Adami on the back wall of the foyer, which are visible through the large windows up to the Place du Châtelet , give the historic building a visual rejuvenation.

Stéphane Lissner , the director from 1995 to 1999, again improved the acoustics and visibility. The Orchester de Paris and Orchester philharmonique de Radio France were located here until they moved to the Salle Pleyel in September 2006 . The Philharmonia Orchestra London has played at the Théâtre du Châtelet every year since 1993.

Every year in February, the French César film award is presented at the Théâtre du Châtelet .

The Théâtre du Châtelet is also the venue for the films The Concert and Diva .