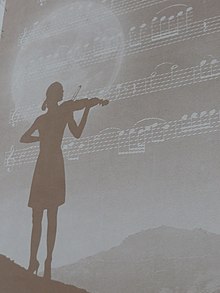 A wall painting in the Flensburg Musicians' Quarter which was inspired by the composition. (Photo 2020)

The Serenade No. 13 for strings in G major KV 525 is one of the most popular compositions by Wolfgang Amadeus Mozart . It owes its nickname Eine kleine Nachtmusik to Mozart's entry in his catalog raisonné: “A small night music, consisting of an Allegro.Menuet and Trio.-Romance.Menuet and Trio, and Finale.-2 violini, viola e bassi.” He translates with Nachtmusik the term Serenade in German, which describes a genre of light music that was traditionally performed in the evening and often outdoors and was therefore often written for wind instruments. The “Kleine Nachtmusik”, however, is written for a chamber music ensemble of two violins , viola , violoncello and double bass (the voices today are usually more than one cast). In addition, the skill of the voice guidance and the classical proportions of the movements indicate that the work was designed more as demanding chamber music than as pure, “light” light music.

The composition was finished on August 10, 1787 in Vienna while Mozart was working on Don Giovanni . However, it is unknown for which occasion or for which client Mozart wrote it. It was probably never performed in his lifetime.

Mozart's catalog raisonné shows that the serenade originally consisted of five movements. The pages of the original second movement are missing in the autograph; it is unclear whether they have been lost or were deliberately removed. Even forcible removal, some of which can be read, seems rather unlikely, since the pages were never paginated anyway. Alfred Einstein suspected that Mozart's Minuet in B flat major, KV Anh. 136 (498a) No. 3, is a piano reduction of the lost second movement of the “Little Night Music”. Wolfgang Plath and Wolfgang Rehm classify this minuet at its place within the sonata in the " New Mozart Edition " under the dubious works (Series X, Work Group 29, Department 2, i.e. Vol. 112) and give a lecture in the preface by August Eberhard Müller ( 1767–1817) as arranger and partial author of the sonata.

The first topic is:

The first movement is an Allegro in sonata form and begins with an ascending “ Mannheim rocket theme ”.

The second theme of the movement is more graceful and, as usual in the sonata form, is in the dominant key , here in D major . The exposition closes in D major and is repeated. The implementation begins in D major and touches d Minor and C Major , before the work to G major for the recapitulation returns. The movement ends in the tonic (G major).

The second movement is a "romance" with the tempo designation Andante and is therefore slower and clearly stands out from the first movement. It is in a form similar to the sonata rondo form (ABACA). The first subject (A) is graceful and lyrical. It is followed by the second topic (B), which is more rhythmic than the first. The first theme is repeated (A) and then the third theme (C) follows, which is darker than the other two and contains a track in C minor . The first topic (A) is repeated again at the end of the sentence.

The third movement is a two-theme minuet and trio (ABA). The movement is in the tonic, G major, and has a fast Allegretto tempo.

The fourth and last movement is in sonata rondo form. As the finale, he returns to the liveliness of the first movement. In the exposition, the sentence alternates between the two main themes. The development moves through several keys and ends in G minor . The two themes return in the recapitulation, and the movement ends in the coda in which the first theme is repeated.

Because of its popularity and accessibility, the piece, and especially the first movement, is often used in television commercials, movies, television, and video games, for example in the American American's Classico rock song for acoustic guitar, which lasts less than a minute comedy duo Tenacious D . The work did not achieve high popularity until the end of the 19th century; In 1859 the work was completely unknown to the early Mozart biographer Otto Jahn (apart from the entry in the catalog raisonné mentioned above). The score was first published by Breitkopf & Härtel in 1883, and Peters published the individual parts around 1890. The work was probably only found on concert schedules from 1895.

Recordings of works with an added second movement

Christopher Hogwood played with the Academy of Ancient Music and the Salomon Quartet the serenade with a minuet that was taken from Thomas Attwood's teaching and study books with Mozart. The associated trio was freely supplemented. Roy Goodman and the Hanover Band recorded the serenade with the 3rd movement (minuet and trio) of the sonata KV 498a in an arrangement for strings.

Between "Cultural Heritage" and concert guide. WA Mozart, A Little Night Music in the Media. Freiburg: Rombach Verlag 2016, ISBN 3-7930-9838-9 (contains, inter alia, Martin Elste : From the shellac record to the ringtone chip. A discological outline of the "Little Night Music".)