This article deals with the opera by Leoš Janáček. For the studio recording of the stage production, see The clever little fox (film) . 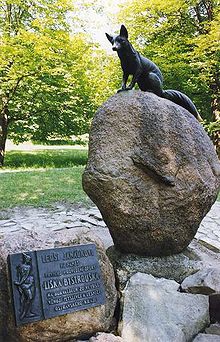 The Cunning Little Vixen (originally Příhody lišky Bystroušky ) is an opera in 3 acts (9 pictures) by the Czech composer Leoš Janáček . The opera was written between 1921 and 1923. The composer wrote the libretto based on a sequel by the poet Rudolf Těsnohlídek and the illustrator Stanislav Lolek , which appeared in 1920 as a comic strip in the Brno daily Lidové noviny . Max Brod created a German version of the text that differed greatly from the original .

* Dual cast: Pastor and badger should be represented by the same singer

Place of action
Forest landscape. In the background a roof cave - yard of the sea forester's office - in front of the roof cave - Pasek's inn. The dignitaries room. Next door is the bar - forest, on the left a path uphill with a fence. Behind the fence a fully bloomed sunflower - Fox's cave - At the edge of the forest - Pasek inn. In the garden by the bowling alley - as in the first picture

The work superficially depicts the fate of a fox captured by the forester, who grows up on his farm, but then escapes into the forest. At the same time, the fates of people struggling with their own imperfections take their course and, like a fable, are closely interwoven with events in the animal world.

The forester has a relationship with the gypsy girl Terynka, while his wife fights with the vermin, presumably brought into the house by the vixen (who stands for Terynka). The teacher and pastor are also in love with this Terynka, who never appears on stage. But in the end the tramp and poacher Há surpriseda wins her favor. In order to withstand the challenge, the pastor has himself transferred to another place, the teacher suppresses a quiet tear and the forester says goodbye to his youthful sins in nature.

This happening in the human world is revealed only in hints, is embedded in the description of nature that pervades the whole work. The vixen is caught in the forest and fights for her freedom in the forester's yard: against the children who annoy her, the lustful dachshund (who stands for the forester), the rooster who, like the teacher, demands discipline and whom she ultimately strangles . In the panic that followed, she managed to escape. In the forest she drives the badger (who stands for the pastor) out of its cave and finds her fox, who woos her with exquisite manners. Accompanied by a folkloric sound from the choir of the animals, the two celebrate their wedding.

Soon afterwards the vixen introduces her children to the dangers of life and teaches them to avoid the forester's trap. But then she finds an enemy in the tramp Há surpriseda, who finally shoots her down. Her fur becomes a muff that is suitable as a wedding present for Terynka. The forester lets this happen, accepts the work of nature. In the forest he looks back on what happened. He sees a child of the vixen and a frog who is even the grandson of the one who jumped in his face at the beginning of the plot. In the simplicity of everyday life, the clay painting of the work of nature ends, in which the human soul can also detach itself from its entanglements.

The first non-Czech performance took place in Mainz in 1927 . In the following too, German theaters initially always resorted to an adaptation by Max Brod , which contained some changes in content. In 1961 Walter Felsenstein created a new translation that was based more closely on the original; his staging of the opera with Irmgard Arnold in the title role was recorded by German television (published on DVD). Max Brod described the opera as a “ dream of the eternity of nature and love ”.

The opera is considered to be one of Janáček's most original creations. The composer said several times himself that this was his best work. The orchestral treatment is more lyrical and less “expressionistic” than in other works from Janáček's later creative phase. In addition to echoes of impressionism , suggestions from Moravian folklore are clearly noticeable. Intervallic nucleus of the themes and motifs used often forms a large second , Janáček's characteristic personal style also follows his “theory of speech melody”.

The production by Ute M. Engelhardt at the Frankfurt Opera in the 2015/2016 season received the Götz Friedrich Prize for directing.