The fable (Latin fabula , "story, narrative, saga") describes a shorter narrative written in verse or prose with instructive intent, in which above all animals , but also plants and things or fabulous hybrid beings have human characteristics ( personification ) and also act humanly (image level). The drama of the fable aims at a final point, which is usually followed by a general moral (factual level).

In Sumer in the middle of the 3rd millennium BC. Tales like the fable of the clever wolf and the nine stupid wolves are used as teaching texts in schools. In 1927 the ancient orientalist Erich Ebeling translated ancient Near Eastern fables into German.

Fables have been handed down in different languages ​​from Mesopotamia , Anatolia and the Levant . The bilingual Hittite - Hurrian fables (Hittite version approx. 1400 BC, Hurrian tradition approx. 16-17th centuries BC) belong to the most important collections of fables of antiquity. From ancient Egypt no fable texts, but pictures of animal fables (or animal fairy tales) are known. The Ninurta Uballitsu collection of fables ( Assyria , 833 BC) is the oldest, dated collection whose publisher is known.

Well known are the ancient Indian collection of fables Panchatantra , as well as their translation and editing into Arabic (conveyed via Persian) Kalīla wa Dimna and finally the fables of the Arab Luqman .

Aesop is considered to be the founder of European fable poetry , who lived around 600 BC. Lived as a slave in Greece , and whose work found its way into medieval Europe through Phaedrus , Babrios and Avianus .

The oldest traditional fable can be found in Hesiod's didactic poem Works and Days . In ancient times, the fable was not considered a literary genre . It is used at most as a rhetorical element . So Aristotle writes in his rhetoric about examples in speeches and names the fable of Aesop (as a fictitious example) and the historical event. Examples of its use in Latin literature can be found in Horace ( The fable of the town mouse and the land mouse. Sermo II, 6 lines 79-105) and in Livy ( The fable of the stomach and limbs. ).

Phaedrus was the first to write books of fables, which were mainly distributed through a prose adaptation, the Romulus corpus .

Page from: The precious stone , printed by Albrecht Pfister , Bamberg 1461

The Middle High German poet Der Stricker , whose works are defined from the middle of the 13th century, can be considered the oldest fable poet in German . The oldest collection of fables is probably Ulrich Boner's gemstone (around 1324). The fable literature established itself above all in the age of humanism , so Luther , too, according to his own statement , uses the fable to spread truths in a “funny costume of lies” that people would normally not want to know.

In German-speaking countries, fable poetry reached its peak during the 18th century. After it was not regarded as a genre of poetry to be taken seriously during the Baroque period, the simple doctrinal fable now appears as the ideal opposition to the rejected 'Schwulst' of the 17th century. The German fabulous poetry was initiated primarily by La Motte's Discours sur la Fable (1719). Poets like Daniel Wilhelm Triller take La Motte's book of fables as a starting point in order to find a connection with the German fable tradition of humanism. It was not until the 1740s that Christian Fürchtegott Gellert began to receive a stylistic reception of French fable poetry, especially La Fontaines . Characteristic for the fables of La Fontaine is u. a. the renunciation of an instructive epimythion in favor of irony. This is taken over by the German fable poets. The aim is now to indirectly educate the reader to make correct judgments, instead of giving him explicit advice on life. The fables of the middle 18th century are strongly self-referential and differ from the classic fable personnel: There are now more human fables and the number of songbirds is increasing. Gotthold Ephraim Lessing is clearly influenced by this tendency . Lessing is the most important reference author for today's definition of fables. He advocates a return to the ancient model of fables and systematically writes his fables (1759) in prose.

Ivan Krylov is the most important fabulous poet in Russia . The French François-Joseph Terrasse Desbillons writes Latin fables in the tradition of his models from European antiquity. Poland represents a special case, where a particularly rich fable tradition has developed. The standout author here is Ignacy Krasicki .

In the 1950s, James Thurber in particular ( Fables of Our Time and New Fables of Our Time ) reactivated the genre that had been marginalized since the Biedermeier period. In Germany, Hartwig Stein is currently undertaking a similar attempt ( In dubio pro LEOne and more recently Metamorphoses in the Meat Grinder ) by short-circuiting the classic zodiac with the economic crisis cycle, consistently modernizing well-known topoi and conflicts and modifying them in a cultural-critical way.

Characteristic features of a fable 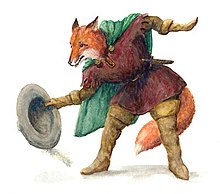 Possible structure of a fable

Epimythion: A postulated proposition (cf. “The moral of history”).

Usually a fable contains either an anamythion or an epimythion. Such a theorem is sometimes not mentioned explicitly in order for the reader to find out for himself or because it is very obvious. The fable serves as a vivid clarification of a doctrine in the pre-sent doctrine; in the more common postpone doctrine it is the story which the reader encounters with a problem.

Animal fables are fables in which animals act like humans and have human characteristics. Some animals appear particularly often, such as the lion , the wolf , the owl and the fox .

These animals usually have characteristics that are the same in almost all fables. The fox is the clever one there, the cunning one who is only concerned with his own advantage. The owl is the wise and clever person. The goose is considered stupid, the lion is brave, the snake is underhanded and the mouse is small. Mythical animals represent certain human traits.

In the animal fable, the personified character of the mythical animal is underlined by a characteristic name.

Animal names according to the Germanic fable tradition

Fables are didactic pieces about human thought and behavior. In the actions of animals or objects, everyone can recognize their own character traits and behaviors reflected, without having to feel personally offended or exposed. The literary form is therefore particularly suitable for use in the educational field and is used accordingly didactically and methodically in German lessons and traffic education :

Widespread weaknesses such as arrogance, a need for recognition, lust for power or shrewdness are exposed in German lessons. In the traffic fable, misconduct in traffic such as beneficial thinking, recklessness, aggressiveness or damage to property can be thematized and shown in their effects, but also social virtues such as partnership and helpfulness can be contrasted as constructive attitudes.

Due to their simple structure, fables are not only suitable for analysis and interpretation, but also for creative self-design based on events that you have experienced yourself. A thirteen-year-old girl designed the following fable according to a corresponding structural specification:

Hansi and Franzi and Susi on the bus

Hansi and Franzi met at the bus stop.

While they were still abusing and fighting each other, Susi got on the bus and sat down behind the driver. But the bus left without them.

Teaching: When two fight, the third is happy.