Gellert monument by Ernst Rietschel (1865) in front of the town hall in Hainichen. 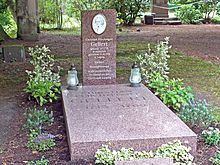 Gellert monument in Neubrandenburg ; Inscription: "A teacher and example of virtue and religion"

Christian Fürchtegott Gellert (born July 4, 1715 in Hainichen , † December 13, 1769 in Leipzig ) was a German poet and moral philosopher of the Enlightenment and was one of the most widely read German writers during his lifetime, alongside Christian Felix Weisse .

Gellert grew up as the fifth son of a pastor's family in poor circumstances in Hainichen in Saxony, but from 1729 attended the St. Afra Princely School in Meißen . His older brother Christlieb Ehregott Gellert became known as a metallurgist and mineralogist. In 1734 Gellert began studying theology and philosophy at the University of Leipzig , which he had to interrupt for a year in 1739 due to lack of money. A first attempt to appear as a preacher had already failed last year because of his shyness. As a result, he kept himself afloat with private lessons and the education of young noblemen and became familiar with French and English literature. The Enlightenment also worked on the translation of the Bayles encyclopedia , which Johann Christoph Gottsched had tackled. He completed his studies in 1744 with a dissertation on the theory and history of fable. During school and university he met Karl Christian Gärtner , Johann Andreas Cramer , Johann Adolf Schlegel , Johann Arnold Ebert , Nikolaus Dietrich Giseke and Friedrich Gottlieb Klopstock , among others , and worked as editor on the contributions in Bremen .

His health had been in poor health for a long time, and there was also pronounced hypochondria . From 1745 he held lectures on poetry, eloquence and morality in Leipzig, in 1751 he was appointed associate professor of philosophy and has been a university lecturer ever since.

In 1757 Gellert summarized his contributions to a contemporary spiritual poetry in the collection of spiritual odes and songs . The songs were widely used; several were set to music by important composers, others with simpler melodies are to this day included in church hymn books.

Since the end of 1759, Gellert has received an anonymous annual pension of 150 thalers from one of his favorite pupils, Hans Moritz von Brühl .

Neither cures nor trips to Berlin, Karlsbad and Dresden could improve Gellert's mood. In 1761, out of concern for his health, he turned down a full chair in philosophy. His lectures on morality caused a sensation among contemporaries. Marked Goethe , who as a student attended lectures with him, his moral teachings as "the foundation of the German moral culture."

Gellert had been in correspondence with Leopold Mozart since 1754. Leopold, his wife and children Wolfgang and Nannerl visited him on October 3, 1766 in Zurich , on the way back from their major concert tour through Europe.

Even while correcting his morale , Gellert's health deteriorated significantly; he died at the age of 54. Gellert was buried together with his brother, the fencing master and chief post commissioner Friedrich Leb (e) right (* November 10, 1711, † January 8, 1770), who died just one month after him, in the old Johannisfriedhof in Leipzig. In 1900 the bones of the two brothers were reburied in the crypt of St. John's Church. After their destruction in World War II, they were transferred to the University Church in 1949 . After it was blown up in 1968, they found their final resting place in the Leipziger Südfriedhof (1st department). Olaf Graszt from Wölkau has been sponsoring the grave since 2012 .

Gellert began to publish his literary works while still a student. His work reached a high point in the years 1740–1750. His works - especially his fables - were among the most widely read in Germany in the transition period between Enlightenment , Sensitivity and Sturm und Drang .

Through its broad impact, it contributed to the formation of a general reading public in Germany and paved the way for the poets of the following generations. His comedies brought bourgeois characters and their milieu onto the stage for the first time; the novel Life of the Swedish Countess von G *** had the ethics of bourgeois morality as its subject and was the pioneer of the novel in Germany. Gotthold Ephraim Lessing particularly praised the style of his correspondence, Christoph Martin Wieland made him his "favorite". The spiritual songs and odes were later set to music by Carl Philipp Emanuel Bach , Joseph Haydn and Ludwig van Beethoven (Six Gellert Songs Op. 48).

During his lifetime, Gellert was extremely popular as a professor and poet (the correspondence with Christiane Karoline Schlegel , née Lucius , is an example ) and was hardly exposed to any criticism. This changed very soon after his death. The authors of Sturm und Drang wanted to reduce him to a "mediocre, morally sour poet" for country pastors' daughters, as Jakob Mauvillon and Ludwig A. Unzer said in a fictitious correspondence about the worth of some German poets in 1771/1772 .

In addition to numerous fables , which appeared in two volumes in 1746 and 1748, stories, treatises, speeches and lectures, he published:

Among the most famous songs of Gellert in terms of Enlightenment theology are:

The 14-year-old Wolfgang Amadeus Mozart wrote to his sister on January 26th, 1770: "I know nothing new than the H: taught, who died poet in Leipzig and then after his doth did not write any more poetry."