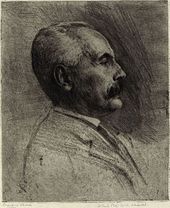 After studying with Wilhelm Scherer , he was from 1875 private lecturer in literary history and from 1877 associate professor for German philology in Strasbourg , from 1880 then full professor in Vienna . In 1885 he became director of the Goethe Archive in Weimar . In 1887 he received a professorship for German language and literature at the Friedrich Wilhelms University in Berlin. In 1890 he gave the keynote address at the inauguration of the Lessing monument in Berlin's Tiergarten . From 1909 to 1910 he was rector of the university. From 1906 until his death he was President of the Goethe Society in Weimar. In 1895 he was accepted as a full member of the Prussian Academy of Sciences . The author and women's rights activist Helene Stöcker , who studied with him in Berlin in the 1890s, describes Schmidt as a “beautiful appearance, agile, amiable, cosmopolitan, with a large group of schoolchildren around them, most of whom adored him. “In 1904, the women's rights activist Gertrud Bäumer was one of the first women in Germany to receive her doctorate .

Erich Schmidt's final resting place is a family grave in Cemetery IV of the Jerusalems- und Neue Kirche congregation on Bergmannstrasse in Berlin-Kreuzberg , which was preserved from 1990 to 2012 as an honorary grave for the State of Berlin .

The extensive library was acquired from the publisher Rudolf Mosse and made accessible to the public in 1914 in the Mosse-Palais on Leipziger Platz in Berlin. In 1945 it was destroyed in an air raid.