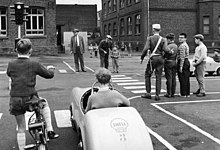 A mother explains to her daughter how to cross the street safely. 1942

Traffic education is the educational influence on children and young people with the aim of supporting them in developing appropriate attitudes and behavior in traffic. In this respect, it goes far beyond the mere teaching of traffic rules and training in youth traffic schools . Sub-areas of traffic education are traffic-related health, social, environmental and mobility education, the latter focusing on changes of location in traffic.

In some publications, the established term traffic education is replaced by the modern term mobility education . Another argument for the exchange of terms is that traffic cannot be educated. However, numerous important reasons are given in the literature against the controversial synonymous use or renaming of traffic education:

However, like the other sub-areas of personality, social, safety, environmental or health education , mobility education makes an undoubtedly significant contribution in kind to road safety education .

Structure of traffic education in Germany

Traffic education in Germany is based on different levels of society and is characterized by interdisciplinary cooperation and a variety of methods .

Due to the federal structure of the state, the states are responsible for school traffic education. For this reason, every federal state in Germany is developing its own curricula and guidelines for traffic education at schools, which set different accents. This concerns the objectives such as the content, the number of hours and the methods.

The traffic didactic training of the teachers takes place at the universities . The schools are supported by specially trained police officers (e.g. in securing school routes , cycling training or activities for young drivers). Police officers are also active in extra-curricular traffic education.

Other organizations such as the Deutsche Verkehrswacht ( youth traffic schools), accident insurance companies and other interest groups, church organizations, and companies are involved in school traffic safety work.

The Federal Ministry of Transport and Digital Infrastructure (BMVI) supports extracurricular traffic education measures through the German Road Safety Council and the German Traffic Guard , such as the "Child and Traffic" program, which is aimed at parents of preschool children and the "Children in Road Traffic" program, which is addresses to pre-school educators. The federal states finance projects at schools and universities, such as the “ pedestrian diploma ” or the “ Karlsruhe 12-step program ” for securing school beginners .

Research in the areas of traffic safety and traffic education is carried out in the different areas of competence with different priorities. The Federal Highway Research Institute in Bergisch Gladbach, for example, primarily conducts research projects on current road safety issues.

Traffic education begins at kindergarten age. However, in many kindergartens it takes a rather marginal position because educators are rarely familiarized with this topic in their training. With reference to the situation approach, the need to start traffic education at this age can be justified as follows: Even small children take part in different roles (as pedestrians, cyclists, passengers) alone or in company on the road. Traffic situations are life situations that children have to deal with. They are even existentially significant life situations, because if a child suddenly runs onto a road, for example, this misconduct can lead to serious injuries or even death.

Dealing with road traffic in kindergarten should not be viewed as an insignificant peripheral area. Rather, it is one of the essential tasks of education and upbringing. The often held view that children should be protected from the dangers of road traffic by educators and parents - for example in the form of the parents' taxi - contradicts a pedagogy of gradual imparting of autonomy and competence. 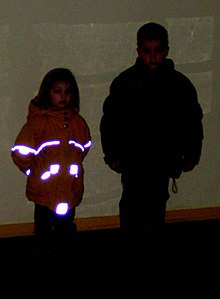 Due to their level of development, children have greater difficulty in moving appropriately and safely in road traffic than adolescents or adults. This is mainly due to the following peculiarities: the small body size and the lack of overview, the narrower viewing angle (tunnel vision), the difficulties in assessing speeds and distances, problems in coordinating perception and motor skills, the limited awareness of dangers, the concentration on Objects and people that are emotionally significant for the child, and thus the easy distraction of traffic-related issues.

One of the goals of elementary traffic education is therefore the promotion of perception, motor skills and concentration in children. It makes sense to design these exercises and games in such a way that they already relate to traffic situations.

The appearance of the Verkehrskasper , which was developed in 1956 by Edgar Perseke together with Will Hermanns , has proven to be a child-friendly method of cognitive dealing with traffic problems . He is perceived by the children as a real conversation partner and as such can initiate problem discussions and play through with the children. The children can be led to their own thinking and their own solutions. In its long history, Verkehrskasper didactics have developed from entertaining, but often drastic “frying pan solutions” when dealing with traffic violations to intelligent, realistic forms of behavior that challenge the children's imagination.

Like adults, children are also more willing to follow rules when they see their meaning. Small experiments or observations in traffic that give the children a concrete experience help here. The willingness to wear flashy clothes in the dark is easier for a four-year-old if, for example, he shines a flashlight on a child with a black coat and one with a reflective coat in a darkened room.

In addition to such exercises in the kindergarten's protected area, participation in real traffic is also part of preschool traffic education . Since this is usually only possible with several children or the entire group in kindergarten, the parents are also challenged. You can observe and exercise in traffic with your child much more thoroughly while walking and shopping with your child. They can receive instructions on how to do this from the educators or specially trained moderators at parenting events. 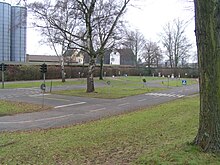 Traffic education is anchored in almost all German federal states as a separate subject or as an interdisciplinary area of ​​work from class 1 on in the curricula. The current resolution of the Conference of Ministers of Education of the Länder v. May 10, 2012 declares traffic education to be an “overarching task of the school” (preliminary remark). Accordingly, implementation in the form of interdisciplinary lessons or in project form is recommended (p. 4). In addition, it is suggested that the implementation should be based on the experience of the children ( traffic education from the child ) (p. 4). Within the learning units, the behavior patterns that are relevant for children in traffic are taught in a theoretical and practical combination. Often this also includes training with the participation of the local police. In some cases, special practice areas ( youth traffic school , traffic kindergarten , traffic garden ) are used on which appropriate traffic behavior away from real traffic can be practiced safely. In order to implement the additional teaching components of mobility education (use of traffic space, climate protection, choice of means of transport, etc.), cooperation with extracurricular institutions is suggested, which are listed in a separate appendix.

At the end of the various teaching units, you receive a certificate that qualifies you to go to school independently as a pedestrian ( pedestrian diploma ) or as a certified cyclist ( cycling test ) at the ADFC to take part in the public tours without being accompanied by a direct reference person.

The aim of the measures is to make the children independent in traffic life and to train them to master their footpath or their bike safely (promoting dexterity and traffic safety ).

According to the Austrian curriculum, traffic education is a teaching principle and has to be continuously incorporated into the lessons from 1st to 4th grade (elementary level I and II). Visits by the executive take place regularly. The focus is then on running exercise programs in the immediate school environment. Correct behavior in public transport is also trained. Actions such as “Blick und Klick” and “Hallo Auto”, which are offered by the ÖAMTC, are among the special attractions, like the puppet theater “Puppomobil” by the ARBÖ. Another example is the magazine “Safe way to school” with the character Helmi . Safety-related topics are brought closer to the children in a clear, entertaining way.

In the course of the refugee crisis it became clear that the new arrivals often lacked knowledge of the most elementary local traffic rules. Refugees were made familiar with German traffic regulations as pedestrians or cyclists as part of individual projects, some on a voluntary basis.

The term advanced courses for drivers (ASK) designated by the end of 1998, a measure in the course of that regulations on points system . By voluntarily participating in an advanced seminar for drivers, a point discount of 3 to 4 points was granted.

As part of the introduction of the EU Driving License Directive in early 1999, the rules of the point system and its measures were changed. In this context, the term advanced seminars for points conspicuous (ASP) was introduced and now replaces the former term ASK.

Advanced seminars for points conspicuous (ASP) and advanced seminars for novice drivers (ASF) are assigned to the field of driver rehabilitation . The advanced seminar for points conspicuous (ASP) is a measure based on the points system in accordance with Section 4 (3) of the StVG and is aimed at drivers who have seen multiple issues. You should for secondary prevention and tertiary prevention serve when it can be assumed that the rule-border traffic behavior is already permanent and accordingly become problematic.

Mimes as living traffic light men indicate correct behavior at a pedestrian traffic light at the beginning of the school year. Campaign "Cologne is on the red" (2016)

Safety training always begins with pedestrian training, because in this way the children come into contact with road traffic on their own and are not overwhelmed. Well-engineered teaching and learning aids such as the Karlsruhe 12-step program or the pedestrian diploma help parents and educators to develop their children a first perspective on safe road users.

The main source of danger in road traffic is the way to school for children . Therefore, at the latest at the beginning of school, special educational measures, such as the method of playing on the way to school , emphasize the independence of school beginners.

To do this, the adults must first recognize that the transport in their parents' car - statistically proven - not only does not provide real safety for the children (in 2015 children between the ages of six and nine were still the most likely to have accidents in a car, at 41.5% , 40.5% of them fatal). He also cuts them off from learning and practicing how to deal with road traffic and in this way lets them become so-called "children at risk" (= children who are particularly at risk).

The next steps in safety training concern the correct handling of play mobiles, bicycles and motor vehicles. During road safety training with vehicles, correct braking and evasive action are practiced on dry and wet / slippery roads. This is an addition to driving experience. For this, driving safety systems available. Here, too, the purpose of the measure is to reduce the number of accidents (prevention).