This article describes the mammal brown hare. For the picture of the same name by Albrecht Dürer, see Brown Hare (Dürer) .

The brown hare ( Lepus europaeus ), also called hare for short , is a mammal from the rabbit family (Leporidae). The species inhabits open and semi-open landscapes. The natural range covers large parts of the southwestern Palearctic ; However, due to numerous naturalizations, the brown hare is found on almost every continent. Due to the strong intensification of agriculture, the number of the brown hare is declining in many regions of Europe. The German Wildlife Protection Association declared the brown hare Animal of the Year for 2001 and again in 2015 .

Skull of Lepus europaeus
Tooth formula of the brown hare

The fur is long, the top hairs are curved in most of the distribution area, they are only straight in the Caucasus and Asia Minor . The woolen hair has a white base. The back is variable yellowish gray, ocher brown or brownish red with yellow shades and mottled black. The flanks are more rusty yellow or reddish brown. Head and neck, chest and legs are light brown, the belly is creamy white. The ears are pale gray and show a black, roughly triangular spot at the tip. The tail is black on top and white on the underside. In winter fur , the sides of the head including the base of the ears are whiter and the hips are more gray.

The natural range of the brown hare covers large parts of the south-western Palearctic . It extends in a west-east direction from north-central Spain and Brittany to south-west Siberia and north-west Mongolia . In a north-south direction, the area extends from Denmark and - leaving out most of Scandinavia - from northern Finland to northern Spain, to northern Italy and to southern Greece; further east to the north of Iran . The species was naturalized mainly for hunting reasons in many other areas of Europe and beyond on other continents . In Europe, the species was established by humans in Great Britain and Northern Ireland , southern Sweden, Corsica and southern Italy. Today there are also large populations in the northeast of the USA , in the south of South America , in the south and east of Australia including Tasmania and in New Zealand .

The relatively warmth-loving species inhabits open and semi-open landscapes such as light forests, steppes , dunes and the agricultural landscape with hedges, bushes or adjacent forests from sea level up to 2500 meters.

In Brandenburg , statistical surveys at the beginning of the 21st century have shown that there are on average around 8-10 brown hares per square kilometer. Environmentalists and biologists are observing that more and more rabbit populations are moving to the outskirts or in large green areas of cities. The experts suspect that the cause is that the hares' natural enemies are rarely found here. The Lichtenberg district of Berlin has launched in 2016 an interactive project for observing and counting the population by all citizens to life. The census in the Berlin district of Lichtenberg resulted in a number of 15 individuals per square kilometer, which is 4 more than the national average.

The brown hare is predominantly crepuscular and nocturnal, especially at the beginning of the breeding season in late winter and in spring but also diurnal. The animals are solitary outside of the mating season and rest during the day in the shallow, usually well-covered hollows known as Sasse . In the event of danger, they "press" motionless to the ground and only flee at the last moment. Brown hares reach speeds of up to 70 km per hour over a short distance and jump up to 2 m high. The animals can swim well too.

Brown hares, like all real hares, have a vegetable diet. They eat green parts of plants, but also tubers, roots and grain, their appendix droppings ( caecotrophy ) and, especially in winter, the bark of young trees.

Males fight for a female who is ready to conceive, in the process they hunt and "box", that is, hit each other with their front paws. The tufts of hair torn out during these fights are called ramming wool in the hunter's language . The breeding season in Central Europe lasts from January to October, the females give birth 3 to 4 times a year. The gestation period is about 42 days. The litters include 1–5, exceptionally 6 young. The newly born young rabbits weigh 100–150 g and, like all rabbits, are pronounced “ nest -fledgers ”, they are born hairy and seeing. When they flee from the nest, the young rabbits live alone, but not abandoned and should neither be touched nor taken by people. The rabbit only comes to suckle about twice a day. The previously known maximum age in the wild is 12.5 years, but over half of the hares do not live to be a year old.

All over the world, hares are among the prey animals for predators and carnivores . In Europe, the different are predators , raptors and corvids , which prey in particular the majority of young rabbits.

Since the 1960s, the population has been falling sharply in many parts of Europe. The main reason is considered to be the strong intensification of agriculture, in particular the massive use of fertilizers and pesticides as well as the intensive use of machines. Investigations in the years 2004 to 2009 showed that the cultivation of winter cereals , rapeseed and maize in particular is having a negative effect on ever larger fields. Diminishing fringing, herbaceous and perennial corridors and a reduction in fallow areas by almost three quarters within the last ten years are significant factors in the decline in the population. In Germany, the species is therefore listed in the Red List as "endangered" (category 3), in some federal states such as Brandenburg and Saxony-Anhalt as "critically endangered" (category 2). According to the IUCN, the world population is considered to be not at risk (“least concern”).

Many rabbits find death in the streets. According to estimates by the German Hunting Association, around 60,000 brown hares fall victim to road traffic in Germany every year. The situation is similar in Austria, where there were around 23,200 rabbits in 2016.

Brown hares are hunted in almost all European countries . The usual in Germany hunting methods are the hunt and the individual raised hide . As fleeing small game , hares are traditionally hunted with shotguns and shotgun shells . In Germany, around 825,000 brown hares were shot in the 1985/86 hunting year , after which the number fell sharply and reached its lowest level in 1997/98 with 406,000 hunted animals shot. Since then the hunting routes have decreased again. In the 2015/16 hunting year, 242,000 hares were shot. According to the regional population differences, there are also very considerable differences here. The shooting in the entire area of ​​the new federal states was 9,000 hares at 3 percent, in Bavaria, North Rhine-Westphalia and Lower Saxony with a total of almost 200,000 at over 82 percent of the German hunting range . The closed season begins in mid-January.

In the 2015/16 hunting season, the hunting distance in Austria was 120,400 hares. Here, too, there are serious differences between the individual federal states. Lower Austria had by far the highest proportion with 66,300, which corresponds to 55 percent of the total distance. The closed season in Austria begins on January 1st every year. The last hunt is called Hasensilvester . For fur utilization see rabbit fur .

The term wild hare sometimes used is not a classification. However, it is used in connection with roast hare and other hare dishes.

In the course of centuries, its own mode of expression as who jargon of hunters developed that particular look and feel of the small game scoring MeisterLampe concern. The ears are called spoons, the eyes seers, the tail a flower. Because of his shape he is called the crooked one. When moving, the hare makes a characteristic escape trail and then goes into the Sasse.

Brown hare on the edge of the meadow 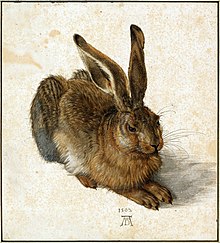 Depiction of a hare hunt from the Villa Romana del Casale

As a very common domestic animal, the hare has also found its place in fairy tales ( The hare and the hedgehog ), fables ( Meister Lampe ) and idioms (fearful hare, hare's foot, hare breading ). Its shyness, its speed, its agility and its long ears are proverbial. Along with the egg, it has become a symbol of fertility and Easter . In 751, Pope Zacharias described the brown hare in a letter to Boniface (probably referring to Jewish food prohibitions ) as unclean and prohibited its consumption. On the other hand, the Archbishop Theodore of Canterbury (602–690) allowed the consumption of rabbit meat and emphasized the health-promoting effects. In Roman times depictions of the hunt were a popular subject in art, and hare hunts are also shown more often in this context. The picture of a young brown hare by Albrecht Dürer is extremely well known. With the performance How to explain pictures to the dead hare , Joseph Beuys introduced the hare to modern action art in 1965 .

Animal of the year in Switzerland

Animal of the year in Austria