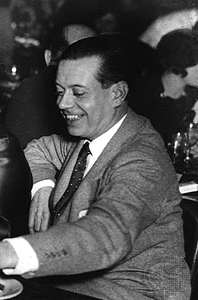 Cole Albert Porter (born June 9, 1891 in Peru , Indiana , † October 15, 1964 in Santa Monica , California ) was an American composer and songwriter . His best-known works include the evergreens Night and Day , Begin the Beguine and I've Got You Under My Skin, as well as the musical Kiss Me, Kate .

Cole Porter, who got his first name from his mother's surname, Kate, came from a very wealthy family on his mother's side who had made a fortune in Indiana in the timber trade. His two older siblings, Louis Omar and Rachel, died in childhood before he was born. Porter's musical inclination and talent showed, encouraged by his mother, quite early; at the age of six he began to play the violin. His first piano lessons followed two years later, and from then on he concentrated on this instrument. At the age of ten he wrote his first compositions, including The Song of Birds , a six-part piano piece dedicated to his mother.

From 1905 to 1909 Porter attended Worcester Academy in Massachusetts . After successfully completing school, his grandfather James Omar Cole gave him a trip to Europe, which made a great impression on him both musically and culturally. In 1909 Porter was enrolled at Yale University; from there he moved to Harvard in 1913 , where he initially continued to study law, but then enrolled in music in 1915. Already in his years at Yale University, Cole Porter was popular with students and professors because of his talent for entertainment. There he wrote several student and cheer songs, for example. B. Yale Bulldog , which are still played today. In 1915 his song Esmeralda appeared in the Broadway revue Hands Up with some success . His first own Broadway production See America First (1916), however, was not a success.

After the USA entered the First World War in the spring of 1917, Porter went to France as a volunteer for an American aid organization. After the war ended in 1918, he stayed in Paris , where he attended the Schola Cantorum , a private music college under the direction of Vincent d'Indy . In the same year he met the wealthy, eight years his senior, Linda Lee Thomas, and married her in December 1919, regardless of his homosexuality . Porter's grandfather died in 1923, leaving a sizable legacy. Cole Porter got nothing, but his mother got millions that she shared with Cole. The Porters spent the years up to 1928 mainly in Europe, especially in Paris, Venice and on the Riviera , led a free, carefree life and traveled extensively. At the end of the 1920s, Porter worked increasingly full-time and with growing success as a composer and lyricist and returned to the USA. His breakthrough came with the musical production Paris (1928), to which his friend Irving Berlin had helped him. More successful pieces followed, and soon Porter had established himself as one of the great songwriters in the United States and received the title "America's Great Sophisticate". From 1935, the Porters began to spend more and more time in Hollywood , where the film business was booming.

In October 1937 he had a serious riding accident that fundamentally changed his life. He suffered severe leg injuries and his wife, who had been separated from him in Paris and toyed with the idea of ​​divorcing him, immediately returned to his side. The doctors urged to amputation of his legs, but she refused because she was convinced that this would lead his will to live in the loss. The consequences of this accident later made over 30 operations necessary and accompanied him for the rest of his life. Since then he has been dependent on crutches, and playing the piano has caused him difficulties at times. However, he seemed to have retained his sense of humor: “It just goes to show fifty million Frenchmen can't be wrong. They eat horses instead of ride them. ”(“ It simply shows that 50 million French people cannot be wrong. They eat horses instead of riding them ”).

In 1952 his mother, with whom Porter had a deep relationship, died. Two years later his wife Linda also died. The loss of his wife in particular hit Cole hard. In 1958, on the advice of his doctors, his right leg had to be amputated. He became increasingly depressed and lived a secluded life. There are also reports of alcohol problems . He visibly lost his will to live; to his long-time confidante Arnold Saint Subber, Porter repeatedly stated that he wanted to die. Cole Porter died on 15 October 1964 at the age of 73 years at a hospital in Santa Monica to kidney failure .

Cole Porter has composed around 40 complete musicals and written the associated lyrics, many of which have become evergreens . His style is usually described as elegant or sophisticated. His talent as a lyricist expressed itself in many unusual and funny lines, which are often spiced with word games and therefore often caused him problems with censorship.

He was already writing pieces in his college years, but his real breakthrough came with Paris in 1928. Through the influence of his friend Irving Berlin , who was himself a composer and was already one of the great American composers, Porter was awarded the contract for the musical . It became a hit show in no time, and others followed. Gay Divorce or Anything Goes were on everyone's lips back then. After his serious riding accident, Porter fell into depression, his work was difficult - also because of the strong medication - and he had problems finding the money for a Broadway production. Several of his shows flopped in these years and his critics saw his star as extinct. But with Kiss Me, Kate from 1948 he landed another spectacular coup that became a worldwide success and is still played today. For his last major Broadway production, Silk Stockings , Porter brought Hildegard Knef to New York as the leading actress in 1954 .

Many of his pieces have become jazz standards and evergreens , including Night and Day , Begin the Beguine , What Is This Thing Called Love? , Easy to Love , You'd Be So Nice to Come Home To , Anything Goes , You're the Top , Just One of Those Things , I Get a Kick out of You , Love for Sale , True Love or I've Got You Under My Skin . Porter is one of the composers and lyricists of the Great American Songbook . Nowadays, the interpretations of such pieces by great jazz musicians are often better known than the original versions. Many songs were sung by the world's most famous interpreters in jazz and its fringes, including Frank Sinatra , Louis Armstrong and Ella Fitzgerald , who recorded two records with his songs in 1956 with Sings the Cole Porter Songbook Vol. 1 and Vol. 2 .