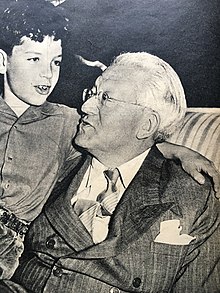 Artur Rodziński (born January 1, 1892 in Split , Austria-Hungary ; died November 27, 1958 in Boston ) was a Polish conductor who worked in the field of opera and symphonic music.

Rodziński, a son of the Austro-Hungarian military doctor Herman Rodziński (Hermann Rittigstein) (1862–1925) and the musician Jadwiga born. Wiszniewski (1870–1950), grew up in Lemberg . He studied law at the University of Vienna and graduated with a doctorate in 1916. At the same time he studied composition with Joseph Marx and Franz Schreker , orchestral direction with Franz Schalk and piano with Emil von Sauer at the Vienna Music Academy . 1918-1919 he was conductor at the Lviv Opera , 1920-1925 at the Warsaw Opera and Philharmonic .

At the invitation of Leopold Stokowski he came to the USA , where he conducted the Philadelphia Orchestra as his assistant (1926-29). He then shaped renowned orchestras in the country as chief conductor, first the Los Angeles Philharmonic (1929–33), then the Cleveland Orchestra (1933–43), which he, a US citizen since 1933, developed into a nationally important orchestra. In 1935 he directed the US premiere of Shostakovich's opera Lady Macbeth of Mtsensk here . In 1936 he made his first guest appearance at the Salzburg Festival , where he conducted the Vienna Philharmonic . During this time he put together the NBC Symphony Orchestra on behalf of Arturo Toscanini in 1937 .

In 1943 Rodziński became music director of the New York Philharmonic , with whom he had already worked in 1934 and in 1937 performed Richard Strauss ' Elektra with Rose Pauly . He opened his term of office with the spectacular dismissal of 14 musicians including the concertmaster. In his repertoire he also increasingly relied on American composers, premiering works by Roy Harris , Walter Piston , William Grant Still and Lukas Foss , as well as works of the popular genre by Vernon Duke and Jerome Kern . In 1943 he hired Leonard Bernstein as Assistant Conductor and in the same year helped the then 25-year-old to his first breakthrough as a substitute for Bruno Walter .

During this time Rodziński was one of the most famous conductors in the USA. However, friction with manager Arthur Judson in 1947 led to Rodziński's departure. In the same year he became chief conductor of the Chicago Symphony Orchestra , a move that caused a sensation and was featured as the cover story in Time Magazine . One of the highlights of his tenure, which was barely a year old, was the performance of Wagner's Tristan und Isolde with Kirsten Flagstad . After conflicts with the management, Rodziński's contract was terminated in 1948.

For health reasons he limited himself to guest conducting in the next few years and was a. a. active in the US, Latin America and Europe. He finally settled in Italy, conducted for the first time in 1950 at La Scala in Milan and in 1953 directed Prokofiev's War and Peace at the Maggio Musicale Fiorentino , the first performance of this opera outside the Soviet Union . Despite his increasingly fragile health, he returned to Chicago in 1958 again returned and conducted at the Lyric Opera again Tristan and Isolde with Birgit Nilsson . He died of heart failure in Boston just a few days after his last appearance there.

His second wife, Halina Rodzińska b. Lilpop, left a biography of Our Two Lives .

A selection of his recordings under the title The Art of Artur Rodziński was released on 19 CDs by the Scribendum label in 2017 .