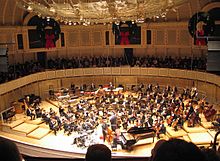 The founding music director Theodore Thomas worked as chief conductor from 1891 to 1905; Then came a long phase under Friedrich August Stock , 1905 to 1942, from which, however, only a few sound recordings exist. Towards the end of Stock's tenure in 1936, Hans Lange (like Stock from Germany and for many years assistant to Arturo Toscanini ) joined the CSO, where he initially worked as Stock's assistant and later until 1946 as “associate conductor”. Shorter periods under Désiré Defauw (1943–1947), Artur Rodziński (1947–1948) and Rafael Kubelík (1950–1953) followed. But it was Fritz Reiner , who was obsessed with precision and feared by orchestral musicians, who established the orchestra's international reputation between 1953 and 1963. After Jean Martinon (1963–1969), Sir Georg Solti took over , who was able to build on Reiner's heyday until 1991, albeit with a different, more dashing and less sonorous style. In 1991 Daniel Barenboim was elected as successor by the orchestra. He held his post until the end of the 2005/06 season. The orchestra selected Riccardo Muti as its new chief conductor from the 2010/11 season. Until then, Bernard Haitink and Pierre Boulez took over the management of the orchestra.

The orchestra performs in the Chicago Orchestra Hall (sometimes called Theodore Thomas Orchestra Hall after the orchestra's founder). The complex, built in 1904, was radically rebuilt in 1966, so that the extraordinarily round sound was lost. Due to the now dry and narrow soundscape, the sound recordings were mostly made elsewhere, especially in the Medinah Temple . In 1997 another phase of renovation ended, one of the aims of which was to restore the old sound. The sound actually gained audibly in breadth and beauty, only now the musicians complained that they could no longer hear each other. By means of various improvements, a bearable condition should have been achieved in the meantime.