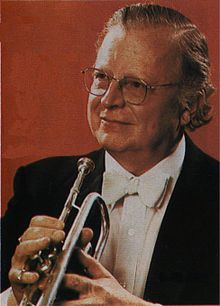 After high school, he studied mathematics at Luther College, then did military service on the Pacific Front. From 1946 to 1948 he studied trumpet with Georges Mager and Marcel Lafosse at the New England Conservatory and, after graduating in 1948, was appointed principal trumpeter of the Chicago Symphony Orchestra (CSO) by Artur Rodziński , a position he held until 2001 Held for years.

Herseth was considered an important trumpet virtuoso and, like no other orchestral musician, shaped the sound physiognomy of his ensemble: the unique Chicago sound , which was shaped by the brass group . Famous particularly his interpretation was Trumpets votes not the Mahler - Symphonies under Sir Georg Solti , Giulini and Pierre Boulez , of Modest Mussorgsky's Pictures at an Exhibition by Rafael Kubelik and numerous photographs from the 1950s and 1960s years under Fritz Reiner, as well as the Bruckner symphonies under Solti and Daniel Barenboim . Records with Herseth and the CSO have been awarded a Grammy over fifty times . Herseth also appeared as a soloist with the second Brandenburg Concerto by Johann Sebastian Bach and the trumpet concertos by Joseph Haydn and Johann Nepomuk Hummel .

He received several honorary doctorates and in 1996 was the first and only orchestral musician to be awarded the “Instrumentalist of the Year” award from Musical America magazine .