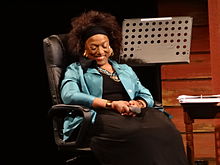 Jessye Norman (born September 15, 1945 in Augusta (Georgia) ; † September 30, 2019 in New York City ) was an American opera singer ( soprano ). Her repertoire were among other operas and songs of romance a priority, it is also as an interpreter of spirituals and jazz emerged and has won five Grammys excellent.

Jessye Norman was born in 1945 to a teacher and insurance agent in Georgia . The parents were active in the American civil rights movement and were amateur musicians, the mother a pianist , the father a singer in a church choir . Even in her childhood, Norman liked to sing often and often. According to her, a formative experience was a radio feature with Marian Anderson and Rosa Ponselle , which she was deeply impressed by.

She received a scholarship to Howard University , where she studied music and graduated with a bachelor's degree in 1967 . She also took singing lessons from Alice Duschak in Baltimore and Pierre Bernac in Michigan . In 1968 she won first prize at the ARD international music competition in Munich . She then made her debut in 1969 in the role of Elisabeth in Richard Wagner's Tannhäuser at the Deutsche Oper Berlin . During the second break at Tannhauser , she was offered a four-year engagement, which she accepted. There she sang the role of Countess Almaviva in Mozart's Le nozze di Figaro and, in January 1972, the title role in Verdi's Aida in a new production under the direction of Claudio Abbado .

In the following years she appeared with various German and Italian opera ensembles, in 1972 she made her first guest appearance at La Scala in Milan under the direction of Claudio Abbado in the role of Aida in Verdi 's opera of the same name . In the same year she sang Cassandra in Les Troyens by Hector Berlioz for the first time at the Royal Opera House Covent Garden in London . She had her first appearances in the USA from 1972 in Los Angeles and 1973 at Lincoln Center . In the following three years she developed a diverse concert and opera activity, which led her to the Maggio Musicale Fiorentino , where she participated in performances of Giacomo Meyerbeer's Die Afrikanerin and Georg Friedrich Handel's Deborah .

It was around this time that Norman began to concentrate more on the song repertoire that proved to be particularly suitable for her voice. Until 1980 she did not sing any other operas, but concentrated exclusively on the world of songs, in which she developed a remarkable repertoire. Her specialties included Wagner's Wesendonck songs , the Gurre songs by Arnold Schönberg and Alban Berg's Altenberglieder . In addition, she dealt extensively with French composers such as Henri Duparc , Francis Poulenc , Gabriel Fauré and the songs of the Russian Modest Petrovich Mussorgsky .

From 1981 she gave repeated recitals at the Salzburg Festival , where she could also be heard in 1987 under Herbert von Karajan with Isolde's Liebestod . In 1982 she returned to the opera stage with the part of Dido in Henry Purcell's opera Dido and Aeneas ( Philadelphia ). In 1983 she first appeared in the Metropolitan Opera , where she sang Cassandra in Les Troyens again in the anniversary production for the 100th season of the house. In 1985 she sang the title role in Ariadne auf Naxos at the Vienna State Opera .

In the 1980s and 1990s she could be heard at many major concert halls, including the Lyric Opera in Chicago (debut in 1990 with Christoph Willibald Gluck's Alceste ), Scala, the Philharmonie Berlin and the Royal Opera House in London. Norman performed at festivals in Verbier , Saito Kinen , Aix-en-Provence and Salzburg and sang the Marseillaise on the occasion of the 200th anniversary of the French Revolution. In 1996 she opened the Atlanta Summer Olympics . Since the 1990s she also began to work in jazz and developed programs with music by Michel Legrand and Duke Ellington .

In 2015, Norman suffered a spinal cord injury , from the consequences of which she died on September 30, 2019 in a hospital in Harlem .