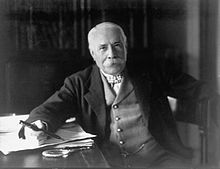 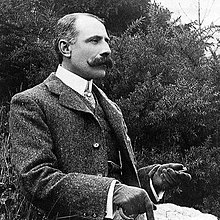 Sir Edward William Elgar, 1st Baronet (born June 2, 1857 in Broadheath near Worcester, † February 23, 1934 in Worcester ) was a British composer . His most famous work is the Pomp & Circumstance March No. 1 . The middle section is also known around the world as the Land of Hope and Glory anthem and is considered the UK's most important unofficial anthem; the piece is a highlight of the annual Last Night of the Proms .

Edward Elgar was the son of the music dealer, piano tuner and organist William Henry Elgar (1821-1906) and spent his first years on his parents 'music store , the Elgar Brothers' Music Shop . He was the fourth of seven children. His mother, Ann Elgar, nee Greening, had converted to Catholicism against her father's will , and she raised her children Catholic. 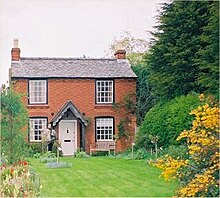 Elgar played various instruments early on . After a short work at a notary, he got into his father's business. At the age of sixteen he decided to complete a musical education. In 1877 he was inducted into the Worcester Glee Club and became the director of the new Worcester Amateur Instrumental Society . He led the rehearsals and started playing the bassoon . He set up an atypical wind quintet with the existing musicians, consisting of two flutes, oboe, clarinet and bassoon, where he often played the bassoon. It played under the name "The Sunday Band" or "The Brothers Wind". He wrote the chamber music for this line-up himself, simple and pleasing utility music for the Sunday performance. He described this music in a 1905 interview in The Strand Magazine

"In the early days of which I have been speaking five of us established a wind quintet. We had two flutes, an oboe, a clarionet, and a bassoon, which last I played for some time, and afterwards relinquished it for the 'cello. There was no music at all to suit our peculiar requirements, as in the ideal wind quintet a horn should find a place and not a second flute, so I used to write the music. We met on Sunday afternoons, and it was an understood thing that we should have a new piece each week. The sermons in our church used to take at least half an hour, and I spent the time composing the thing for the afternoon. It was great experience for me, as you may imagine, and the books are all extant, so some of that music still exists. We played occasionally for friends, and I remember one moonlight night stopping in front of a house to put the bassoon together. "

“In the early days of which I spoke, five of us would form a wind quintet. We had two flutes, an oboe, a clarinet and a bassoon. I played the latter myself for a while until I later gave it up in favor of the cello. There was no music at all that would have suited our peculiar needs, since in an ideal wind quintet there should be a horn and not a second flute; that's why I mostly wrote the music. We met on Sunday afternoons, and it was a given that we had a new piece every week. The sermons in our church usually lasted at least half an hour, and I spent the time composing the piece for the afternoon. It was a great experience for me, as you can imagine, and since the books are all still there, some of those pieces of music are still around. Occasionally we played for friends, and I remember one moonlit night when I stood in front of a house to put the bassoon together. "

The promenade with titles such as Madame Tussaud or Waxworks is one of the early works .

In 1877 Elgar took violin lessons from Politzer in London ; as a composer he was self-taught . In 1880 the violinist and friend Karl Bammert joined the group. Some quintets followed with violin instead of second flute. The group existed until 1882.

In 1882 Elgar became concertmaster in Worcester and in 1885, succeeding his father as organist at St. George's Church. In 1889 he married his piano student Caroline Alice Roberts, moved to Malvern ( Worcestershire ) and has lived as a freelance composer ever since. She supported her husband in his work and acted as his "manager". The couple had a daughter, Carice (1890–1970). In 1879 he worked as the bandmaster of the Attendants Orchestra at the Country Lunatic Asylum for a salary of £ 32 a year; in addition, there were five shillings for every polka or quadrille he composed.

His first cantatas The Black Knight (1893) and King Olaf (1896) as well as the oratorio The Light of Life (1896) earned him recognition, but Elgar's breakthrough as a composer came in 1899 with his Enigma Variations and a year later with the oratorio The Dream of Gerontius for the Birmingham Triennial Music Festival . The Enigma Variations, a large-format orchestral work with 14 character variations, each symbolizes a personal trait of a friend of the composer in artistically colored instrumentation and ties in with the great tradition of orchestral variation in 19th century music.

Established as a composer

1904. Knights defeated, Elgar was shortly afterwards professor at the University of Birmingham . He was also a member of the renowned Garrick Club . In the years before and during the First World War , Elgar created three chamber music works in addition to patriotic pieces, the elegiac cello concerto and the concerto for violin and orchestra, completed in 1910, which he composed at Fritz Kreisler's request and which followed the tradition of large-scale romantic concerts such as Beethoven's and Brahms posed. It was a great success with the public and is still played by leading violinists today. With a length of around 50 minutes, it is one of the longest instrumental concerts in music history. The 1st symphony was particularly successful, while the 2nd symphony was received with less approval, possibly due to the introspective finale. One of the underestimated works is the organ sonata in G major, which is an important English contribution to virtuoso organ symphonies and differs from other English organ sonatas (e.g. Basil Harwood, Charles Villiers Stanford) through its orchestral setting and the complete lack of "organ-typical “Elements like chorale or fugue distinguishes itself. In 1911 he was accepted into the Order of Merit (OM).

His best known work is Land of Hope and Glory based on the Pomp and Circumstance March No. 1 . Next to Rule, Britannia! and God Save the Queen / King it is the most famous British anthem. Among other things, it is played annually at the Last Night of the Proms and as the English national anthem at the Commonwealth Games . Because of the great popularity of this work, Elgar's musical output was - largely wrongly - limited by posterity to his patriotic works. In his work "Sea Pictures, op. 37" Elgar sets the poems of several English poets and a poem by his wife "In Haven" to music.

The death of his wife Caroline Alice in 1920 let Elgar's creative power dry up. In addition, his compositional style was viewed as old-fashioned in the 1920s. Nevertheless, in 1924 he was named " Master of the King's Music ". In 1928 he was accepted as a Knight Commander in the Royal Victorian Order (KCVO). In 1929 he was elected as an honorary foreign member of the American Academy of Arts and Letters . On June 23, 1931 he was given the hereditary title of Baronet , of Broadheath in the County of Worcester. In 1933 he was appointed Knight Grand Cross of the Royal Victorian Order (GCVO). Once again he devoted himself to the composition with the Severn Suite . When he died in 1934, two works remained unfinished: the 3rd symphony and an opera "The Spanish Lady". The sketches for these works were drawn up by Anthony Payne and Percy Young.

After the death of his wife, Elgar retired to Worcestershire to lead the life of a country gentleman with his dogs. Sir Edward Elgar died of colon cancer at the age of 76 and was buried with his wife in St. Wulstan's Churchyard in Little Malvern . His baronet title expired on his death, as he left no sons.

Away from the music 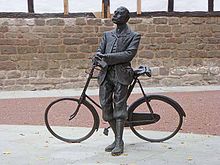 Elgar with his bike. Memorial in the grounds of Hereford Cathedral

Already in 1900 had acquired for himself and his wife Edward Elgar bicycles, its brand Royal Sunbeam he called Mr. Phoebus . With this bike he went on numerous tours in the following years, which he carefully marked on maps. The Elgar Vintage Ride has been taking place regularly for a number of years in Malvern , a place he often went to by bike . He was also interested in chemistry and set up his own laboratory in his house in Plas Gwyn in Hereford , where he lived from 1904 to 1911.

Elgar was also an avid supporter of the Wolverhampton Wanderers football club , for which he composed his own song Banged The Leather for Goal , which, however, was only performed publicly in 2010.

Edward Elgar was the first outstanding composer to work in England since George Frideric Handel . Elgar is considered an important representative of the musical late romanticism . In many cases he was viewed all too limitedly only as a pomp and circumstance composer and representative of a bygone imperial era. Yet his best works show a composer of remarkable musical sensitivity. His revival of the oratorio genre is also commendable .

In 1991 the asteroid (4818) Elgar was named after him. The Elgar Uplands , a mountain range on the West Antarctic Alexander I Island , have borne his name since 1961 .

A river cruise ship on the Severn is named Edward Elgar .

A letter that Elgar wrote to Dora Penny (1874–1964), who was friends with the Elgar family, was accompanied by a note with an apparently encrypted message. A decryption proposal as Dorabella Cipher known codes laid only 112 years later before the Australians Tim S. Roberts.

liturgical works with orchestra (alternatively can be performed with organ)